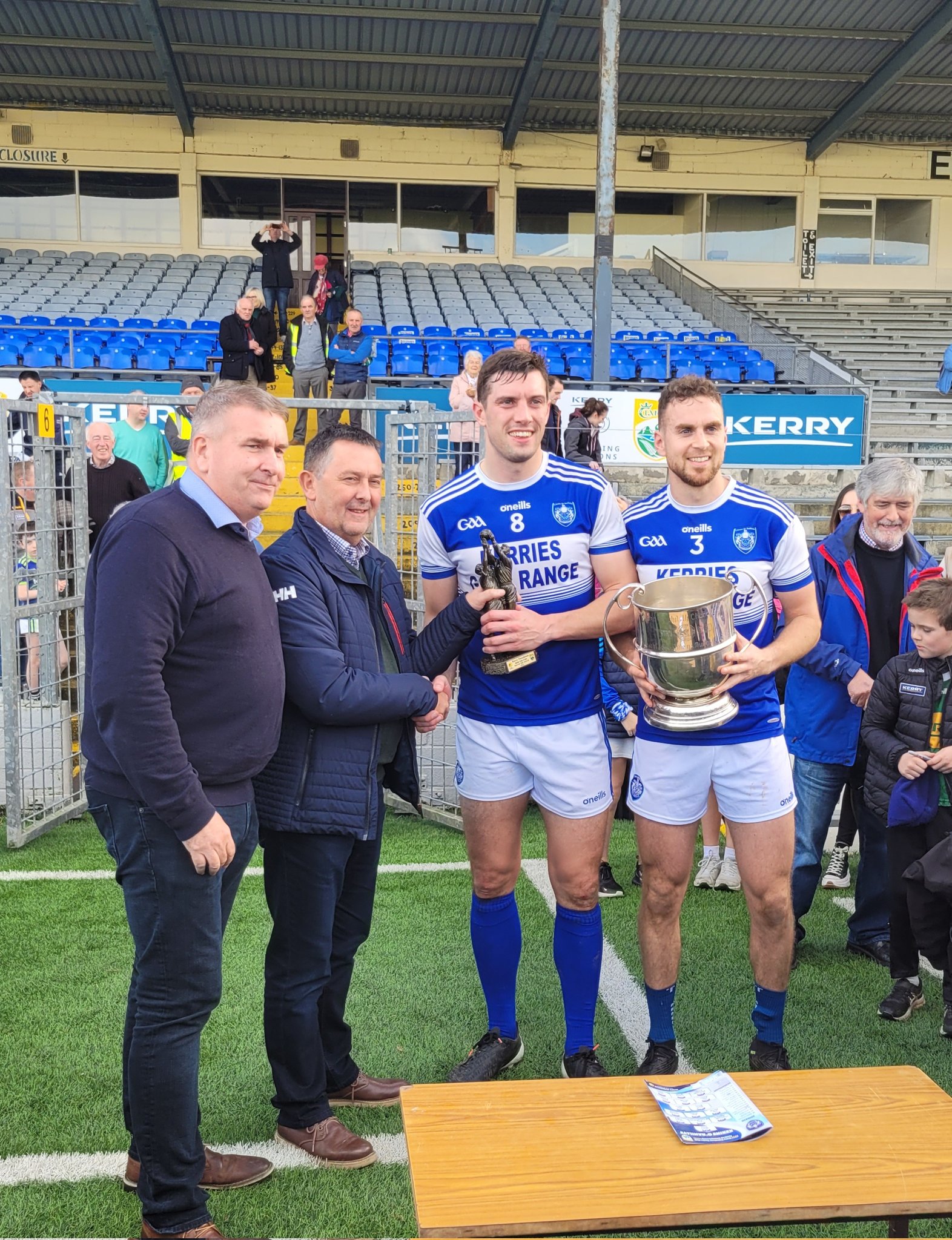 Courtesy of John O’Dowd, The Kerryman

In the end, it all came down to one kick of a ball. Trailing by the minimum, five minutes into injury-time, Killian Spillane stood over a 35 metre free for Templenoe. With nine points already on the board in a fine individual display, the inter-county star had certainly delivered the goods. But this was serious pressure.

Lofting the ball high in the trajectory of the posts at the Dalton’s Avenue end of Fitzgerald Stadium, time appeared to stand still for a few seconds. The shot looked on target, as Kerins O’Rahillys’ David Moran rose high to try and gather.

Did he get a touch? Potentially yes. The ball careered onto the post, close to the goal-line, and was eventually cleared. The Tralee side are now county senior club champions.

Spillane and his Templenoe colleagues left crest-fallen after failing to take the game to extra-time. Man-of-the-match Moran, and his O’Rahillys’ team-mates, ecstatic after crawling over the line, to bring a piece of silverware, and a much-coveted place in the provincial campaign, home to Strand Road. What an action-packed finale to a very decent encounter.

When all is said and done, William Harmon’s charges just about deserved to edge it. Moran held sway for long spells at midfield, their attack moved with great penetration and invention in the first half, and Jack Savage’s free-taking was absolutely pivotal on the resumption. Paul Crowley’s Templenoe gave as good as they got, but for the most part, they were chasing from behind.

The first half was a tale of Kerins O’Rahillys looking the more cohesive attacking unit, benefiting from the dominance of Moran around the centre of the field. On the other hand, through grit and perseverance, Templenoe managed to stay hot on their heels, Killian Spillane’s accuracy proving to be hugely important.

It was the Strand Road men who got off to the proverbial flyer, however, with Gavin O’Brien winning, and then scoring from, the throw-in, and corner-forward Conor Hayes adding another point within the opening minute. A fantastic long-range effort from Templenoe’s Josh Crowley Holland got them off the mark, but the Tralee side continued to ooze confidence up front.

By the seventh minute, the gap was out to four points, 0-5 to 0-1, Tom Hoare and Tommy Walsh notching nice scores from play but, not for the first time in the half, Templenoe, commendably, regathered their composure, and three points on-the-trot, including a beauty from superb corner-back Brian Crowley, had them back in touch by the end of the first quarter.

Once more, Kerins O’Rahillys put the foot on the accelerator, with Moran on top in his personal duel against fellow Kerry star, Adrian Spillane. Two points from Barry John Keane, and another from full-forward Walsh, moved Strand Road four clear again, 0-8 to 0-4, entering the last ten minutes of the half. Yet again, Templenoe were not flustered.

Three unanswered minors from star forward Spillane (one from play) narrowed the deficit again, and even though a Jack Savage free, and a magnificent point from play by Cormac Coffey, had O’Rahillys three ahead, 0-10 to 0-7, Templenoe fought back in style, the ebullient and influential Spillane with two more white flags before the half-time whistle.

After such a free-scoring opening half (19 scores registered, and only four wides), both outfits notably focused on attempting to shut up shop a bit better at the back on the resumption. With much more pressure being put on the respective shooters on either side, the entertainment levels dropped a degree or two, though the closeness of the exchanges kept the attendance on their toes.

Now was the time for Jack Savage, who returned home from Dubai for the game with team-mate Coffey, to take centre stage. A lively playmaker in the O’Rahillys’ forward unit all afternoon, the number eleven showcased his outstanding repertoire of dead-ball kicking, with three pointed frees on the spin, to push his side three clear again by the 52nd minute, 0-15 to 0-12.

The Strand Road side appeared to have the bit between their teeth now, but with time running out, as they had showed from the opening whistle, Templenoe were never going to throw in the towel. Stephen O’Sullivan was narrowly wide with a fisted effort at goal, Spillane tapped over another free, and O’Sullivan blazed over from close range in the first minute of injury-time.

O’Rahillys’ substitute Ben Hanafin had missed a chance to kill the game off when his close-range strike at goal was deflected to safety, Conor Hayes punched wide when another opportunity presented itself, and the Tralee men were left to live on their nerves – right up to that last-gasp Killian Spillane nail-biting moment. It was that sort of fascinating conclusion.