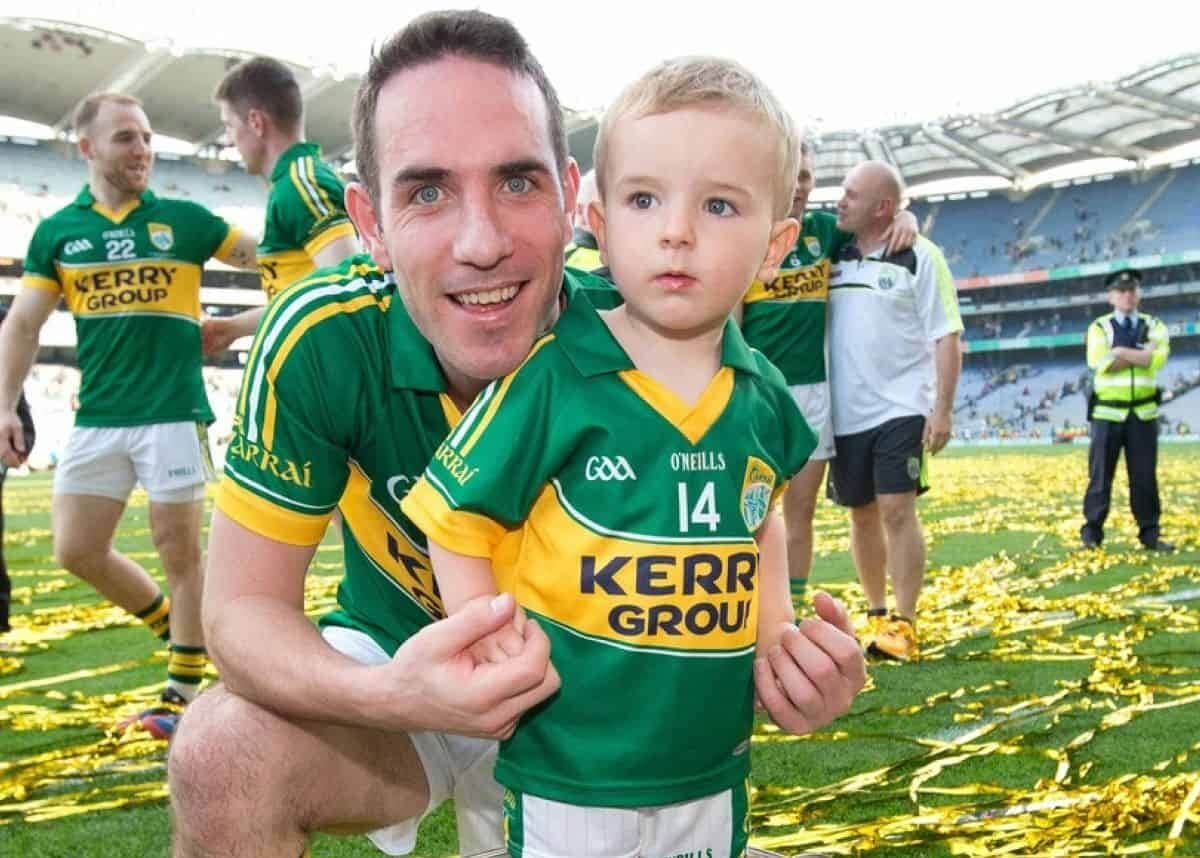 Declan O’Sullivan, who has announced his retirement from inter-county scene, does so having won every honour available to him with his beloved Kerry during a senior intercounty career that stretches back to 2003.

OâSullivan, who made his championship debut against Tipperary in 2003, has the distinction of being one of only 8 players to lift the Sam Maguire more than once (2006 and 2007) following in the footsteps of fellow Kerrymen such as Dick Fitzgerald, John Joe Sheehy and Joe Barrett. In all he made 70 Championship appearances for Kerry, the last of which was in the recent All Ireland defeat of Donegal when he was introduced as a second half sub to win his fifth Celtic Cross. He won three consecutive GAA All Stars between 2007 and 2009. Though plagued with injury this year he still played an outstanding role in Kerryâs championship success and few will forget his display in the Munster final defeat of Cork in PÃ¡irc UÃ­ Chaoimh in July. Declan also has the distinction of lining out in every position on the forward line for Kerry in senior championship.

On the Club scene he was no less successful winning County and Munster Junior medals and four senior county championship titles with divisional side South Kerry.

OâSullivanâs retirement sees him follow in the footsteps of such fellow legends as TomÃ¡s Ã SÃ©, Eoin Brosnan and Paul Galvin all of whom have hung up their boots in the past year.

“Today, I would like to announce my retirement from inter-county football.

It has been an incredibly difficult decision to arrive at but, after a lot of consideration, I feel now is the right time. Unfortunately, due to some long-standing injuries, it would be impossible for me to physically compete at the required level in 2015. Hopefully, after a long rest and some corrective work on my knees, I will be able to enjoy playing with my club for a number of years to come.

It has been a huge honour for me to wear the green and gold for the past 15 years, with 13 of those at senior level. I shared this fantastic journey with incredible team-mates. I would like to thank each and every one of them for their friendship and support throughout my career. Being part of a group with such spirit, togetherness and toughness, during good times and bad, has been the highlight of my career. It has also been a huge honour to compete against great teams and players during this time. I have huge respect and admiration for all those players.

I have been very lucky to play for four exceptional managers; PaidÃ­ Ã SÃ©, Jack OâConnor, Pat OâShea and Eamonn Fitzmaurice. They have all been fantastic pillars of support for my career in their own unique way. The confidence and support they have each given me made it easy to make the huge sacrifices required to play at this level. I would also like to thank the many selectors, trainers and backroom team members, who I have enjoyed working with over the years.

I would like to give a special thanks to Charlie Nelligan, who first gave me the opportunity to wear the green and gold at minor level. Playing for Charlie quickly gave me an appreciation of the attitude and passion required to play for Kerry. I would also like to thank the Kerry County Board, along with our sponsors Kerry Group, who have always given great support and assistance to all Kerry teams.

I would especially like to thank my club Piarsaigh na Dromoda for all the help and support they have given me. It was a huge honour for me to represent them on the county team for so long. I hope this decision to retire from Kerry will now give me a better chance to play a few more years with my club, and, similarly with South Kerry who I was fortunate to win county senior titles with – which was another huge honour.

I would like to thank the Kerry supporters for all the support and kindness shown to me throughout my career. Your appetite for winning is what keeps driving the players to constantly perform at the highest level.

Most importantly I would like to thank my wife Michelle. Without her loving support and sacrifice down through the years, it would have been impossible for me to give the required commitment to play for as long as I did. I am so grateful to her for allowing me to chase my dreams and I look forward to spending more time with her and our two boys, Ollie and Robbie, into the future. One of the greatest joys in my life was celebrating the All-Ireland in September on the field with Ollie afterwards. With Robbie arriving days later, I look forward so much to bringing the lads to Kerry matches in the near future as a Kerry supporter.

“I would also like to pay a special thank you to the rest of my family, who were always there for me, during good times and bad. I would also like to similarly thank all my friends for all their unconditional support throughout my career. That faith and confidence always shown in me by family and friends was a great assistance to me throughout my career.

“Finally I would like to wish Eamonn and his management team, and all the lads, the very best for 2015. I look forward to watching them carrying on the great tradition of Kerry football over the coming years.”

âOn behalf of the Kerry management and players I would like to congratulate Declan OâSullivan on his retirement. PÃ¡idÃ­ Ã SÃ© brought Declan into the squad in the summer of 2002 just after he completed his Leaving cert and he has been ever present since. He has won everything and has lifted Sam Maguire twice as captain. His honesty, the warrior like way he leads by example and his innate football ability meant his team mates loved him. He also has a stubborn streak that meant he always fought his corner obstinately, be it in an argument or to win a breaking ball that might turn a game. That obdurate part of his character meant he was never beaten and was probably the trait that endeared him most to the Kerry faithful.

This summer, while occasionally frustrating because of injury, was ultimately very rewarding for Declan. He trained hard in the lead into the championship and was as fit as he ever was come the start of the Munster championship. His display in the Munster final was one of the great performances. One of his biggest strengths was to the fore that day as his game intelligence allowed him to dictate the terms of battle for Kerry. He was always excellent at reading what a game required and delivering that. His knees deteriorated as the summer went on. His stubborn streak drove him and he refused to yield to them. He had to train individually for much of the latter part of the summer but still influenced the group massively both on and off the pitch. This was typical of his determination. His honesty as a team mate was always appreciated. The respect that he has in our dressing room is absolute.

He has the personality to go into management. He is the ultimate team player, has a great appreciation of the team dynamic and combined with an intelligent understanding of the game is well suited to it. I can definitely see him managing Kerry teams in the future.

âHis retirement has come as a surprise to me. He will go down as one of the truly great Kerry players and as well as the contribution he made to the County, he was also a great clubman with both Dromid Pearses and South Kerry as well as with his School, Colaiste na Sceilge with whom he won an All ireland Vocational title in 2000 the year the school was opened. He went on to Captain the school to 2 Corn Ui Mhuirí­ titles in a row and went agonisingly close to winning the Hogan Cup against a Michael Meehan powered St Jarlaths side in 2002.

He was a fantastic player, even at a very young age and one of the great Kerry forwards of all time â thereâs no question about that. He had a remarkable resilience about him â he played right into November and December almost every year with Dromid and South Kerry and was a target for special attention in every game and the tougher it got, the better Declan would get! The way he handled himself in 2006 after losing his place on the team, the resilience he showed and the resolve to get back on the team and go on to lift the Sam Maguire was testament to his mental strength.

One of the highlights of my career, and indeed my life, was to see him bring Sam Maguire back to Dromid and South Kerry in 2006â.

âAs Kerry people we all owe Declan OâSullivan a great debt of gratitude for the outstanding service he has given to the county in a career that stretches way back to his Minor days in 2001. Declan will be a huge loss to the Kerry setup, both as a player on the field of play and on the training field and in the dressing room where his leadership qualities were never more evident than in this yearâs championship campaign where he nurtured the younger players around him. Declan played 128 senior games for Kerry, scoring a massive 16 goals and 139 points in the process and he had of course the rare and unique honour of captaining the Kingdom in back to back Sam Maguire triumphs, a feat that Kerry GAA folk are unlikely to forget. It was fitting that, despite carrying injuries during the latter part of the championship of 2014, he saw out his Kerry career on the Croke Park pitch that he adorned so impressively over the years.

To Declan, his family Michelle, Ollie and Robbie, I extend a sincere thank you on behalf of the Gaels of Kerry.