Opening round victory for Cork in Munster Hurling League 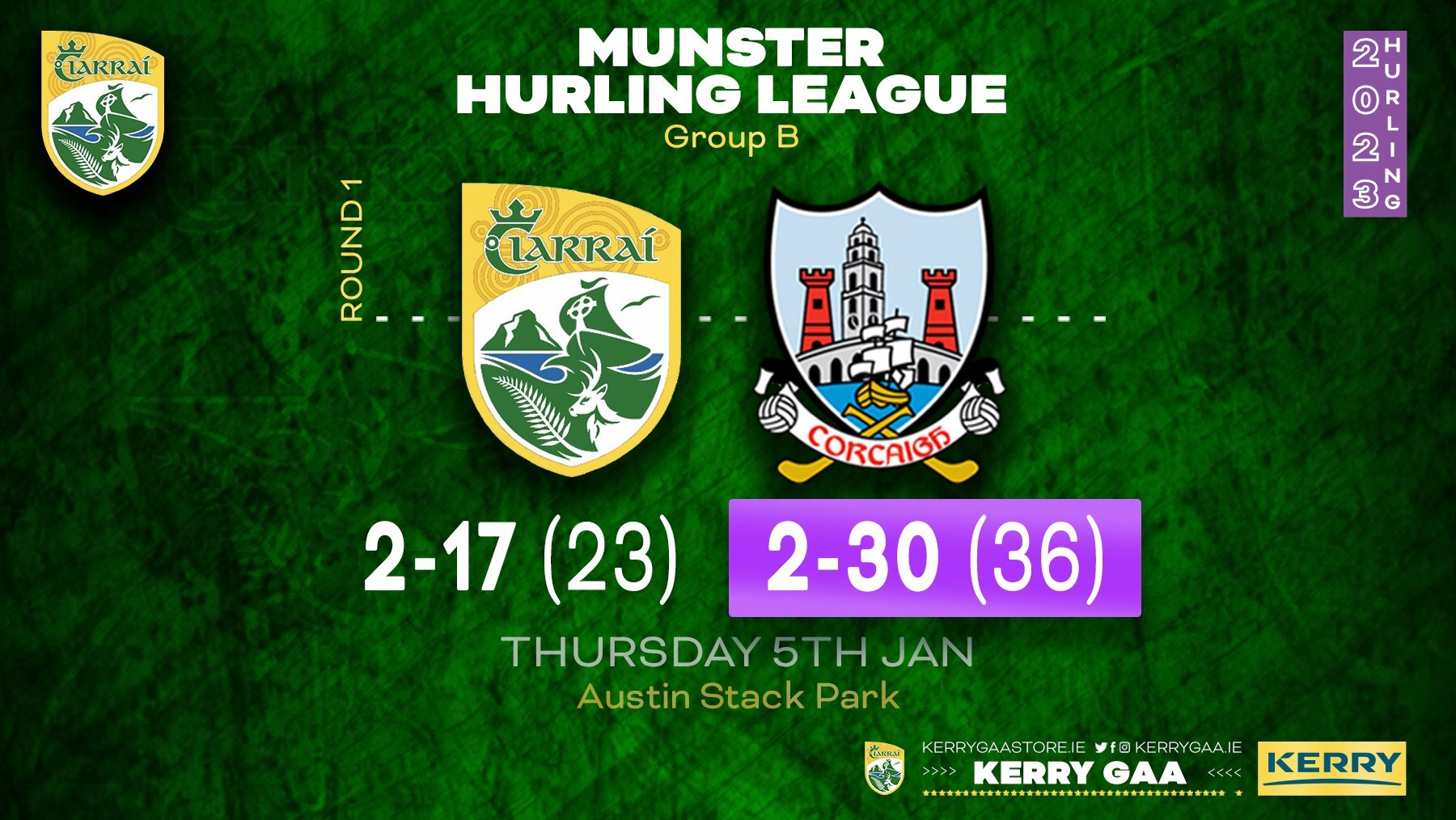 Report by Eoghan Cormican for the Irish Examiner newspaper

The Pat Ryan era, as expected, is off to a winning start.

Where Kerry had opened their 2022 season with a shock – and historic – Munster League victory over Tipperary, Stephen Molumphy’s charges were unable to repeat the trick in their first competitive bow of 2023.

The home side never led beyond the third minute. Behind by 12 at the break, not even two second half Podge Boyle goals could make the tiniest inroad on that deficit.

The ease at which Boyle twice found the net was among the few red marks on the Cork copybook as they pulled out of Tralee and made for home. His first was a long-range free that sailed all the way to the net, while the full-forward found himself inside the cover and in acres of space for his second on 49 minutes.

As Cork selector Fergal Condon remarked afterwards, you simply have to defend better in both instances.

Even in this routine victory, the two green flags offered a January reminder, especially to the panel’s younger members, that there can be no momentary switching off at this level.

Competing to overshadow Cork’s season-opening win were the injuries sustained by Shane Kingston and debutant Ben Cunningham. As alluded to elsewhere on this page, Kingston pulled up early in the second period, while debutant Cunningham wasn’t two minutes introduced when he walked back out to the sideline. The hope is that neither injury will prove in any way serious.

Cork’s opening win of 2023 had been secured by the time referee Alan Tierney sounded his interval whistle. At 1-16 to 0-7 in front, the visitors were not for catching. And even though Kerry would enjoy the backing of a strongish breeze upon the change of ends, they’d have needed a gale of red alert proportions to bridge the 12-point half-time gap.

It was actually the home side who were first off the mark in that opening half, Shane Conway splitting the posts 11 seconds in. They’d not score again from play, though, for another 18 minutes. By that midway mark of the half, the Kingdom were five in arrears, and counting. Only Fionan MacKessy for the hosts was making a nuisance of himself.

The Cork goal arrived four minutes later. Debutant Ethan Twomey supplied the ball in from midfield and fouled was Declan Dalton. The latter promptly dusted himself down and dispatched the resulting penalty.

Alan Cadogan and another debutant Cormac Beausang both threw over three from play in the opening half, with Conor Lehane clipping one less.

Top-scoring was Kingston, the corner-forward firing over five frees and one from play. He looked to be in for a certain goal in the play following his fourth converted free on 16 minutes. But producing a fine save was goalkeeper John B O’Halloran.

O’Halloran was beaten for a second time five minutes into the second half by substitute Shane Barrett. The Blarney forward, introduced for the injured Kingston, finished with 1-3.

While Cork’s application and workrate lacked for nothing, Ryan’s charges know they face a far sterner January examination when All-Ireland champions Limerick travel to Páirc Uí Rinn on Sunday week.

Between now and then, Cork have the annual Canon O’Brien Cup fixture against UCC on Tuesday of next week where some teammates from yesterday evening will be turned opponents.