No joy for Kerry as Dublin retain title 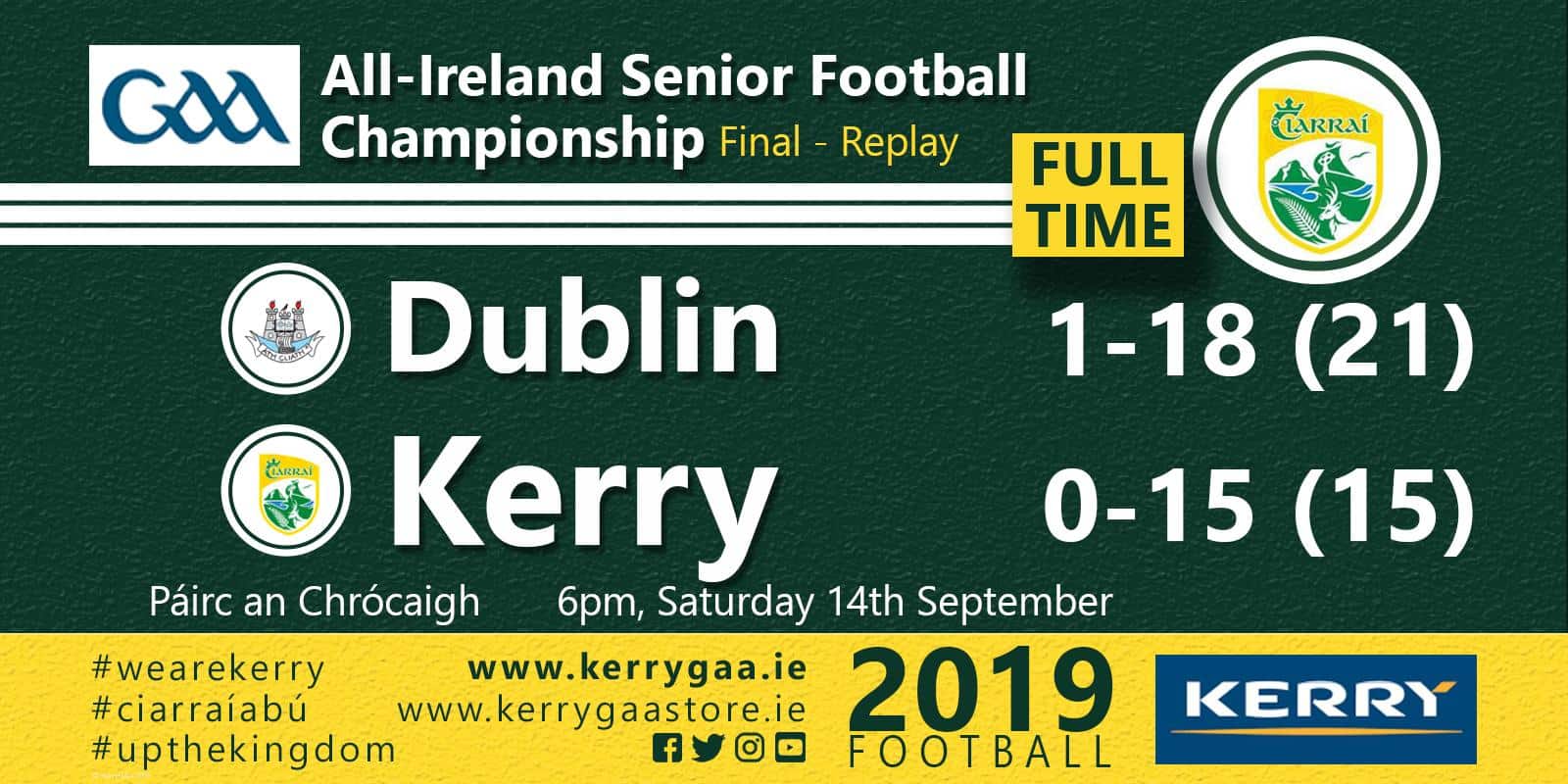 Ultimately it followed the classic replay tradition where one of the players introduced for the second instalment made the play which carried the most meaning.

Eoin Murchan’s promise and pedigree has been well documented with Na Fianna and UCD, emerging as the unlikely goalscoring hero to decide a fascinating All Ireland decider under the Saturday night Croke Park lights.

Delicately poised at the interval with the teams deadlocked at 0-10 each, Murchan’s electric run immediately after the restart culminated with a goal. In such a tight encounter it was going to be pivotal. That is how it proved to be.

Kerry were spirited until the bitter end, but Dublin refused to let the initiative slip. By this stage the flying Jack McCaffrey had been forced off injured, with Diarmuid Connolly summoned from the bench.

It was that sort of game when every contribution counted and Dublin became the first team to hoist the Sam Maguire for the fifth time in a row.

Referee Conor Lane’s final whistle at 7.40pm was greeted by a guttural roar in Drumcondra with Dublin’s place in the history books secured.

Dublin’s display was loaded with quality. From Stephen Cluxton’s accomplished goalkeeping to the relevance of James McCarthy, who revelled in a centrefield role.

Further up the field Ciaran Kilkenny, Paul Mannion, and Con O’Callaghan supplied a dozen points from play. The craft and graft was produced when the most pertinent questions were asked.

Kerry certainly examined the resolve of the standard bearers, who were dynamic and delightful initially.

Jim Gavin’s charges nailed their first five attempts to accumulate a 0-5 to 0-1 advantage by the eighth minute. O’Callaghan, Kilkenny, and Mannion rifled scores that were significant statements of intent.

At the outset Kerry went direct, but Dublin’s full back line coped adequately with the aerial bombardment, but the Kingdom were cute.

Suddenly Kerry started to move the ball through the lines with runners dashing through from deep enabling Paul Geaney and David Clifford to find small pockets of space.

That was all they needed and the gap was reduced slowly, but surely. Dublin led 0-7 to 0-3 in the 16th minute, but Kerry struck three points in a row courtesy of Adrian Spillane and two sweet Clifford efforts.

Despite being under duress at the start Kerry only trailed by one and it was compelling. It remained that way until the break as Rock edged Dublin two clear, but Sean O’Shea and Geaney replied once more.

It was a fascinating opening period with Dublin’s conversion rate of 0-10 from 13 shots and Kerry’s 0-10 from 12 confirming how slick the forward units were.

When the action recommenced, though, Kerry just couldn’t attain the same level of fluency and accuracy.

Murchan’s goal had much to do with that as Kerry were forced to chase, but Dublin’s guile and excellence frustrated the challengers.

A 45th minute O’Shea point had the margin at the minimum, but that was as close as Kerry got. Connolly’s delicious delivery located Kilkenny, who banged over a 46th minute score from play.

Mannion added two more either side of a Cluxton save from Stephen O’Brien and Kerry just couldn’t get back into the reckoning.

In the dying embers Dublin weren’t perturbed by any burden of expectancy. There was a firm and steely focus which enabled Cluxton to climb the Hogan Stand steps with the sky blue flag perched on the Gaelic Football summit again.