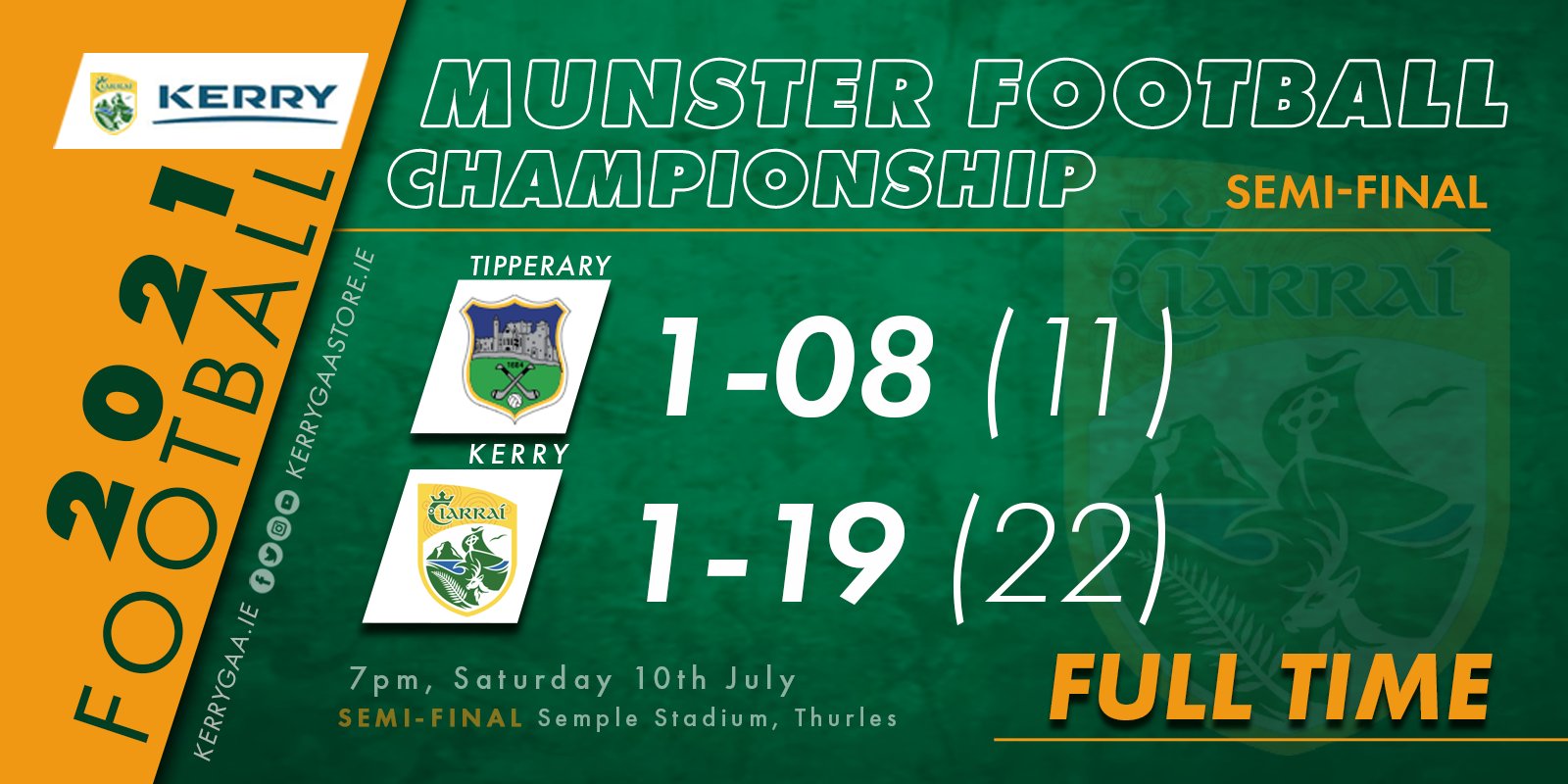 By Shane Brophy at Semple Stadium

Kerry eased into another Munster senior football final as they dethroned champions Tipperary with an efficient display in this semi-final at Semple Stadium,

The Kingdom were always in control as they dominated possession, particularly in the first half when they won nine of Tipperary’s kickouts as the home outfit couldn’t get enough possession to trouble Peter Keane’s men.

Tipperary started with 10 of the side that started in last years Munster final success with half forwards Conor Bowe and Padraic Looram making their senior championship debuts.

Sean O’Shea opened the scoring for the visitors before Conor Sweeney equalised for Tipperary who were defensive in their approach early on and it worked for a time until just after O’Shea had nudged Kerry back in front, a raid forward from Gavin White unlocked the defence and David Clifford finished brilliantly to the roof of the net. Paul Geaney and a third O’Shea free saw Kerry lead 1-4 to 0-1 at the first water-break.

Tipp improved after the resumption with Kevin Fahey and Jack Kennedy pointing from play, either side of another O’Shea free. With Kerry dominating possession, they were able to push men forward and corner forward Tom O’Sullivan added two points from play.

The home side gave themselves hope on 27 minutes when they were awarded a penalty after Jack Kennedy was fouled and Conor Sweeney slotted it away to reduce the arrears to 1-3 to 1-7.

However, with Kerry dominating the possession stakes, the goal never looked like inspiring Tipp and the visitors kicked the final four points of the half from O’Shea (3) and Diarmuid O’Connor for a 1-11 to 1-3 half time lead.

Tipp began the second half with greater urgency and sub Paudie Feehan made an immediate impact, winning a free with Jack Kennedy converted. However, Tipp were unable to record consecutive scores as Kerry kept the scoreboard ticking over through David Clifford (2 frees), Sean O’Shea 45 and a point from sub Killian Spillane.

Any faint hopes Tipp had evaporated on fifty minutes when Michael Quinlivan was sent off for an off the ball incident with Gavin Crowley. Three minutes later, Tipp were down to 13 men when Jason Lonergan was sent to the sinbin and trailed 1-15 to 1-6 at the second water-break.

The game petered out after that with Tipperary battling on gamely with Jack Kennedy kicking a further two points for the home side while Spillane, who added two further points, and a David Moran point rounded off the scoring for Kerry who emptied the bench ahead of a Munster final date with Cork, although one of those, Tadhg Morley finished the game in the sinbin.