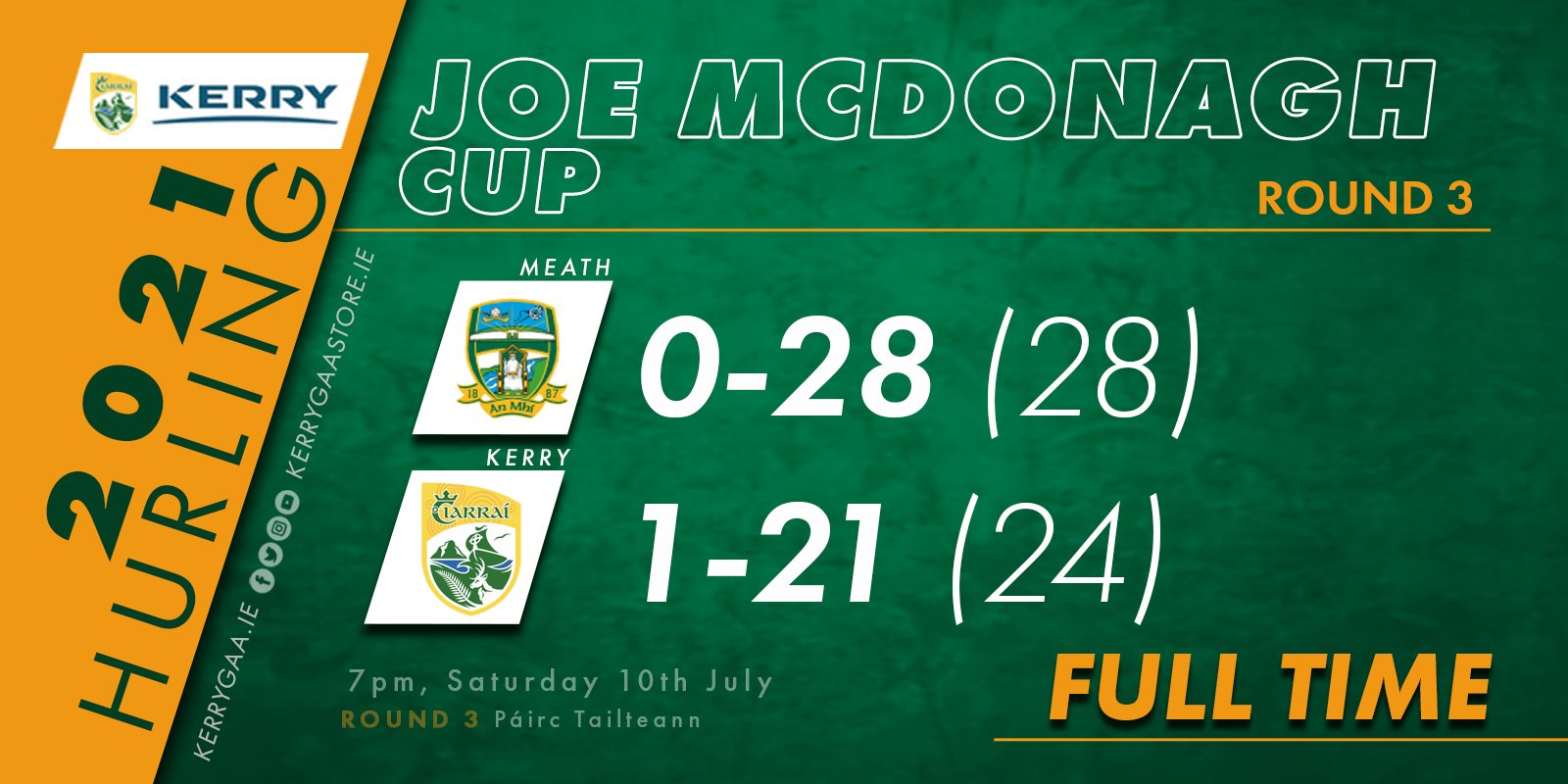 By Paul Keane at Pairc Tailteann

Padraig Boyle came to Kerry’s rescue with a point seven minutes into stoppage time at Pairc Tailteann that ultimately secured their place in next weekend’s Joe McDonagh Cup final.

All three Group B teams finished level on two points after two games so scoring difference kicked in initially to separate them, pushing Meath into third position despite their first win in the competition.

Kerry and Down were still tied on +4 scoring difference so the next method of separating the teams was required; total scores over the two games though, again, the teams were tied on 3-45 (Kerry) to 2-48 (Down).

The last method of separating the teams before a play-off then kicked in – total goals scored in the campaign, and it was on this basis that Kerry progressed to face Westmeath next Saturday.

Boyle’s point, ensuring a mere four-point defeat, made it all possible because a five-point Kerry loss would have sent Down through to the decider instead.

Despite the defeat, a much improved Meath will hope to carry the momentum on into next weekend’s McDonagh Cup relegation play-off with Kildare.

This was their best performance of the season with Jack Regan scoring 0-11 for Nick Weir’s side and Patrick Conneely weighing in with 0-6 from play.

The teams were level 11 times but a strong Meath finish, outscoring Kerry by 0-10 to 0-3 from the 56th minute, sealed the win for the hosts.

Meath struggled in the league, recording just one win from five in Division 2A and lost their opening Joe McDonagh Cup game to Down by eight points.

Yet they still retained an outside chance of not just retaining their status in the competition but of finishing in top spot if they won by a big margin.

A draw would have been enough to secure outright top spot for Kerry and, for a while, it looked like it might pan out as a stalemate with the sides level eight times up to the 27th minute at 0-10 apiece.

Shane Conway accounted for seven of Kerry’s scores in that period, all of them coming from placed balls as Meath were consistently punished for foul play.

Cian Hussey’s goal eight minutes before the break put daylight between the teams for the first time, the corner-forward stroking home off the deck after Shane Nolan’s clever lay-off.

Hussey’s goal was all that separated the teams at half-time with Kerry, who beat Meath by a goal when the sides met in the league in May, leading 1-13 to 0-13.

Meath upped the ante considerably in the second-half and reeled off five points in a row in the third quarter to take the lead, 0-18 to 1-14.

Kerry rallied again with four points in a row from Conway, Mikey Boyle, Maurice O’Connor and Bryan Murphy but were heavily outscored from there on as Meath rallied.

The Royals lost James Toher to a 76th minute dismissal following his second booking and there was more drama still to come as Padraig Boyle sent over that crucial score for Kerry at the death from a long-range free.