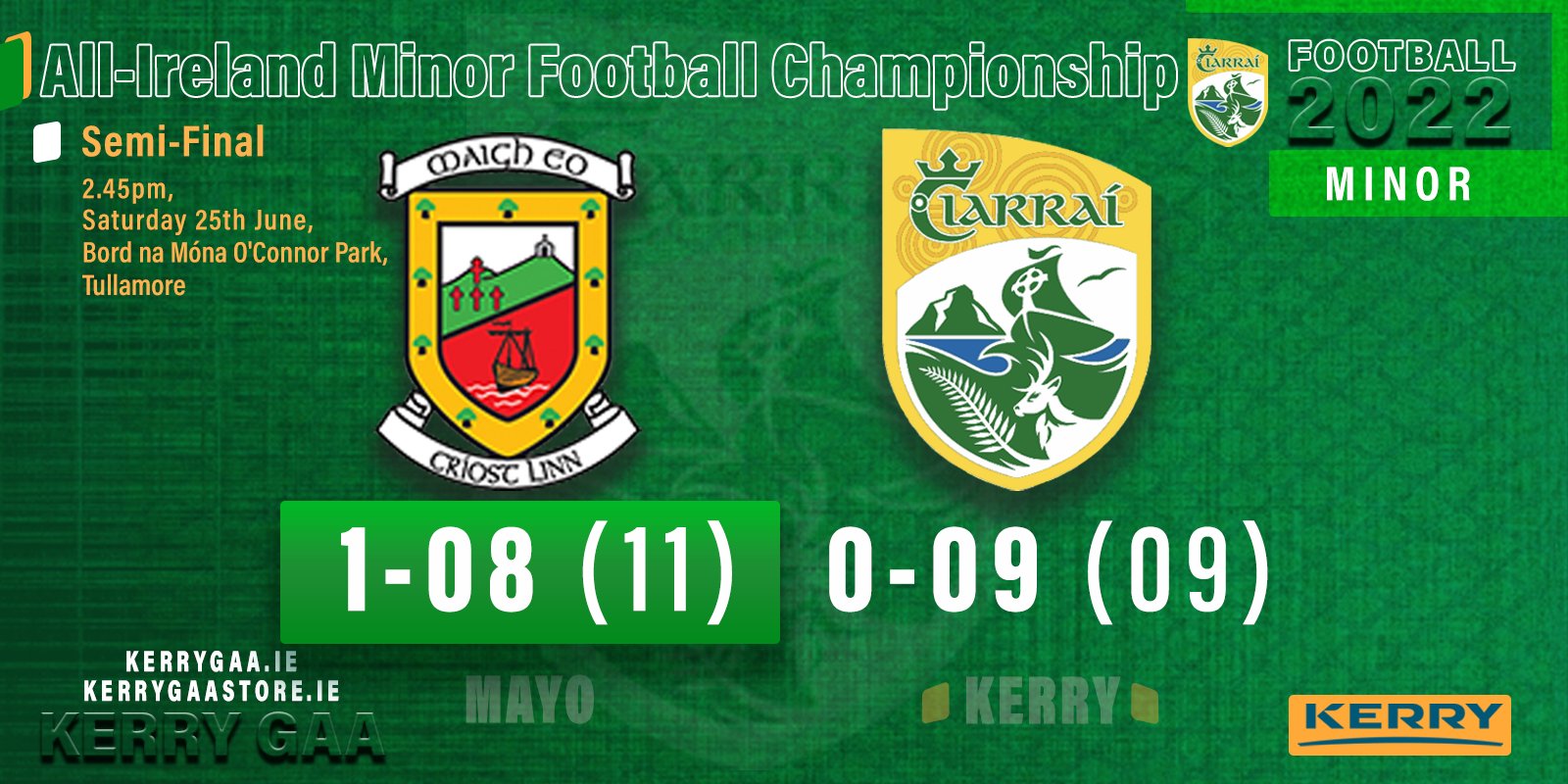 Mayo and Galway are set to clash for a third time this year in the Electric Ireland All-Ireland minor football championship, and this time it will be for the biggest prize of all, the Tom Markham Cup.

Galway held off a late Derry surge at Parnell Park earlier this afternoon and there was plenty of tension in the closing minutes of the contest in Tullamore too, as Kerry chased a goal while Mayo tried to tag on insurance points at the end, only to be undone by a complete failure of their shooting.

In the end it didn’t matter as Seán Deane’s side held on for the win, meaning that they will need to beat Galway for a third time to win their first All-Ireland minor title in nine years.

This afternoon’s game was slow to get started, with a free from Cathal Keaveney the only score before Darragh O’Connor came forward from the half-back line to split the posts with an excellent outside of the boot point in the seventh minute.

Kerry monopolised possession but struggled to make it count on the scoreboard, and while they kicked the next two points of the game, they paid a price for their profligacy when Ronan Clarke fielded a free kick from Diarmui Duffy that was dropping short, and then through a combination of great footwork and sheer power, drove in and fired the ball low past Shay O’Meara.

The response from the Kingdom was exemplary, as Odhrán Ferris levelled the game with a majestic point from the right wing, Cormac Dillon put them in front with a point that could have been a goal but for an excellent David Dolan save, then the dancing feet of Paddy Lane made it 0-6 to 1-1.

In a game with two big turning points, the first was about to take place. As Mayo tried to run the ball out of their half-back line, a body-check from Donagh O’Sullivan saw the Kerry attacked black-carded, and Mayo were quick to use the extra space and make hay. Four points on the spin before half-time completely turned the game on its head, and they made it five through a Ronan Clarke free before O’Sullivan returned to the field.

Now for turning point number two, a remarkable save from David Dolan. Paddy Lane’s trickery was again on show as he spun out from two tackles to put himself clean through on goal, and it looked as if the Austin Stacks player had picked out the top corner with his shot. Dolan’s positioning was perfect however and he deflected the ball onto the post and gathered it at the second attempt, drawing a huge roar from the Mayo supporters in the stand.

Substitute Darragh O’Connor – as distinct from the Kenmare player of the same name who started the game and opened the scoring – fired over the next point from close range, but there was a spring in Mayo’s step now, as players like Luke Feeney, Diarmuid Duffy and Dara Hurley grew increasingly influential in the middle third. However while Keaveney and Clarke added points, they also registered some very poor wides, allowing Kerry to stay in the game.

Donagh O’Sullivan cut the gap to three and Lane added another from a late free, but anything less than a green flag was unlikely to be enough at this stage of the contest, and while Colm Browne had a chance from a narrow angle to be his county’s hero, he too found David Dolan too hard to beat, and one more excellent stop from the Balla custodian saw his team over the line.