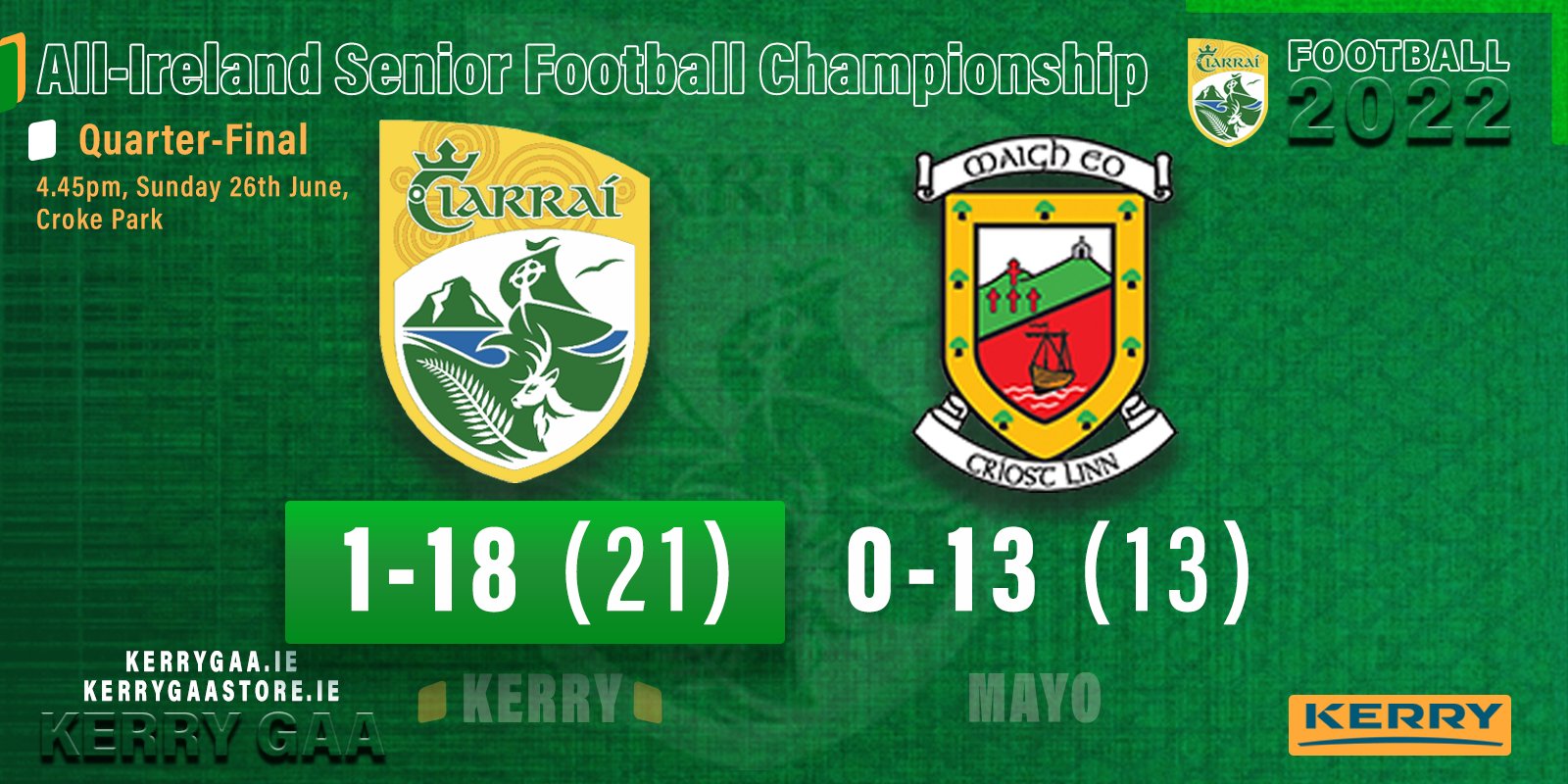 A second-half surge by Kerry was enough to see them ease their way to what was ultimately a convincing enough win over Mayo in today’s All-Ireland SFC quarter-final at Croke Park.

The Connacht side battled gamely for the first 45 minutes of the match by which time they were only one point behind. But it was all Kerry from there to the finish as they out-scored their opponents by eight points to one.

In the final reckoning Mayo simply didn’t have the same cutting edge in attack that a much more clincial Kerry did. They kicked 12 wides and only converted 10 of 27 scoring chances from play. At this level, you just can’t afford to be that wasteful.

Cillian O’Connor scored the first point of the match in the very first minute from a free after Aidan O’Shea was fouled and David Clifford responded for Kerry shortly afterwards.

Gavin White then landed a fine point for Kerry before Conor Loftus immediately replied for Mayo, but after that fast start the game slowed down.

A slippy sod and greasy ball made the playing conditions challenging, with both sets of players struggling to get a grip on the game quite literally.

Kerry supporters were given cause to worry when David Clifford pulled up after jarring his right ankle, and though he soldiered on it looked like it continued to cause him bother.

He was being marked very well too by Oisin Mullin, and with Lee Keegan also dominating his duel with Paudie Clifford the Mayo defence looked very solid.

Aidan O’Shea edged the Connacht side ahead with a fine point from long distance, but their one-point lead should have been wiped out when Kerry created a glorious goal-chance.

Stephen O’Brien popped a perfectly timed pass to Paul Geaney who raced through on goal and had only Rob Henelly to beat, but screwed his shot badly wide.

Kerry did draw level three minutes later though when corner-back Tom O’Sullivan shot over from a very narrow angle after an enterprising run forward. Those bursts from the jet-heeled Dingle man would become a feature of the game, and he finished with a very impressive haul of three points from play.

It looked like Kerry were building some momentum when David Clifford landed a free and Sean O’Shea scored a nice point from play after a clever dummy, but Mayo gritted their teeth and fought back to level thanks to a Cillian O’Connor point from play and a Hennelly free.

Mayo moved 0-7 to 0-6 ahead thanks to points from Jack Carney and Stephen Coen, but then Kerry landed the first really heavy blow of the contest when David Clifford goaled on 28 minutes.

Once again it was O’Brien with the clever pass to set him free, and the Fossa man finished with typical style as side-footed his shot to the roof of the net.

Mayo were dealt another blow when Aidan O’Shea was black-carded for taking down David Clifford off the ball, but they remained as defiant as ever and finished the first half on a high with points from Cillian O’Connor and Kevin McLoughlin to close the gap to the minimum by the break, with Kerry leading 1-7 to 0-9.

The first ten minutes of the second-half followed a similar pattern of punch and counter-punch with Mayo responding on the score-board every time Kerry increased their lead.

During this period Mayo let themselves down with some poor shooting and they were made pay for that profligacy when Kerry suddenly started to turn the screw.

Four points in quick succession from Moran, O’Sullivan, Geaney, and lively substitute Killian Spillane pushed them 1-14 to 0-12 ahead by the 58th minute and in a position of control.

With that buffer on the score-board, they were content to defend in numbers whenever Mayo had possession and hit them on the counter.

Mayo struggled to play their way through the condensed Kerry half of the pitch and quickly ran out of ideas as they shot rashly from distance with increasing frequency.

Kerry then finished with a flourish by scoring three points to just one in response from Mayo to run out convincing victors in the end.