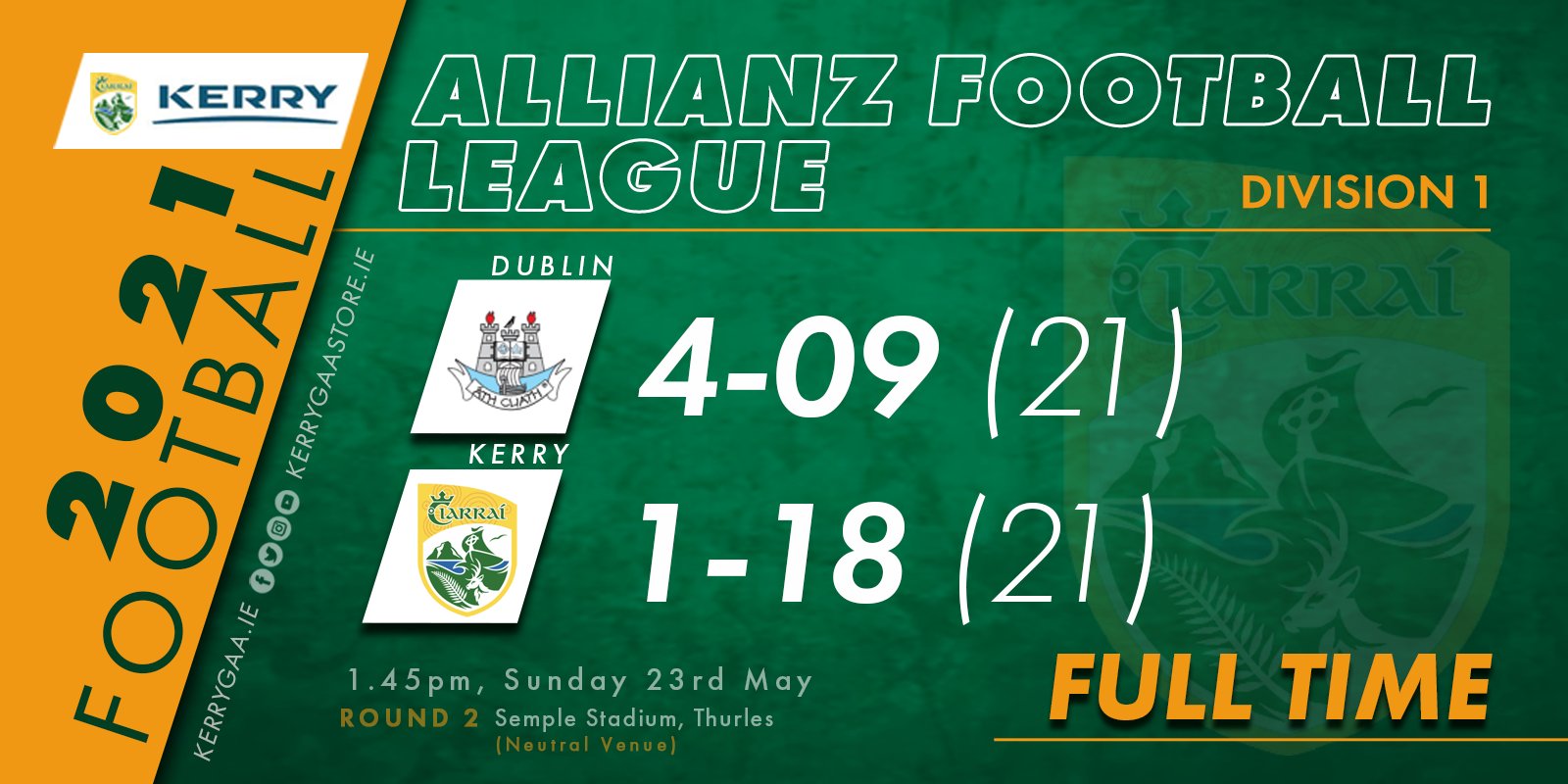 By John Harrington at Semple Stadium

No shortage of bones to pick from this tasty test between two teams who fought for every morsel before settling on taking a leg of the chicken each.

Both were left with plenty of food for thought from a meaty contest, but you get the feeling Kerry will take most nourishment from the final result.

Trailing by seven points at half-time and by three four minutes into injury-time, David Clifford’s late penalty earned them a share of the spoils that was a just reward for the character and class they showed in the second-half.

It would have been difficult to conceive of a scenario whereby you could concede four goals against this Dublin team and still avoid defeat, and the grit Kerry showed to fight back in the second half should stand to them going forward.

Of course, the concession of those goals will be a major concern, not least because it suggests the last line of their team remains the weakest.

That will always feel like an Achilles heel every time you come up against a Dublin team boasting inside forwards like Con O’Callaghan and Ciarán Kilkenny.

O’Callaghan very nearly beat Kerry on his own, scoring two goals, creating a third, winning a penalty for a fourth, and missing two other goal-chances he might have converted on another day.

Dublin won’t be pleased with the way their focus seemed to drift at times over the course of this contest, but this match will also have reinforced their belief that they can do a number on this Kerry defence whenever they really want to.

They displayed an ability to cut through the Kingdom with strong running and perfectly weighted passing as early as the second minute when Niall Scully raced through and fisted the ball across the face of the Kerry goal to the supporting O’Callaghan.

The Cuala man had to stretch to reach it but still nearly found the finish as his fisted effort came back off the upright.

That early warning aside, Kerry would actually have been pleased enough with how they settled into the game as they dominated possession in the first quarter and kept the Dublin defence under fairly sustained pressure.

Some of their shooting was quite poor, but they were still 0-4 to 0-1 ahead by the 14th minute when David Clifford scored his first from play and well worth the advantage.

But you can’t afford to switch off for even a second against this Dublin team and Kerry were caught napping two minutes later when Ciaran Kilkenny found O’Callaghan with a beautifully timed hand-pass.

O’Callaghan had stolen half a yard on Tadhg Morley which was all he needed as he raced around Kieran Fitzibbon and thumped the ball to the net.

Kerry’s response was impressive as Paudie Clifford and Diarmuid O’Connor kicked two nice points to put their team two points up again, but after the water-break it was all Dublin.

Brian Fenton and James McCarthy really thundered into the game in the middle third and provided a platform that the Dublin attack took full advantage of.

Their second goal was quite similar to the first as they cut Kerry open on their left flank and worked the ball towards goal along the end-line.

This time O’Callaghan hand-passed to Cormac Costello rather than shoot himself and the Whitehall man finished with aplomb.

This goal seemed to rattle Kerry mentally and they began to cough up possession more cheaply than they had heretofore.

Dublin took fully advantage with points from the increasingly lively Paddy Small, Costello, and Fenton, before O’Callaghan very nearly had another goal but Fitzgibbon stood strong to thwart him from close range.

Kerry rallied towards the end of the half as the teams traded points with the ball flowing from one end of the pitch to the other, but then Dublin landed another haymaker just before the break when they struck for a third goal.

Once again, it was poor defending by Kerry as Paul Murphy was outmuscled under a dropping ball by O’Callaghan who finished ruthlessly after a nice shimmy that wrong-footed Fitzgibbon.

Trailing by 3-7 to 0-9 at half-time, this was now a real gut-check for a young Kerry team, and they showed they were made of the right stuff with a powerful third quarter display that saw them outscore Dublin by six points to one.

Diarmuid O’Connor and Sean O’Shea began to drive them forward from the middle third of the field, and that provided the spark for Clifford to really catch fire.

He scored three typically classy points in as many minutes, the third of which came from a turnover forced by O’Connor that typified the sort of grit and graft Kerry were now playing with.

Kerry pushed on again after the second-half water-break with two more points from O’Shea and Paul Murphy to level the scores, and at that stage Peter Keane’s team looked the more likely winners considering the wind they had in their sails.

They were left deflated again though with the concession of another cheap goal.

Dara Mullin’s shot for a point looked like it was drifting left and wide but O’Callaghan did brilliantly to keep it in play and then as he cut towards goal he won a penalty when was clotheslined by O’Connor.

Up stepped Costello to smash the ball to the roof of the net from the resulting kick to push Dublin three points ahead again.

For the final ten minutes of normal time and the first four minutes of extra-time Dublin’s game-management was excellent as they dominated possession for long stretches and looked like they would see the game out safely.

But then Kerry pulled the game out of the fire deep in injury when Tommy Walsh palmed a long delivery from Ronan Buckley down into the path of Stephen O’Brien who was hauled down by Philly McMahon as he cut in towards goal to take a shot.

Clifford stroked the penalty home with typical panache, and Kerry had something to show for their considerable efforts.

There were plusses and minuses for both teams after a topsy-turvy match, but Kerry will be slightly happier with their sum total from the day.