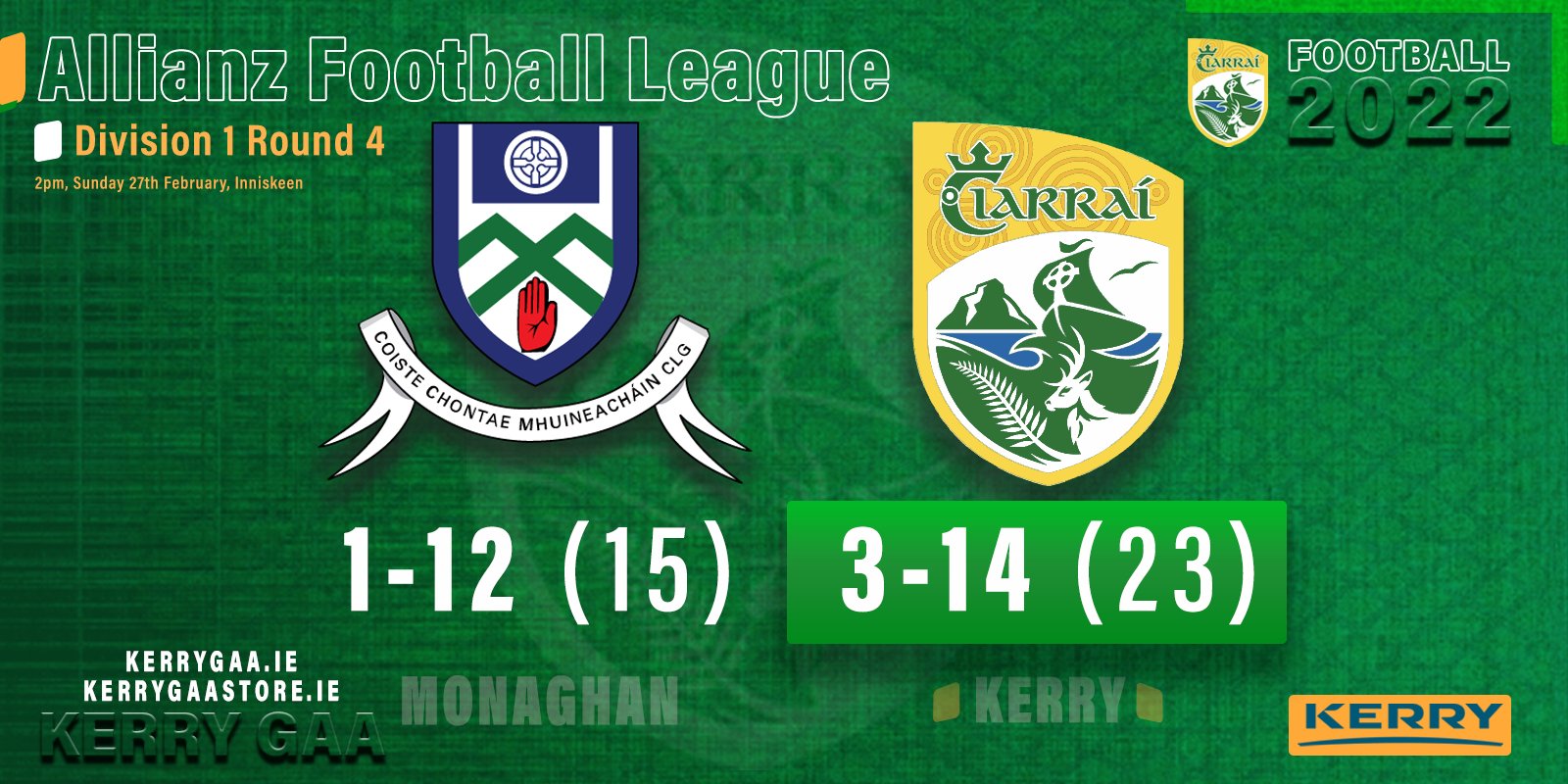 By Colm Shalvey at Inniskeen

Kerry boosted their position at the top of the Allianz FL Division One with a dominant win over Monaghan in Inniskeen.

Monaghan failed to put wind advantage to good use in the first half and they were made to pay, as a ruthless Kerry side who hit just three wides in total stretched their unbeaten league run to 12 games. Kerry were able to pick off a couple of goals on the counter-attack in the second half, as star forwards David Clifford and Seán O’Shea racked up a combined total of 3-5.

Monaghan started brightly with points from Kieran Hughes and Kieran Duffy, but despite having the breeze at their backs, they were outscored by 0-7 to 0-2 in the remainder of the first half. Kerry took 12 minutes to get off the mark through the industrious Paudie Clifford, but they soon found their range, with Gavin Crowley and David Clifford adding fine scores against the elements. Conor McManus and Dessie Ward kept Monaghan narrowly ahead after 24 minutes, but Kerry hit the last four points of the half courtesy of Seán O’Shea and one each from their lethal full-forward line of Tony Brosnan and the Clifford brothers.

Kerry led by 0-7 to 0-4 at half-time and they made it double scores within seconds of the restart via Diarmuid O’Connor, who helped the visitors set the tone at midfield along with Jack Barry. Any hopes the home side had of a revival were wiped out within a few manic minutes, as David Clifford hit a brace of goals, the second of those coming after Monaghan had coughed up possession with Rory Beggan caught adrift up the pitch.

From then on, it was simply a matter of how much Kerry would win by, with Brosnan and David Clifford adding to their tally. McManus, Mícheál Bannigan and Andrew Woods responded for Monaghan, but they coughed up another cheap goal when Seán O’Shea lobbed home the visitors’ third major. Kerry subs Stephen O’Brien and Paul Geaney added their names to the scoresheet and although Monaghan finished with a flurry of consolation scores, including a McManus penalty, it was academic at that stage.