A win for Kerry in Inniskeen! 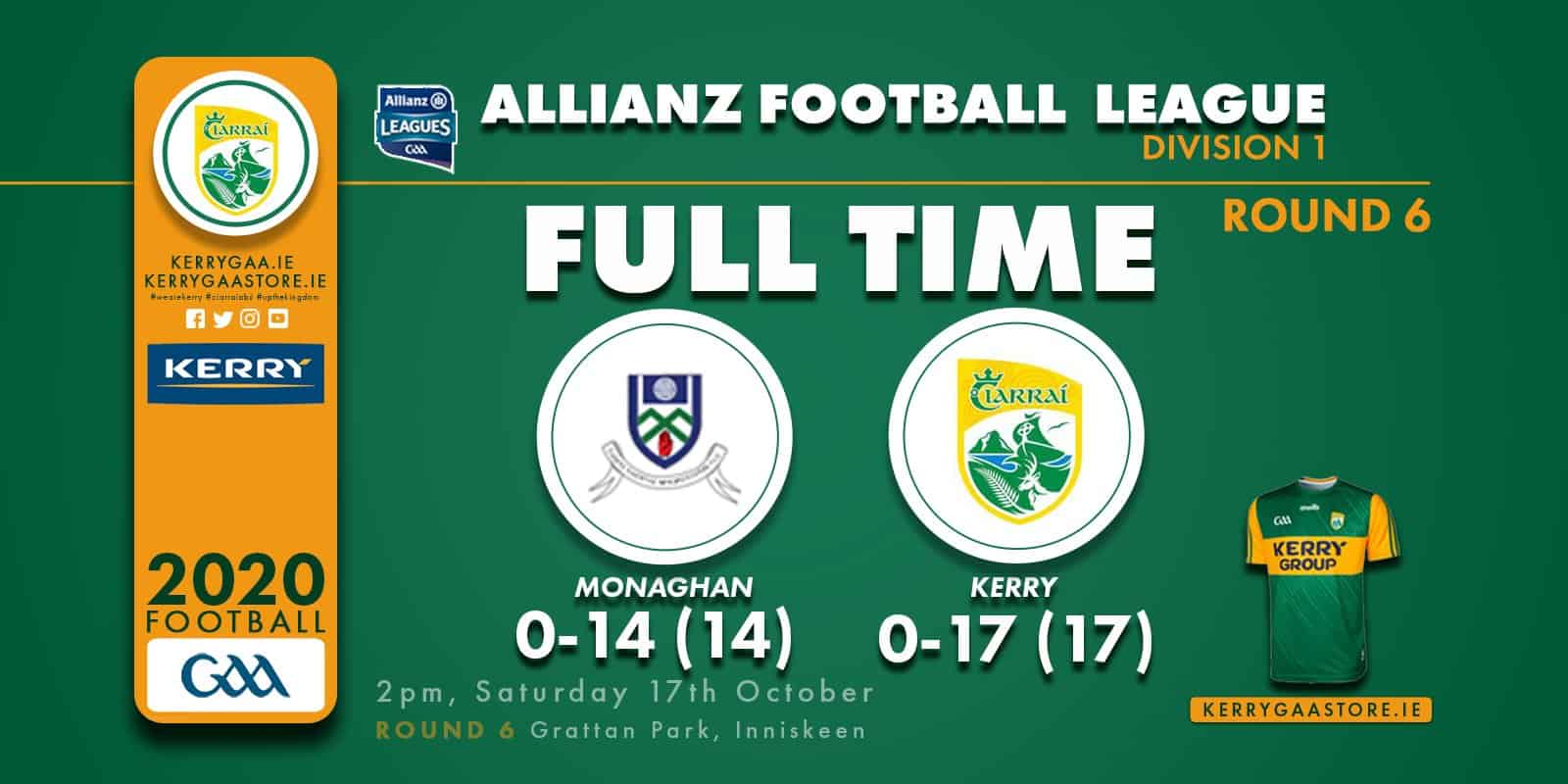 After a seven-month lay-off and a much talked about trip north, Kerry resumed their Allianz Football League campaign with a win that was more comfortable than the scoreline might suggest.

Despite the players taking their own cars on the 500-mile round trip, they went about their business with a real sense of purpose from the start in Inniskeen scoring the opening three points, two from David Clifford.

Kerry led from start to finish and always had a three or four point buffer which Monaghan could not close.

The home side sprang Conor McManus from the bench at half time and he ended up as their top-scorer with 0-5. Another sub, Christopher McGuinness, scored twice, but it wasn’t enough against a strong Kerry side that had nine different scorers in an open game that lacked a bit of intensity at times.

There were loads of positives for Kerry, however.

Tony Brosnan, with a superb club season with Dr Crokes behind him, marked his return to inter-county football with 0-3 from play having fully recovered from a punctured lung sustained during the club campaign.

Ronan Buckley was another to be given a chance and while he didn’t score showed a nice array of passes and one superb 40-yard kick pass straight into Clifford’s chest for a mark, was a sign of things to come.

The defence was well organised and comfortably dealt with anything Monaghan could throw at them, though Tadhg Morley may have been glad McManus only played for the second half.

Monaghan defeated Kerry when the teams last played in Inniskeen two years ago but with no form guide to go on after seven months with no activity, they were slightly cautious to begin with.

Local boy Andrew Woods got their first score after 12 minutes on his home pitch and it sparked a good spell for Monaghan, who outscored Kerry by four points to two in the next 12 minutes.

Dessie Ward squeezed a raking point through a lot of traffic, Fintan Kelly converted a mark and Micheal Bannigan landed a free to narrow the deficit to 0-5 to 0-4.

In that time Kerry kept their noses in front through Diarmuid O’Connor and Sean O’Shea’s excellent ‘45’.

Kerry’s four points in a row before half time was a sure sign they were in no mood to let Monaghan back into the game and tireless running from the support runners led to points by Jason Foley, Paul Murphy and a fisted effort by Gavin White, giving the visitors a 0-10 to 0-6 lead at half time.

McManus and McGuinness tried to keep Monaghan competitive but Kerry had too much quality. Whether it was a booming long-range score from David Moran or Sean O’Shea taking responsibility with a classy point, they had too many options and had quality to bring on.

Defending league champions Kerry are expected to host Donegal in Tralee next weekend while Monaghan have a chance to maintain their Division One status with a home game against Meath.