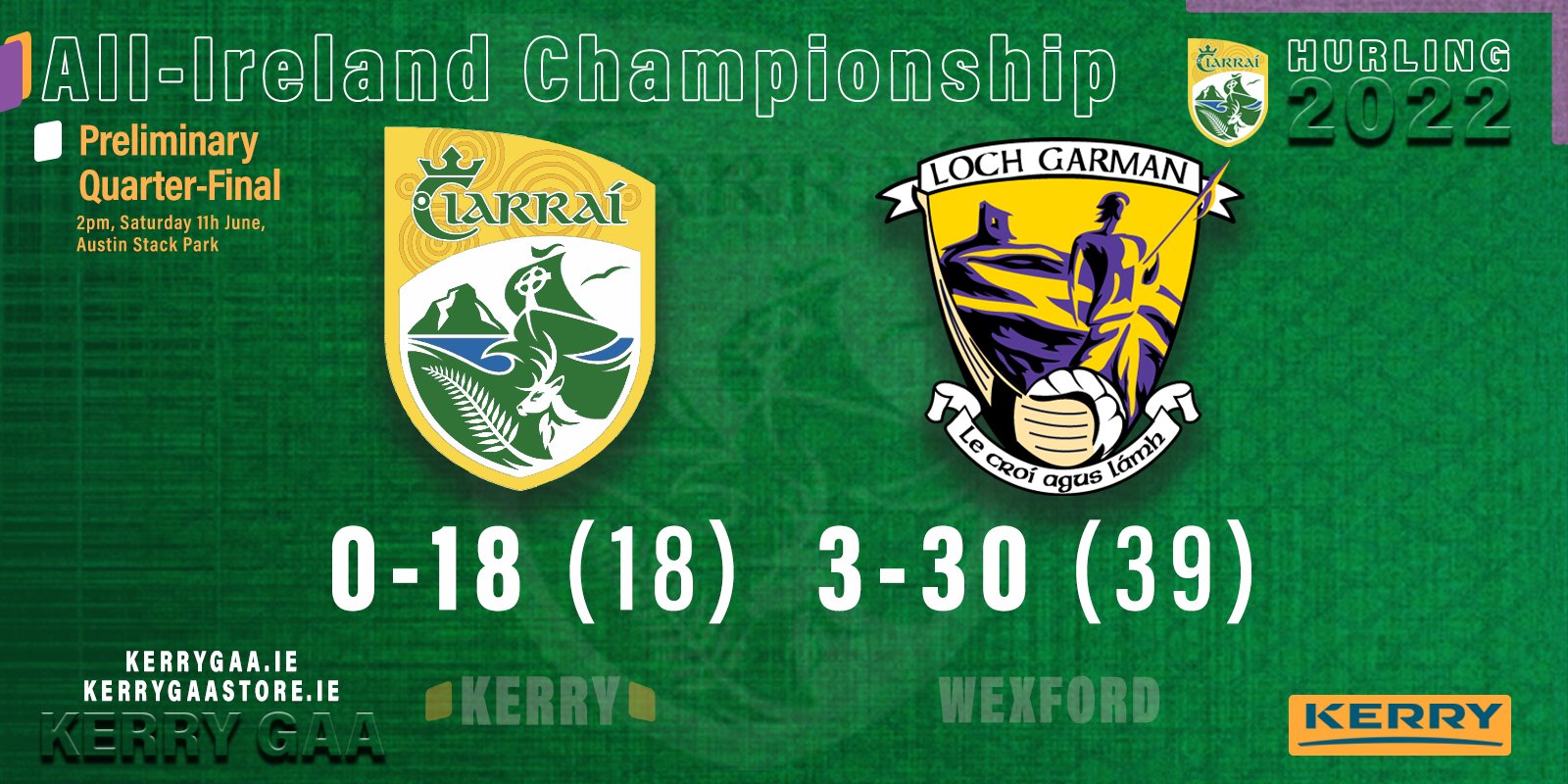 After their heroics in last week’s Joe McDonagh Cup final, the Kerry hurlers found the step up in class against Wexford in this All-Ireland SHC preliminary quarter-final a bridge too far as they succumbed to the Slaneysiders by 21 points in Tralee.

The win – a very comfortable one by the finish – books a quarter-final proper against Clare next weekend for Darragh Egan’s team, which saw them fire in three second half goals to kill off a Kerry team that hurled courageously but tired in the second half.

The visitors were already on their way to being one of the last six left in the Liam MacCarthy Cup when they led 0-24 to 0-13 at the three-quarter mark, but goals from Conor McDonald, Rory O’Connor and Conor Hearne put a Wexford gloss on the scoreline that was possibly a little unfair on Kerry.

After shipping five goals to Antrim in last week’s McDonagh Cup final – three in the first half alone – it says much for the tenacity of the Kerry defence on this occasion that McDonald’s fizzing goal in the 54th minute was their first meaningful strike at Louis Dee’s goal.

That score put the visitors 1-24 to 0-13 ahead, and it was in that third quarter that they put this game well beyond the Kingdom, who clearly and understandably tired after their Croke Park exertions last week.

The first half started ominously for Kerry with Wexford putting up the first five scores of the game – all inside the first 10 minutes – with four from Lee Chin, playing inside at full forward.

The best Kerry could muster in that period was a wide from Podge Boyle, and the early sense was that Kerry could take a real beating here before the last of the 2,700 attendance.

This Kerry team is nothing if not gutsy, though, and they settled into to enjoy their best period of the game over the next 10 minutes. The Kingdom’s first score came from a Podge Boyle free after 13 minutes, and though Chin hit back immediately with his second score from play, there was a composure and intent to Kerry’s play now, with their defence particularly tigerish against the Leinster men.

Excellent scores from Sean Weir and nominal full back Eoin Ross – either side of a Rory O’Connor score – made it 0-7 to 0-3 by the 16th minute, before Boyle arrowed over three frees in as many minutes to make it 0-7 to 0-6 to Wexford after 20 minutes.

It was heroic stuff from Kerry, but it was also as close as they would get to the Leinster men, who won the next 20 minutes by nine points to two.

Chin punished a defensive over-carry with a tap over free, full back Liam Ryan came forward for an impressive score, and Wexford began to open their shoulders with more confidence and faster hurling.

Though he hadn’t been particularly impressive, Kerry were dealt a big setback when Shane Conway had to leave injured on the half-hour mark, and even though Fionán Mackessy arrested the scoring rot for Kerry with a stand-out score, Wexford took an ever so slightly flattering 0-16 to 0-8 lead to the interval.

The third quarter started with points from Rory O’Connor and Chin (2). Kerry hit back with four points in the next 10 minutes – the pick of them a sideline cut from Eoin Ross – but Wexford were winding up for a big finish.

The first goal duly arrived via McDonald before O’Connor’s 64th minute major made it 2-27 to 0-15 and Hearne tapped in a couple of minutes later, against the 14 men of Kerry who had Micheal Leane sent off late for what seemed a late strike.