Victory for Kerry in the AFL, Division 1 Semi-Final 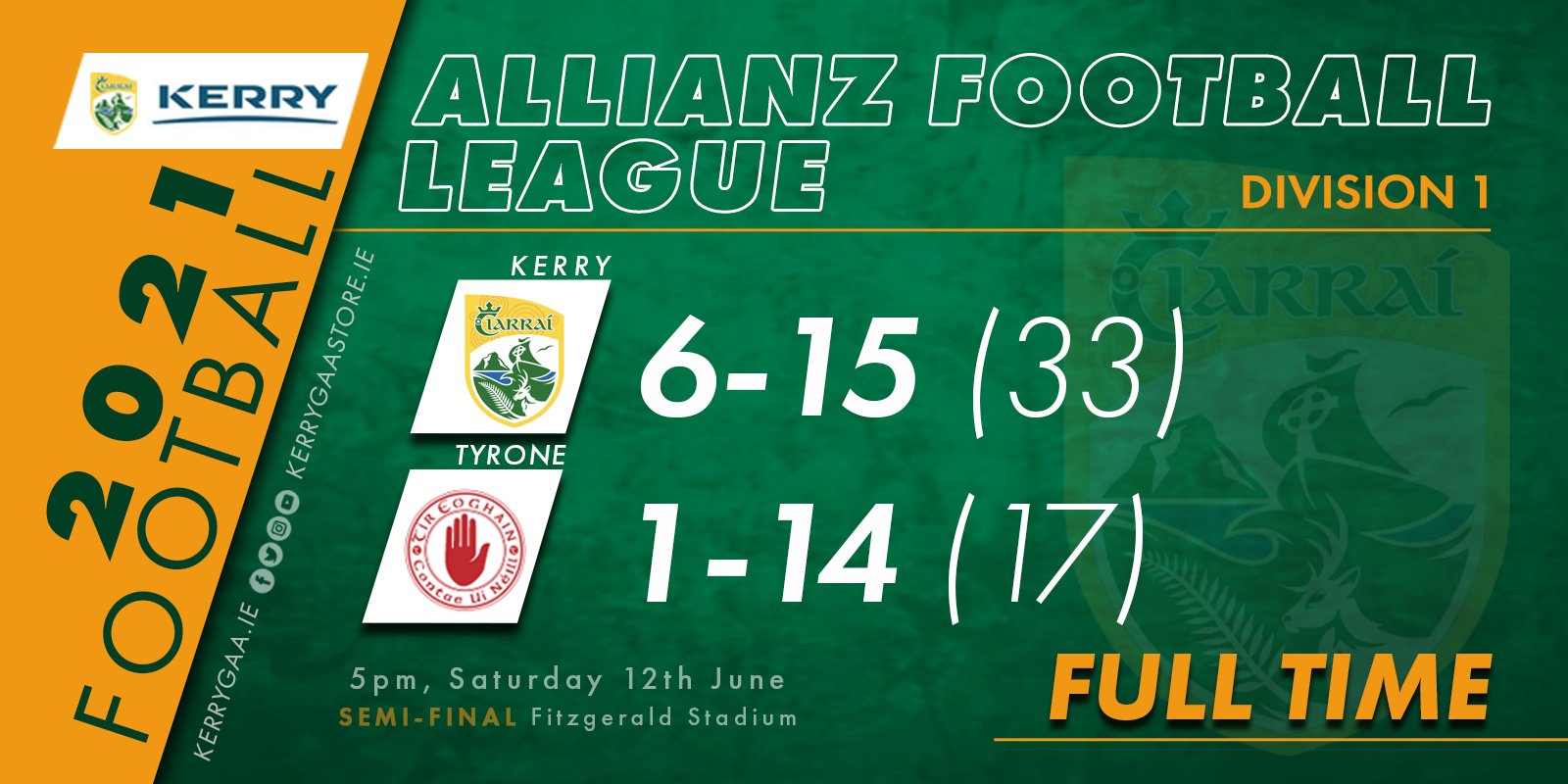 Kerry delivered a purposeful performance to cruise to victory in Killarney.

Tyrone certainly offered no other defence in a game that saw Kerry take them for six goals, and they could easily have raided six more had they really wanted to.

It was just the five goals in the first half that laid the platform for Kerry’s win – including an audacious lobbed goal from 40 metres by Gavin White who punished Niall Morgan for his poor restarts and roaming ways.

White’s goal was the second of a quick-fire brace in 15th and 16th minutes as the Kingdom led 3-1 to 0-3 at the water break; a period when Tyrone needed smelling salts more than hydrating fluids.

A minute after White’s brilliant thinking, Sean O’Shea, David Clifford and Dara Moynihan combined beautifully for the latter to walk the ball past Morgan, to go alongside Clifford’s fifth minute goal from the penalty spot after he was pushed while shooting for goal.

All Tyrone had to show for that first quarter was a serious ankle injury to Darragh Canavan who had to be stretchered off the field after a six-minute delay.

Tyrone really didn’t seem to know what they were trying to do in the game; at times going very lateral, other times pumping long balls in towards Conor McKenna and Paul Donaghy to no great effect, and on a few occasions they were forced into shooting from distance. The end result was they mined six points from play for their efforts including two apiece from Kieran McGeary and Darren McCurry – but overall the Kerry defence was very much in control.

The second quarter saw Kerry continue in total control, with Sean O’Shea showing super vision and dexterity to set up Paul Geaney for Kerry’s fourth goal after 30 minutes, and the latter was in again in the 37th minute to drive ball – and almost Morgan as well – to the net to help Kerry to a 5-6 to 0-7 half time lead.

The second half hardly raised a cheer from the 200 family and friends permitted inside to watch, such was the pedestrian nature of Tyrone and the utter dominant control by Kerry.

Tiernan McCann filched a Tyrone goal in the 42nd minute as Kerry led 5-11 to 1-8 at the second water break.

Killian Spillane and Micheal Burns came off the Kerry bench to score a brace of points each, and Jack Barry cleaned up a breaking ball to sweep Kerry’s sixth goal to an empty Tyrone goal.

Kerry return to the same venue for a Munster Championship clash against Clare in a fortnight. Tyrone must gird themselves for reigning champions Cavan in the Ulster Championship.