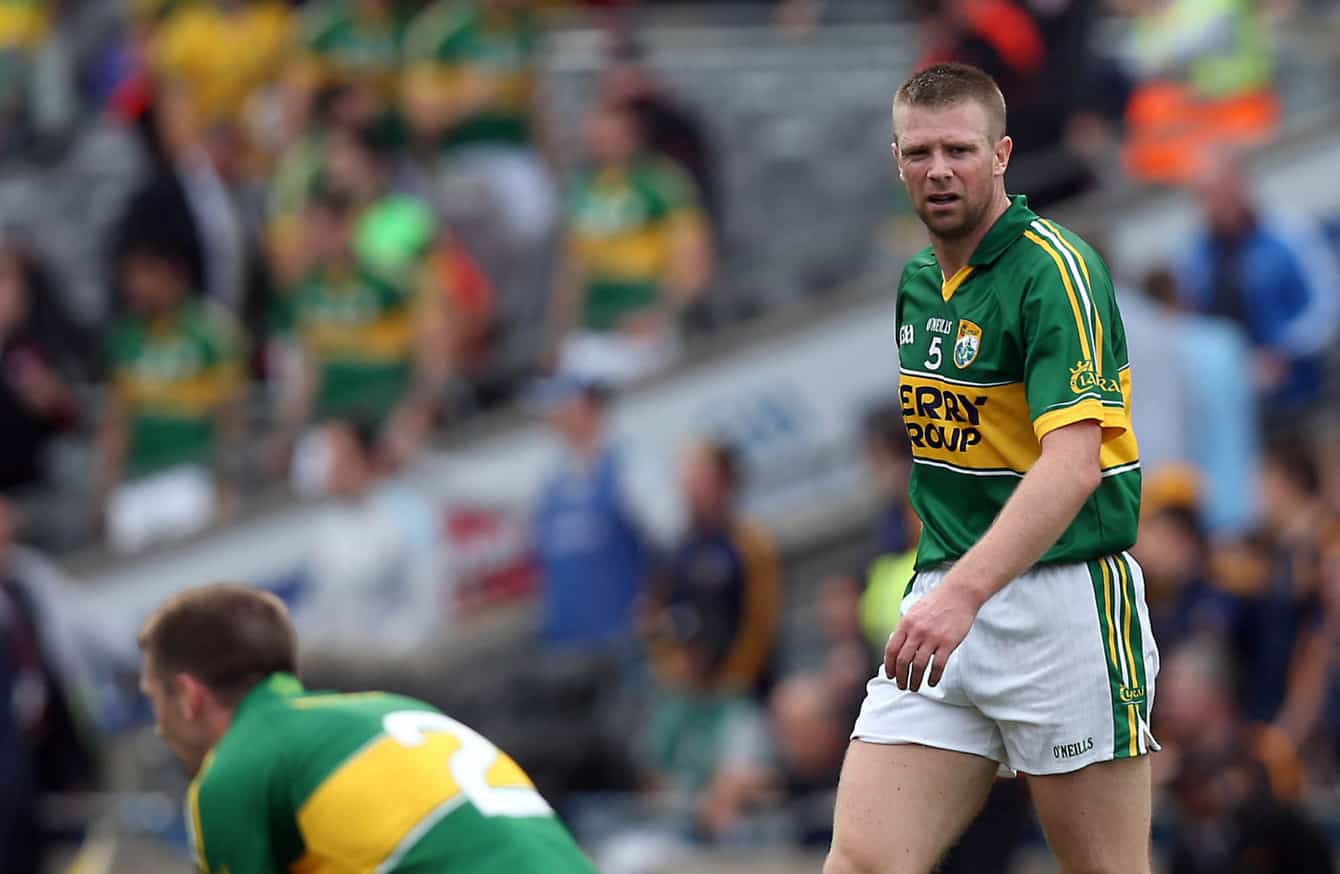 Kerry defender, Tomás Ó Sé has announced his retirement from intercounty football after a career in his beloved Green and Gold Jersey that stretches all the way back to 1995.

The 35 years old An Ghaeltacht clubman bows out of the limelight at the end of an honours laden career that saw him win 5 All Ireland Senior Football medals, a similar number of All Star Awards and the Texaco Footballer of the Year award following his last All Ireland Medal in 2009.

Under the management of his Uncle, Paidí­, Tomás made his senior Championship debut in the full back line against Cork in 1998 alongside Barry OâShea and Stephen Stack, and went on to play 88 Championship games for his native Kerry scoring an amazing 3-35 in the process. He won his first All Ireland medal in 2000 an occasion he still regards as his most memorable sporting moment.

The Ventry native has certainly chosen to bow out at the top having given stellar performances during the 2013 Championship, particularly his defiant displays against both Cork in the Munster Final and Dublin in the All Ireland Semi Final.

Tomás Ó Sé was a firm favourite with the Kerry supporters, endearing himself to them with his swashbuckling style of play in the number 5 geansaí­, his defiant attacking forays into âenemy territoryâ and his general no nonsense determined approach. His 5 All Ireland Medals were won in the company of his brother, Darragh while younger brother Marc was on board for four of those Celtic Crosses.

To say that Tomás Ó Sé will be a huge loss to the Kerry Senior Football team is an understatement. The Number 5 jersey, which he made his own for so many years, will be very difficult to fill. He is the longest serving inter county player, and not alone that, his honours in the game are a proud record of commitment to Kerry. Growing up in Ãrd aâ Bhothair, TomÃ¡s along with Feargal, Darragh and Marc, was submerged in the football tradition and with their uncle Páidí as their mentor we should not have been surprised that the Ó Sé family would continue to have a strong influence on the Kerry teams and go on to be long serving inter county players who would achieve the highest honours that an inter county playing career can offer.

His Kerry career started at minor grade where he excelled. It was not long before he established himself in the senior and Under 21 teams. Few people realise that Tomás was on the extended panel in 1997 when Kerry won the All-Ireland Final ending the long wait from 1986.

I thank Tomás for all the joy and entertainment he gave us down through his years as a player. We will miss those bursts of speed out of defence and needless to say, many of his opposing inter county forwards will be relieved that they donât have him to worry about any longer! He has retired from the inter county scene in the full knowledge of the vast contribution he made to Kerry GAA and Kerry people throughout the world will be sad today when they hear of his retirement. He has given us great memories and we wish him well in everything he does in the future.

On reading through the list of his achievements listed below, we realise the extent of his unquestioned ability, character and talent as player. What is not listed here is the extent of the leadership he gave on the field. There are no medals to honour leadership, but the leadership that Tomás has given to his fellow team members on numerous occasions down through the years will be impossible to replace. We wish him, and his family, the very best in the future.

On behalf of the players and management I would like to congratulate Tomás Ó Sé on his retirement. He had a fantastic honour laden career. In many ways Tomás epitomised everything that Kerry football is all about. His commitment, determination and never say die attitude were plainly visible every time he took to the pitch. He was a warrior. He also had a game changing ability and instinctively knew when one of his trademark bursts from defence culminating in a score was required. His fitness levels have always been astounding. He trained ferociously hard and really enjoyed the challenge of getting himself ready for the big championship days. These were the days that he enjoyed most. The days that defined him. The days when he always performed.

From a personal point of view he was a great team mate and a dream to manage. He was a huge presence in our dressing room. In team meetings he always spoke well. He consistently had something new and relevant to contribute. He was an outstanding example to our younger players this season. He has passed the baton on to them and clearly displayed the characteristics and standards required by a Kerry footballer. He showed them the Kerry way.

Tomás was the best wing back that I have seen play the game.

Championship Scores in Total since Debut: 3-35

Texaco Footballer of the Year 2009