No Joy for Kerry Hurlers as Antrim win Div.2A 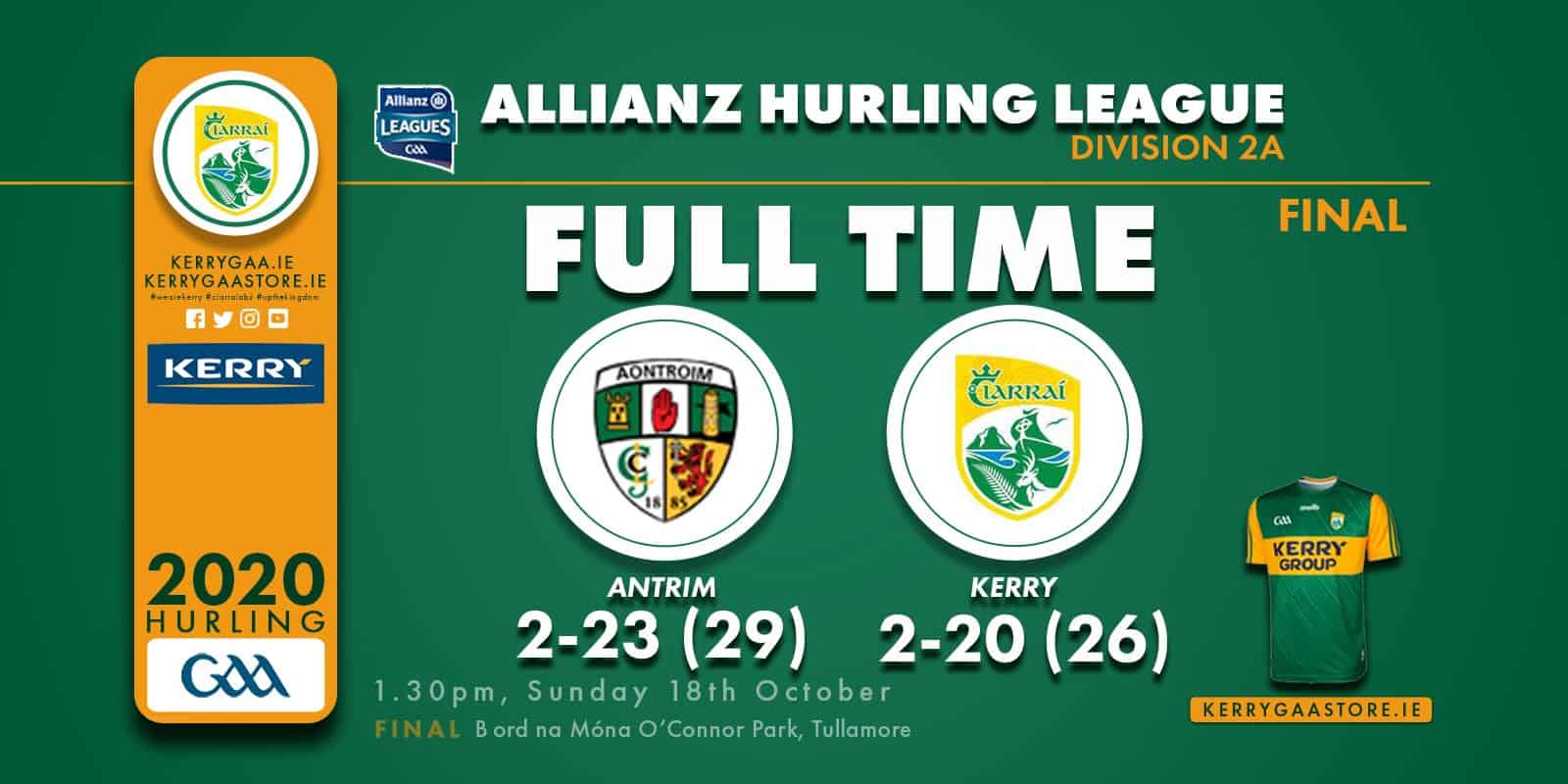 Antrim earned the Allianz Hurling League Division 2A title and promotion as they withstood the challenge of Kerry in an engrossing game at Bord na Móna O’Connor Park.

Darren Gleeson’s side deserved their victory, but were pushed hard by the Kingdom and Shane Conway in particular, with Kerry’s talisman top-scoring with an impressive 1-14.

However, Antrim had the better spread of scorers overall and were always able to find a reply when it appeared the Munster men were coming back into contention with some fine performances from Gerard Walsh, Joe Maskey and Paddy Burke in the half-back line helping deliver good ball down into a dangerous forward unit.

They were dealt a blow early, however, with Neil McManus forced off injured after just four minutes and it took them a little while to settle, but they gradually got into their stride and opened the scoring through the excellent Conal Cunning.

Shane Conway took little time to get into this game and he hit the first four Kerry scores, but Antrim had a better spread with Joe Maskey, James McNaughton and Niall McKenna adding to another pair for Cunning as Antrim took a 0-6 to 0-4 lead at the water break.

The sides went score-for-score with Paddy Burke and Cunning replying to Mikey Boyle and Conway efforts, but Kerry were beginning to get on top around the middle third and this saw them get out in front with Michael Leane bouncing off a challenge to bring them to within one and then on 23 minutes, as long Conway free broke to Mikey Boyle who whipped to the net.

After an exchange of points, Antrim replied with their own goal on 27 minutes as Domhnall Nugent got onto a long Joe Maskey delivery and popped inside for Conor McCann to collect, dart inside and find the net to put thew Saffrons one ahead.

Kerry struggle to find their range early in the second period with a trio. of wides, while Antrim were much more clinical and were close to a goal seconds in when Nugent pulled overhead with the ball coming off the base of the post, but the ball was recycled with Michael Bradley pointing.

Scores from McNaughton (two), McKenna and Cunning followed with Shane Conway getting Kerry off the mark in the second period with a free eight minutes in.

Antrim were five clear on 57 minutes before Kerry roared back in as a Conway free inside his own half dripped and deceived Ryan Elliott who couldn’t prevent it hitting the net. Another Conway free followed as the gap was down to one, but just as in the first half, Antrim found a reply as Eoghan Campbell did great work to get inside and play an excellent ball across goal for James McNaughton to gather, burst through and rifle low to the net.

Antrim were five in front once more as the game moved into added time thanks to the accuracy of Cunning and McNaughton from frees, but Kerry continued to press with Conway leading the charge, hitting three of the last four points to leave as goal in it, but this was as close as they would get as Antrim held firm to claim victory and promotion back into the top flight.