Kerry victorious over Donegal in poor conditions in Killarney 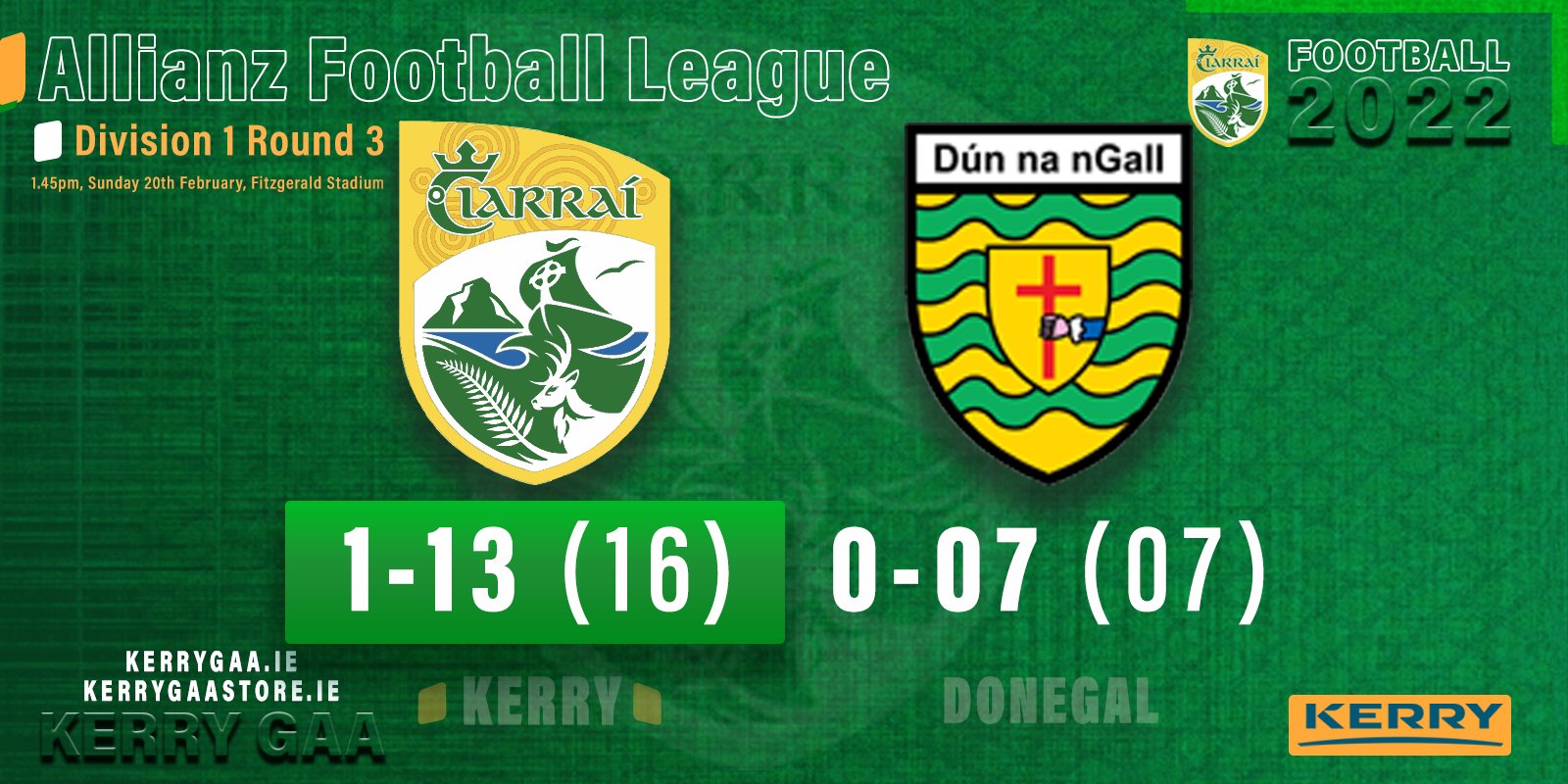 A nine-point win over Donegal at a wet and wild Fitzgerald Stadium sees Kerry move to the top of Division One after three rounds, sitting above Armagh and Mayo on scoring difference with all three teams having taken five points.

Winning the first half by seven points backed by a very strong gale would have been expected from Kerry, but winning the second half by two points was not, and yet that’s exactly how Kerry won this drab contest by enough to take them above Armagh with a superior scoring difference.

Declan Bonner’s team might have been reasonably confident of turning over that 0-9 to 0-2 half time deficit, but they never really looked able to go after Kerry or the deficit in any meaningful way.

Indeed, Kerry made all the big plays in the second half, starting with a big statement of intent inside the first minute after the restart when the excellent Sean O’Shea saw his low shot come back off the post with Shaun Patton beaten in the Donegal goal.

Five minutes later Jack Barry’s looping shot almost beat Patton only to drift just wide, so when the inevitable Kerry goal came it was no surprise. No surprise that it came from David Clifford either, though he has scored neater ones.

Clifford was on the field just 10 minutes when he took possession, rounded Ethan O’Donnell and bore down on goal, and though he completely miscued his kick it still deceived Patton and squirmed past him to make it 1-9 to 0-3.

By the time the contest was done, Clifford had hit the crossbar with another shot as Kerry looked streets better then Donegal in every facet of the game.

The first score came from a sideline ball, which O’Shea expertly guided over in the third minute, and when Killian Spillane pointed two minutes later Kerry looked set to make the very most of the strong wind on their backs.

The early Donegal tactic seemed to be to keep it out of Kerry’s hands as much as anything. And for a five-minute spell they did just that, throwing the ball around the middle of the park, with Kerry content to fill the space behind them with plenty of bodies and cut off the channels.

Kerry’s next two points came from the excellent O’Shea, the first a confidently converted 35-metre free, and then a lovely left-footed score from the middle of the field as Kerry started to pick holes and gaps in a Donegal formation that never seemed quite sure whether to stick or twist against a strong wind.

Kerry’s willingness to press up with the advantage was illustrated with corner back Dan O’Donoghue coming forward to kick the home side into a 0-5 to 0-2 lead, before Paul Geaney added number six.

By the interval points from O’Shea (free), Paudie Clifford and Killian Spillane had Kerry leading 0-9 to 0-2, and whatever about the wind and driving rain, Donegal still had a mountain to climb.

O’Shea’s shot off the Donegal post was an early warning that Kerry wouldn’t be sitting back on their lead.

Their third point didn’t arrive until the 46th minute from Conor O’Donnell – 36 minutes after their second – and though Paddy McBrearty picked off a couple of scores in the second half there was little threat to most of what Donegal did. Indeed, after a wayward sideline ball from Jack Savage straight to Ryan McHugh in the 65th minute they butchered a great chance to raise a green flag.

Kerry closed out the game with scores from O’Shea either side of a David Clifford, with Kerry nicely set as league leaders ahead of their trip to Clones next weekend to face Monaghan.