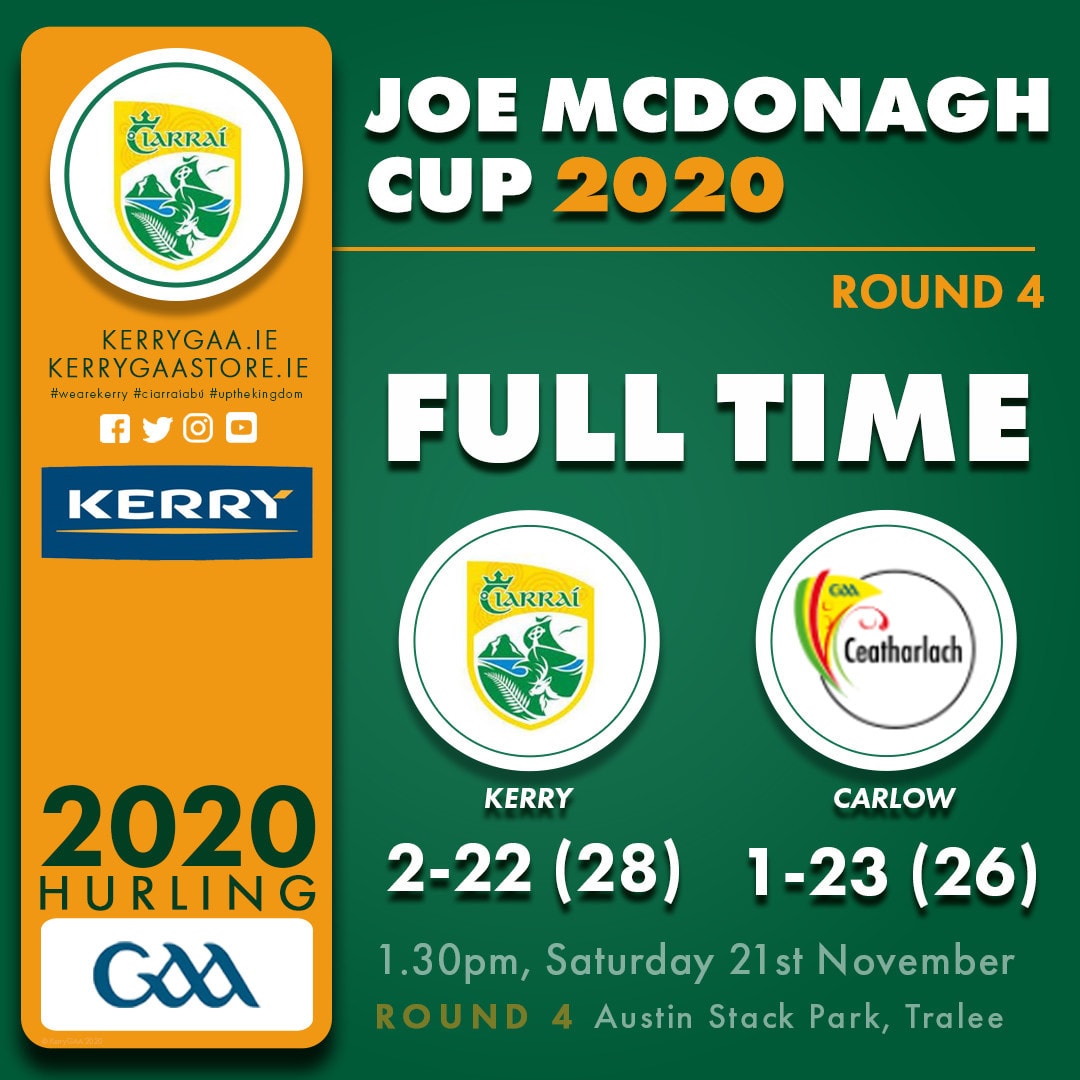 A valiant Kerry team booked their place in the Joe McDonagh Cup final after tense, but deserved, two-point win over a slightly more fancied Carlow team in Tralee.

Having led by five points at the interval, Kerry saw that lead whittled away by Carlow who then looked good for the win as they went ahead by two points heading into the last 10 minutes. But the Kingdom had a late kick in them, and two excellent points in additional time from Michael O’Leary snatched the win for the home side, who are likely to face Antrim in the final next month, which will be a curtain-raiser to the All-Ireland SHC Final on December 13.

Kerry manager Fintan O’Connor had called this Round 4 game a championship semi-final in that his team absolutely needed to win to book their place in hurling’s second-tier championship finale.

The home side had taken a five-point lead, 2-12 to 1-10, into half-time thanks to two goals from centre-forward Daniel Collins, but Carlow rallied well into the second half to close the deficit and then lead by two as the game entered the final ten minutes.

Kerry were boosted by the availability of defender Fionan Mackessy who had a red card from the previous weekend’s loss to Antrim overturned on appeal, and the home side took an early 0-4 to 0-2 lead. Then, after just six minutes, Carlow’s Jon Nolan showed great awareness and skill to slap home a goal to give the Leinster men the lead.

Kerry were hit with the loss of goalkeeper Martin Stackpoole in the 14th minute with a hand injury, and though Carlow led 1-6 to 0-6 at the water break, Kerry were back on terms just after the re-start when Mikey Boyle and Maurice O’Connor combined well to set up Collins for a 19th minute goal.

All things considered Kerry would have been pleased to take a 1-12 to 1-10 lead to the interval but with the last play of the half – in the 37th minute – Shane Nolan burst through on a solo run, and when his shot was parried by Brian Tracey, Collins was on hand to flick the ball past the Carlow ‘keeper to give Kerry that five-point lead. They needed every bit of it.

The third quarter was scrappy, with more wides than scores, as Kerry led 2-15 to 1-15 at the second water break. Carlow rallied strongly thereafter, and with Kavanagh nailing his frees and Chris Nolan and Diarmuid Byrne landing crucial scores, the visitors edged into the lead and looked like they might hang on.

A Shane Conway free and a fine score from Shane Nolan under pressure hauled Kerry back on level terms, and then O’Leary came good in the last two minutes of additional time to create the space and find the composure to point Kerry to a Croke Park final next month.