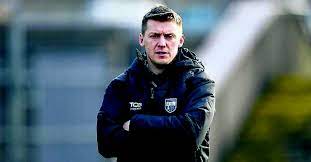 Kerry GAA are delighted to announce that we will be proposing Stephen Molumphy as the new Kerry Senior Hurling Manager for a two year period (2022/2023) to the County Committee for ratification later this month.

Comdt Stephen Molumphy is a native of Waterford and now lives in Ballyduff Upper, Co. Waterford. He joined the Defence Forces in 2002 and served in a number of different Units at home and overseas. He was Captain of the Waterford senior hurling team for 3 years, won 2 Munster championship titles and 1 National League title. He was also awarded an All-Star during his playing career. He was selector and coach with Wexford senior hurlers in 2019 (Leinster championship title) and Waterford senior hurlers in 2020 (All Ireland finalists). He was also manager of the Irish Defence Forces hurling team 2018-2019. He is married to Niamh and has three kids, Jack (7), Fionn (5) and Katie (2).

It is intended that a further Kerry based selector will be added to Stephen’s management team in the coming weeks.

We wish Stephen and his management team all the very best over the next two years.