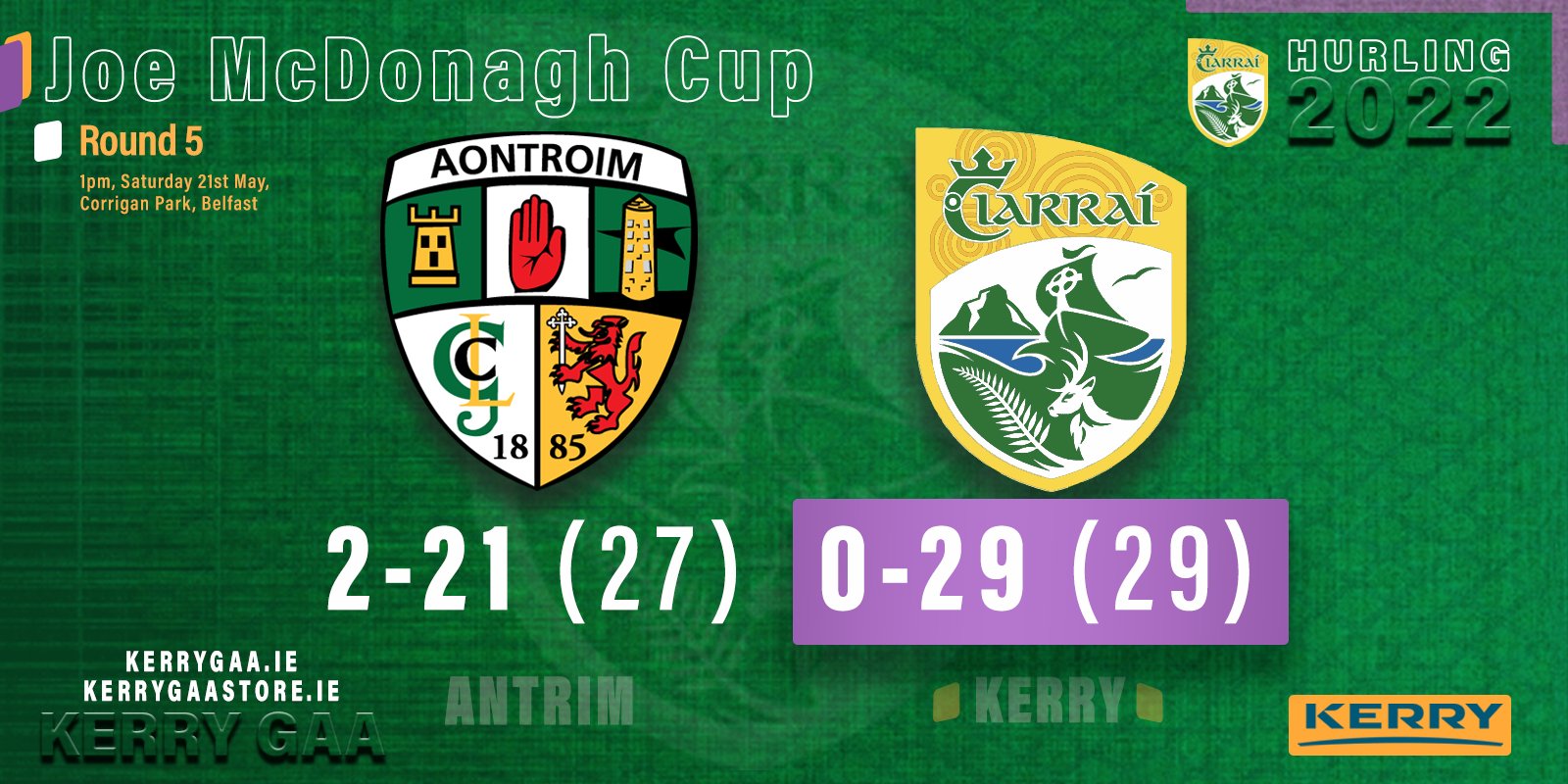 By David Mohan at Corrigan Park

On a day of high drama, Kerry scored a two-point win over Antrim in Belfast to join the Saffrons in the Joe McDonagh Cup final.

Prior to throw-in, the Kingdom knew they needed a win and a Carlow victory over Offaly to reach the decider and the stars aligned for Stephen Molomphy’s men as they did what they had to do against the already qualified Saffrons and Carlow overcame Offaly to set-up a repeat of the 2020 decider.

Podge Boyle top-scored with 15 points in a flawless display, while Eoin Ross chipped in with four and Paudie O’Connor played a captain’s part to help fend of a late Antrim rally that almost saw them take something from this game that would have broken Kerry’s hearts.

But as it was, the Kingdom manged to find the answers when their backs were to the wall to hold on and stamp their ticket for the decider.

Kerry was the side that absolutely had to win this game and with the aid of a strong wind, they began with intent, rattling off the first four points with Eoin Ross setting them on their way and Podge Boyle hitting three of his nine first half-scores.

Antrim began to awaken with James McNaughton and Eoin O’Neill registering, but Kerry remained a step ahead until the Saffrons gradually began to assert themselves with a pair of Nail McManus points sandwiching one from Michael Bradley.

Points from Aaron Bradley and Conor McCann had the sides locked at 0-7 on 22 minutes, but after an exchange of points, Kerry regained control with five of the next six points – three from Boyle with Fionan MacKessy and Ross getting in on the act.

A pair of James McNaughton frees brought Antrim to within two, but a Boyle free on the stroke of half-time left the visitors 0-14 to 0-11 to the good, although they were aggrieved play wasn’t allowed to continue for that late free as Shane Conway buried to the net although play had been brought back.

Despite playing into the wind in the second period, the Kingdom began to pull clear with Eoin Ross setting them on their way, Colum Harty getting on the sheet, Jordan Conway popping over off the bench and Ross adding to his tally.

A pair of James McNaughton points was all Antrim had to show for the third quarter as Kerry pushed the gap out to seven, but the introduction of Keelan Molloy and Daniel McKernan sparked Antri to life as they narrowed the gap to three, but Kerry managed to stay ahead with Fionan MacKessy hitting back-to-back scores.

As news filtered through that Carlow were ahead in Tullamore, Kerry looked in a good place as Boyle, Ross and Gavin Dooley pushed them into a seven-point lead, but then this game took a huge swing towards Antrim in stoppage time as Keelan Molloy fed Conal Bohill to blast home.

Jordan Conway responded with a point for Kerry, but then Neil Mcmanus found the net with a low shot in traffic that left just one between the teams.

Boyle’s 15th point of the day settled Kerry, but a point from McKernan left it a very nervy finish, yet as they did all afternoon, Kerry found an answer with Paudie O’Connor sealing their victory and place in the final with the last acto fo the game.