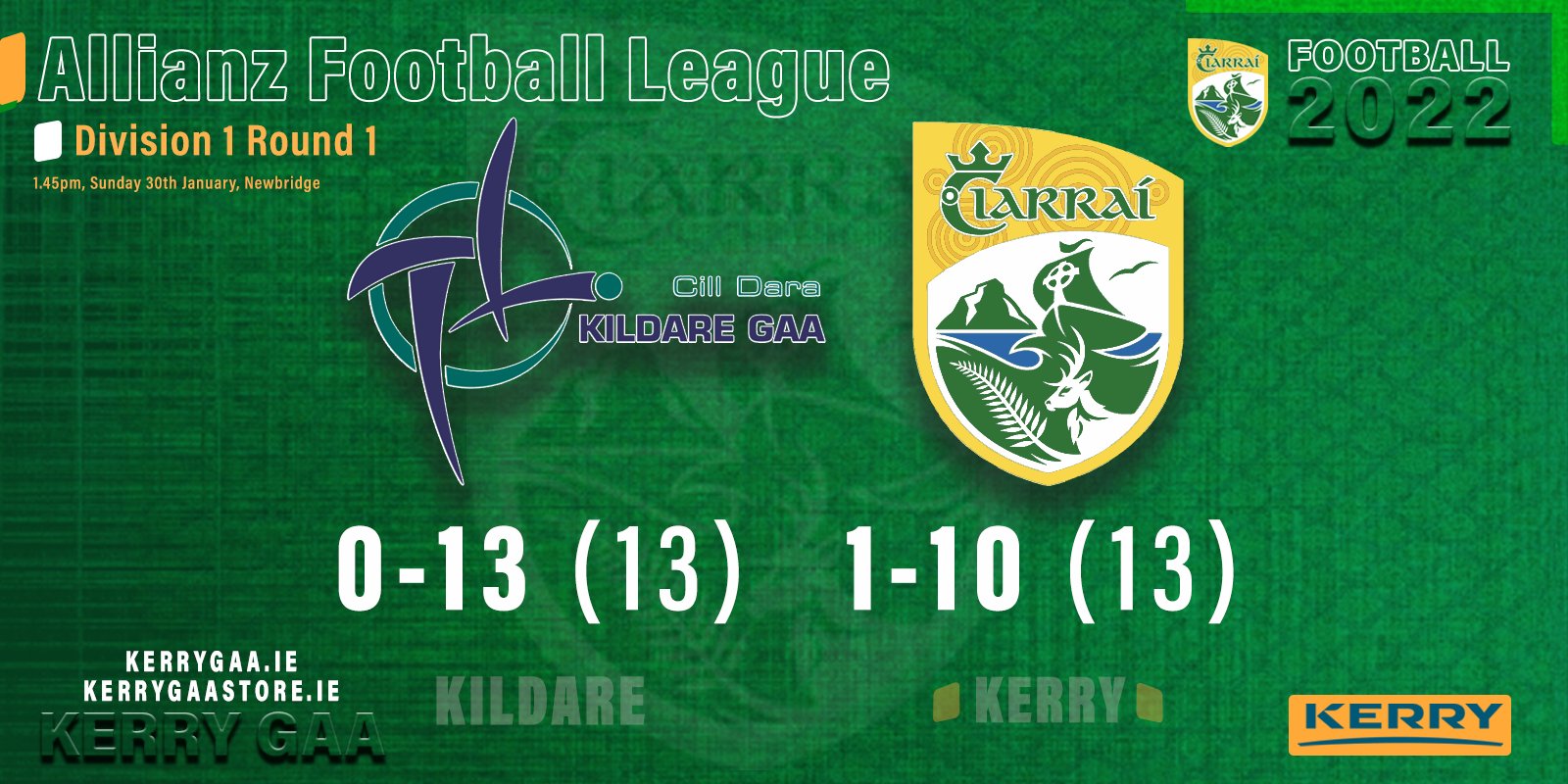 The Glenn Ryan era as Kildare manager started with a very draw as Kildare scored the last four points of the game to frustrate their former boss, Jack O’Connor.

In a magnificent rearguard action, Kildare frustrated Kerry and didn’t concede after the 58th minute, while getting the all-important scores down at the far end, a Jimmy Hyland free in the fourth minute of injury time eventually clinching the draw.

The game was delayed by 15 minutes as the crowd poured into St Conleths Park.

As well as supporting the dream management team of Ryan, Anthony Rainbow, Dermot Earley and birthday boy Johnny Doyle those Kildare fans were also hoping to get one over the man who helped them into Division 1, O’Connor, who was beginning his third term as Kerry manager.

After Kildare scored the first two points of the game, Kerry took the lead in the fifth minute when Killian Spillane scrambled home the scrappiest of goals. Although the finish was untidy, it owed much to Gavin White in the build-up and his departure in the 27th minute due to a hamstring injury badly hurt Kerry as his rampaging runs from wing back caused Kildare a lot of problems during his time on the pitch.

A spell of three points in a row helped Kerry into a 1-6 to 0-4 lead by the 20th minute but remarkably, they only scored four points in the remainder of the game. The Kildare backline were led by the outstanding man marking job done by captain Mick O’Grady on David Clifford but around him the entire backline stood firm, even though at wing back Tony Archbold was making his first Kildare start and Jack Sargent his debut.

Jimmy Hyland scored two points for Kildare to reduce the gap but Clifford’s second of the game in the 30th minute was the last score of the first half and left four points between the sides at the break, 1-7 to 0-6.

Paul Geaney extended that lead to five early in the second half but Kildare battled back with points from Paddy Woodgate, on his debut, and rampaging midfielder Kevin Flynn.

Paudie Clifford and substitute Tony Brosnan then scored either side of Paul Cribbin effort to leave four in it once again with 12 minutes of normal time to play.

But Kildare, urged on by tremendous support from the terraces, ploughed on. Woodgate clipped over two excellent scores and then Hyland left one in it in the 68th minute.

Kildare came up with the defensive block to engineer one last chance to equalise and in the 74th minute, Hyland held his nerve ton convert a free after Cribbin had been fouled to kickstart the Glenn Ryan era in style, but also to leave Jack O’Connor with plenty to ponder as he left Newbridge.