Kerry edge win over Mayo in terrible conditions in Tralee 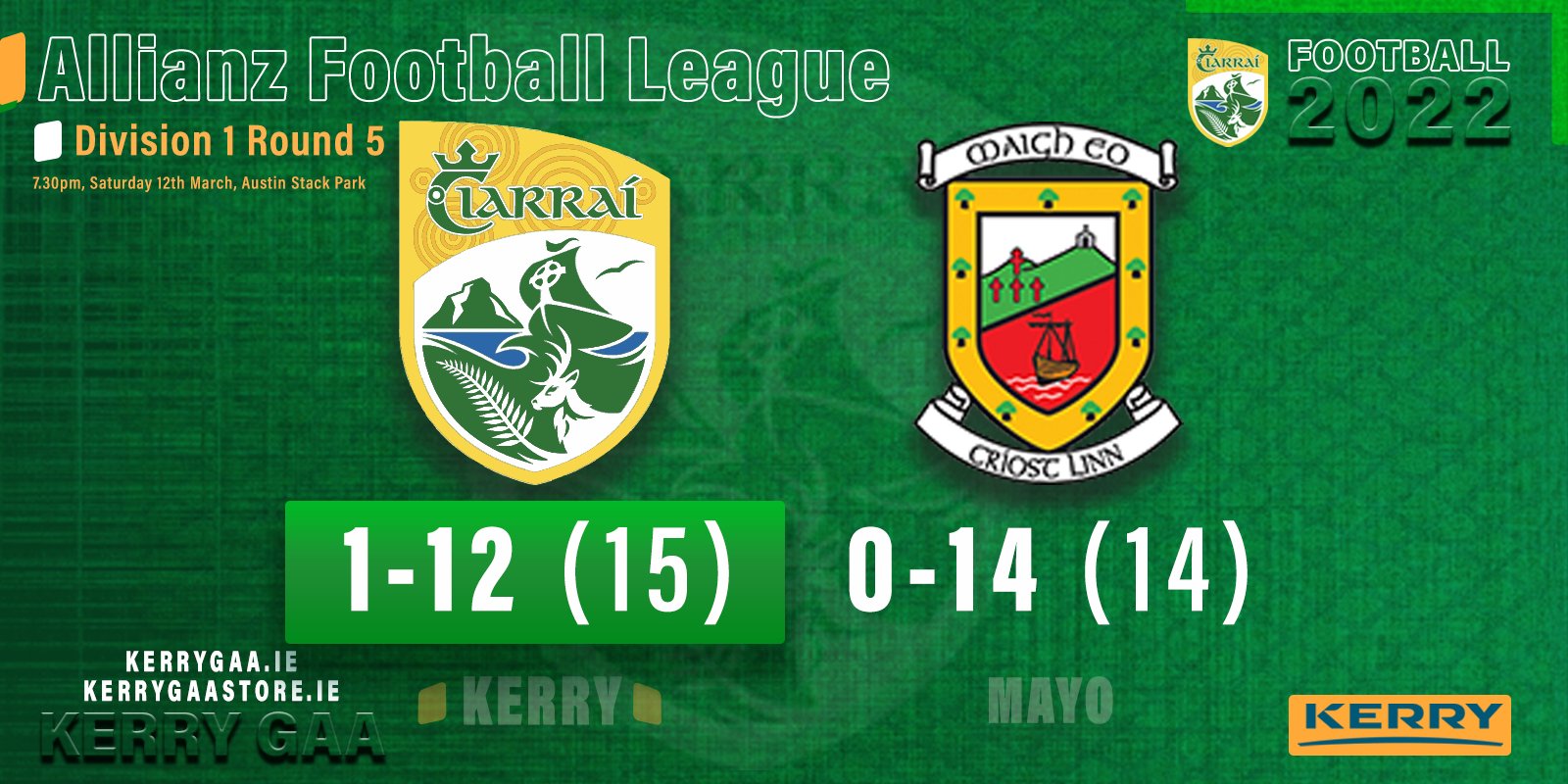 A League final appearance next month looks a distinct possibility for Kerry after they beat Mayo for the first time in a League game on Kerry soil since 2009. Jack O’Connor was Kerry manager back then, and it looks like he is set to take a Kerry team back to a League final just as he did then, 12 years ago.

Kerry made hard work of this one-point win on another wet and wild night in Tralee, but then Mayo – who came into this fixture on equal points as Kerry – were always going to ask the hardest of questions of the Kingdom.

Leading by Tony Brosnan’s goal at half time, 1-6 to 0-6, Kerry could take nothing for granted at that stage, with Mayo matching them stride for stride in the opening period, save for the goal that came in the 21st minute.

Having dragged themselves right back into the game by the 63rd minute, before falling behind to a late David Clifford free, Mayo had one last chance to rescue a draw and a valuable point but Lee Keegan’s long effort at the Kerry posts trailed narrowly wide, which just about summed up how little there was to separate the two division one leaders coming into this contest.

Mayo can take plenty of positives – as will Kerry – from another titanic battle in the Kingdom, but on a night of extremely difficult conditions James Horan’s team turned over a little too much ball, which had them chasing Kerry and the game for most of the 80 minutes played.

In a game of such tight margins Brosnan’s 21st minute goal, which thrust Kerry into a 1-4 to 0-3 lead, proved a defining score right to the dramatic end.

The Dr Crokes man – a late replacement for Paul Geaney – started and finished a move involving David Clifford and Adrian Spillane to drive the ball past Rob Hennelly in the Mayo goal.

A minute later Mayo conjured a similar movement but Aiden Orme lacked Brosnan’s composure and dragged his shot wide before David Clifford’s point put Kerry five points ahead, the widest margin between the sides in the first half.

Central to Kerry’s slight superiority in the opening period was a remarkable work-rate that saw them turn over Mayo repeatedly, with Dara Moynihan and Paudie Clifford typifying a lot of that work by Kerry.

Mayo – who scored first through a fine left-footed point from Matthew Ruane – weren’t without their opportunities either, with the best goal chance coming from Diarmuid O’Connor right at the end of the half. Played in by Ruane, the Ballintubber man found himself one on one with Shane Murphy who got a vital touch on O’Connor’s goal-bound shot to put it out for a ‘45’ which Rob Hennelly converted to make it 1-6 to 0-6 at the interval.

The second half proved every bit as competitive, and as the rain eased, the quality of the football went up.

David Clifford, who scored three points in either half, kept the Mayo defence honest, but at the other end Ryan O’Donoghue reciprocated with six converted frees and a pointed mark – five in the second half – as Mayo gamely reeled in the deficit.

It was Ruane’s second point, in the 63rd minute, that eventually drew Mayo level. Clifford converted a free in the 65th minute to make it 1-11 to 0-13, but when O’Donoghue levelled it up eight minutes later it looked like the teams were destined to share the spoils.

A careless foul by Aidan O’Shea on Stephen O’Brien handed Clifford a tap over free in the 76th minute and the best Mayo could muster was that late effort by Keegan which tailed wide, and leaves Kerry on the brink of reaching the League final while Mayo have a bit of work to do if they want a rematch in early April.