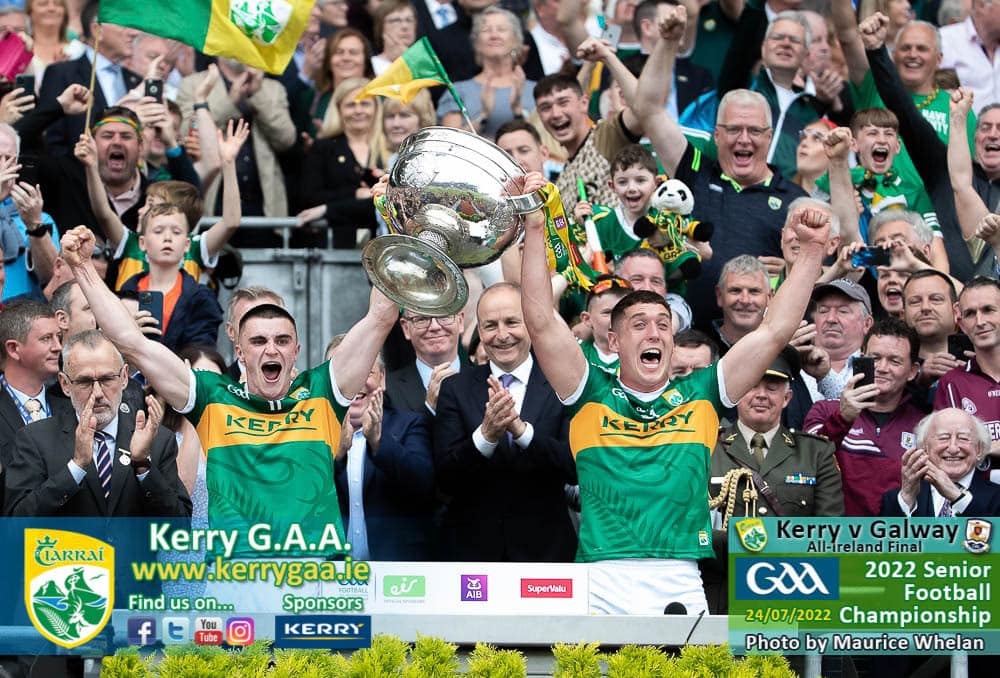 Hope and expectation has been attached to an exciting crop of Kerry footballers, who finished strongly at GAA headquarters to secure a first All-Ireland title since 2014.

With such a proud tradition eight years without Sam Maguire is significant for Kerry, but they carved out a victory.

Ultimately it means Jack O’Connor has steered Kerry to the summit in his three different spells in charge of the Kingdom. It is a remarkable feat.

Kerry just had too much for Galway in the closing stages as they reeled off four points without reply.

The majestic David Clifford rifled over a pressure free from under the Cusack Stand before substitute Killian Spillane and the pacy Gavin White contributed key scores.

Then, just to seal the deal, Seán O’Shea clipped a free and there was no way back for a gallant Galway.

There was so much to admire in Galway’s football during an absorbing match. Shane Walsh concluded with a nine point haul and performed with commendable class.

Cillian McDaid drove forward to nail four points from play, but it still wasn’t enough. Kerry were able to deal with Galway’s cocktail of passion and purpose.

Unsurprisingly the opening period was tight and hard fought with Kerry squandering plenty of opportunities. That was chiefly due to Galway’s gutsy defensive effort as the Tribesmen inevitably had to cope with an aerial bombardment initially.

At the opposite end of the field Galway, prompted by Walsh’s skill, were efficient mining 0-8 from 11 attempts. Kerry only registered 0-7 from 15.

Galway edged 0-5 to 0-2 in front by the 17th minute, but Kerry summoned a response. Paul Geaney (mark), David Clifford, and Stephen O’Brien all guided over points for Kerry to level.

It was 0-7 each on the cusp of half-time when McDaid struck a sweet point to nudge Galway ahead.

After the restart David Clifford remained hugely relevant as Kerry took a 0-11 to 0-10 lead in the 42nd minute.

Once again, though, Galway started to pose some questions. Four of the next five points were scored by the maroon and white outfit with McDaid, Walsh, and Kieran Molloy central.

The Galwegian burst ensured Kerry trailed by 0-14 to 0-12, but Kerry subsequently enjoyed a productive spell.