Defeat for Kerry in 2021 All Ireland Semi Final 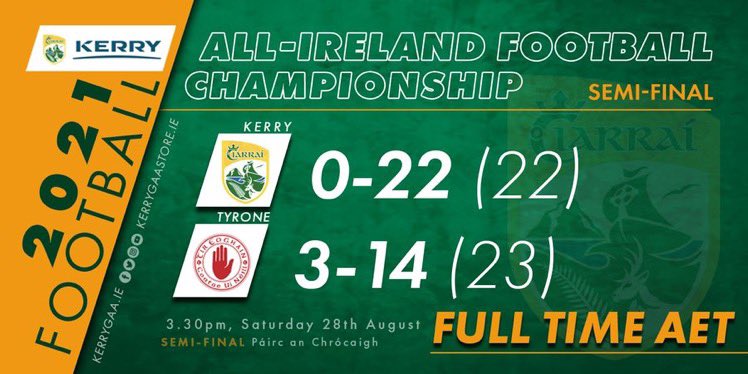 If All-Ireland Final hype is the sort of thing you enjoy, then prepare for a fun couple of weeks.

Mayo and Tyrone supporters will be positively giddy as they prepare for a novel All-Ireland Final, and the rest of us will be counting down the days too.

But first let’s give the people of Tyrone a day or two’s grace to enjoy this All-Ireland semi-final win over Kerry, because it was something special.

Their team played with a wonderful combination of tenacity and opportunism to sink a very fancied Kingdom team, and were more than worthy winners even if they only got over the line by a single point.

It was long forgotten by the end, but Tyrone supporters would have been anxious with how the opening minutes of the match unfolded.

David Clifford opened the scoring after 22 second when he shimmied onto his left foot and curled it over in what by now is his trademark fashion.

A few minutes later he claimed a mark from a Dara Moynihan pass and converted to put his team two to the good.

There was a real pace and intent to Kerry’s play in these opening few minutes, but as the game progressed Tyrone settled.

They were ahead by the eight minute thanks to a Niall Morgan ’45, a converted Mattie Donnelly mark, and a fine Peter Harte point after great link play with Kieran McGeary.

The roars of approval that went around the ground after that score told you those Tyrone supporters now knew for sure their team was in the fight.

The game had settled into a pattern by this stage. Tyrone were defending stoutly, forcing turnovers, and then looked dangerous when they counter-attacked at pace.

Kerry were still capable of moments of magic, largely through the magical David Clifford, but otherwise they were struggling to really find their stride.

Paudie Clifford was being talked about as the most in-form player in the country coming into the match, but wasn’t getting a kick thanks to tight-marking of Conor Meyler.

Stephen O’Brien and Dara Moynihan were getting on a lot of ball, but it was more perspiration than inspiration from a Kerry point of view.

There was more method to Tyrone’s play. When they forced those turnovers they rolled down the field in a white wave with every player backing themselves to get forward.

By the end of the first half all three members of their full-back line – Michael McKernan, Ronan McNamee, and Pádraig Hampsey – would have scored a point each, which testifies to the ambition of their counter-attacking.

Tyrone sourced further momentum from a couple of big minutes when they were very fortunate not to concede a goal at one end of the field and then scored one at the other end.

Kerry butchered a goal chance when David Clifford drove towards goal and passed to Paul Geaney who rounded Tyrone goalkeeper Niall Morgan and popped a hand-pass to Stephen O’Brien while in the act of falling.

O’Brien palmed the ball to the net, but had mis-timed his run and was in the square before the ball reached him so the goal was disallowed.

A couple of minutes later Tyrone showed them how it was done with a brilliant team move.

Kieran McGeary showed bravery to pop a perfectly timed pass even though he knew he was about to be minced by a Gavin White shoulder.

From there Peter Harte and Niall Sludden brought the ball forward and played in Conor McKenna who finished clinically under the advancing Shane Ryan to put Tyrone 1-5 to 0-5 ahead on 24 minutes.

Credit to Kerry, they gritted their teeth and upped their work-rate in response with two big turnovers on Peter Harte and Padraig Hampsey leading to points that gave them some much-needed momentum.

Clifford remain unstoppable whenever they could get the ball to him, and two more from him gave the Kingdom some more momentum.

It looked like the teams would go in level at the break, but then Niall Morgan produced something outrageous.

When he lined up a free from just a yard past the half-way line, your immediate thought was how on earth does he think he has a chance of scoring this?

But, incredibly, he did! He had the benefit of the breeze, but it was still an incredible kick from almost 70 yards that gave his team a 1-7 to 0-9 lead at half-time.

The Ulster champions scored the first point of the second half too through a Darren McCurry free, but, as the half progressed Kerry’s dominance began to grow.

David Clifford clipped two points in the space of a minute, and then Tyrone suffered a real set-back when Niall Sludden was black-carded.

Only some fine defending by Michael O’Neill and Peter Harte prevented what could have been two Kerry goals, but the growing pressure was telling nonetheless as a Sean O’Shea ’45 was quickly followed by a Paudie Clifford point from play to push Kerry two ahead.

Tyrone were hanging in there, but you figured they were in real bother when Darren McCurry was black-carded shortly after scoring a point that left a point between the teams.

Kerry couldn’t make the most of their numerical advantage though, a Tom O’Sullivan point was all they accrued in this period of the match, and they were then landed on the seat of their pants when Tyrone scored their second goal of the game with just two minutes of normal time remaining.

Mattie Donnelly split the Kerry defence with a surging run and then brilliant pass to Darragh Canavan whose blasted shot was parried by Shane Ryan into the path of super-sub Cathal McShane who palmed it to the back of the net to put his team 2-10 to 0-15 ahead.

Your money was on Tyrone now, mainly because David Clifford was struggling badly with an injured leg, but even on one leg the Fossa man was uncontainable.

He won a free that Sean O’Shea converted to level it up again. And when McCurry edged Tyrone ahead again, Clifford won another free that ensured the game was going to extra-time.

When Kerry came back on the pitch without the talismanic Clifford, who could finally do no more, it must have been a huge boost for Tyrone.

They certainly attacked extra-time with the vigour of a team who believed this was their day as McShane knocked over two points and then Conor McKenna scored the third goal of the match to put them five points clear.

The goal came from a speculative shot for a point by the excellent Kieran McGeery which was wide and short of the target and came down on top of Kerry’s Jack Barry and Tyrone’s Tiarnan McCann.

Presumably to prevent McCann gaining possession, Barry made the fateful decision to volley the ball but kicked it straight to McKenna who drilled a brilliant shot to the bottom left corner.

Credit to Kerry, they never get up, and points from Diarmuid O’Connor, Paul Murphy, and Sean O’Shea had reduced the deficit to three points by half-time in extra-time.

The gap was down to the minimum four minutes into the second period of extra-time thanks to points from Paudie Clifford and Paul Geaney, but Kerry were running on empty and just didn’t have enough left in the tank for one final burst of acceleration.

Tyrone managed to hold them out for the next seven minutes, and when the final whistle eventually blew it was the cue for delirium among their supporters.

That mood is unlikely to dissipate all that much over the course of the next two weeks.