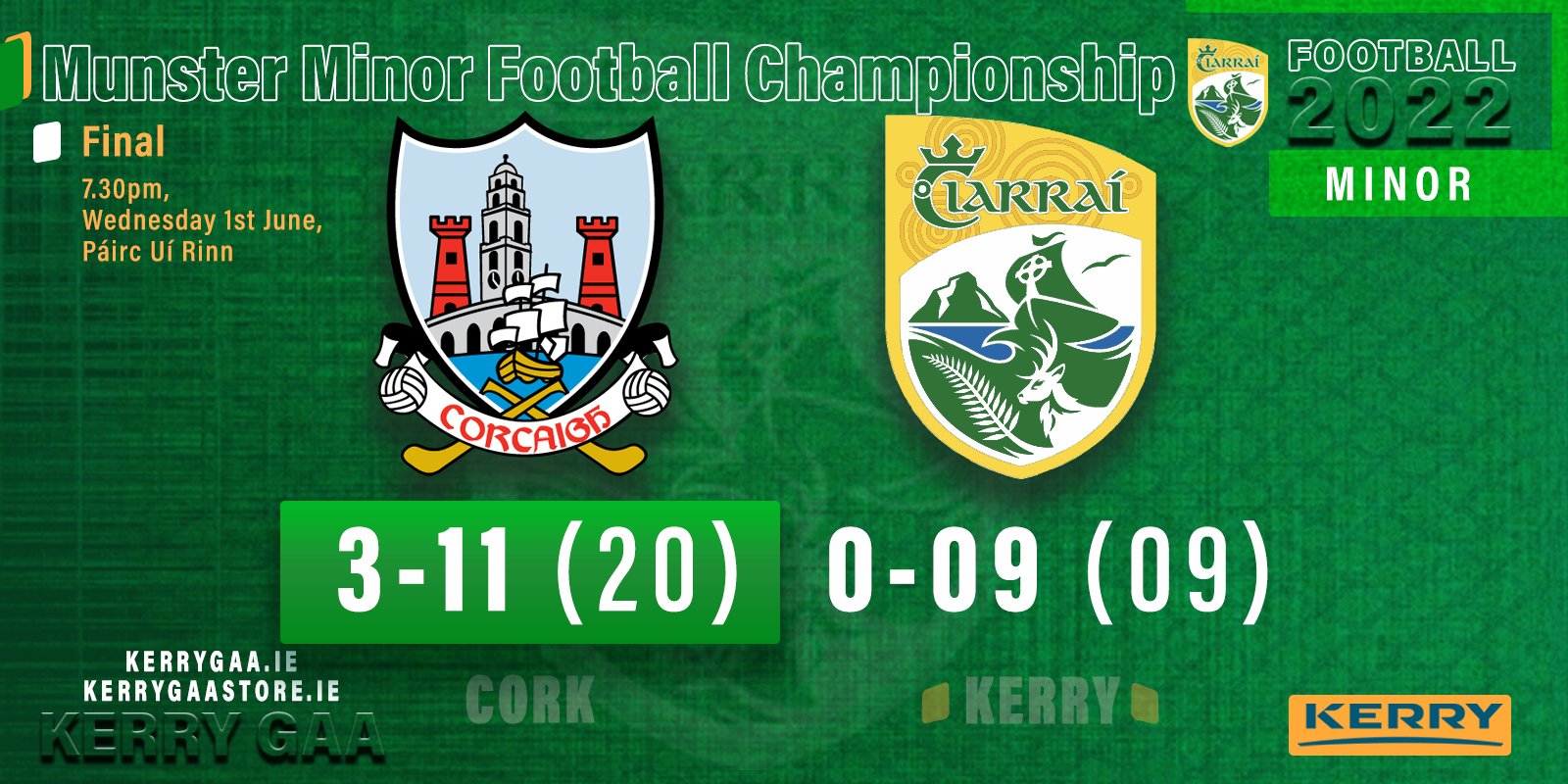 Cork secured Munster Minor Football Championship glory, following what was a thoroughly impressive performance and an eleven point victory over Kerry in this final played at Páirc Uí Rinn.

Just three weeks ago Cork were defeated by this Kerry side by 14 points. However they most certainly turned the formbook on its head with a fine display.

Kerry got the opening score of the game with a well taken point by Paddy Lane after just 30 seconds, with Cork responding in kind with a fine Colm Gillespie score moments later.

Ed Myers kept his cool to put the Rebels in front for the first time in the contest with a lovely effort, before Kerry responded through a Jack O’Sullivan point.

Through a pair of well taken points from Brian Hayes, Cork led 0-5 to the 0-3 of Kerry after 13 minutes and deservedly so.

Cork showed a solid desire and work rate in the first half as they produced a strong showing.

A monster of a point from Colm Gillespie summed up the mood of the Rebels during the opening thirty minutes.

Cork extended their advantage when Hayes reacted quickest to drill the ball home to the back of the net, with Darragh O’Donovan keeping his cool to slot over a crisply taken point.

The Leesiders ended the opening half with an Olan O’Donovan score, as following an impressive opening half Cork held a seven point advantage at 1-9 to the 0-5 of Kerry.

Alan O’Connell got another Cork point early into the second half. The Kingdom were reduced to fourteen men after Darragh O’Connor was shown a straight red card, as Kerry got points from Cormac Dillon and Ian O’Sullivan to reduce the deficit.

On 44 minutes Cork well and truly had a strong grip on this decider, when Alan O’Connell went on an impressive run through the Kerry defence before slotting the ball impressively into the back of the net.

Things got even better for Cork less than three minutes later, when Hayes was on hand to slot to the net after some fine build-up play by Gearoid Kearney to set him up. This saw Cork lead 3-10 to Kerry’s 0-7 with less than twelve minutes remaining.

Kerry got late consolation points from Darragh O’Connor and Cormac Dillion. But this evening was to well and truly belonged to Cork, with Ed Myers adding a late second half stoppage time point to cap off what was a sensational Cork display.