A win for Kerry over Roscommon – AFL, Roinn 1 South 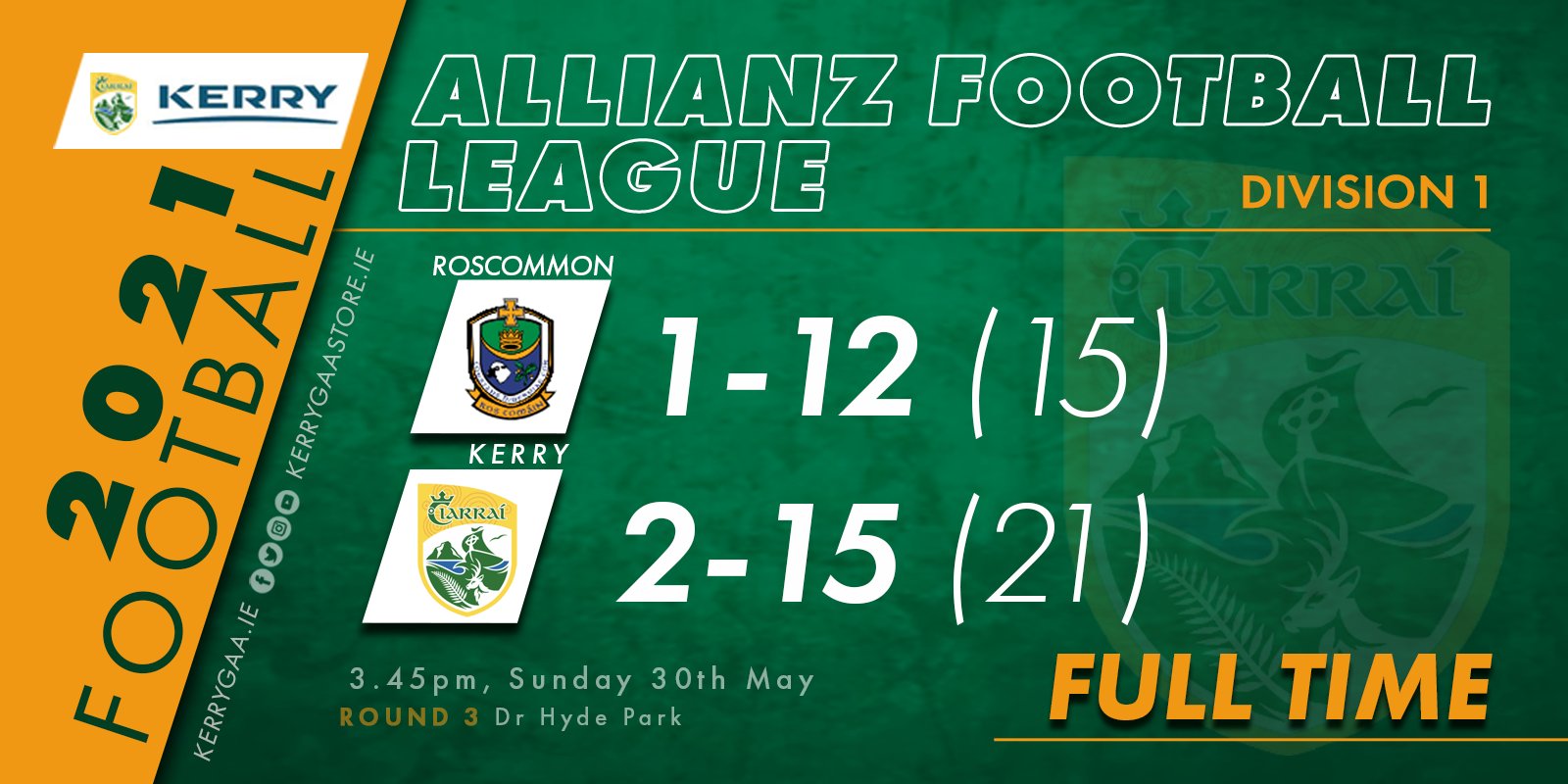 Final quarter goals from David Clifford and Joe O’Connor proved decisive in an Allianz League Division One contest at Dr. Hyde Park this afternoon that was fascinating from the point of view of what lies ahead for both of these counties, but sometimes lacked intensity and urgency in its own right.

Kerry travelled to Roscommon knowing that they needed to get at least one point from the game to be sure of their place in the league semi-finals, though a win for Dublin in Tuam would be enough for them, even if they fell short at the home of Anthony Cunningham’s side. From a Roscommon perspective, there was absolutely nothing to play for except pride, and a desire to find some positive momentum in advance of a relegation playoff, which they knew would be against Armagh regardless of the result of this fixture.

When measured by that score, both sides will feel they got what they needed out of this game. Despite losing substitute Tadhg Morley to a straight red card just minutes after he came on the pitch, the Kingdom were able to dig deep and outscore Roscommon by 2-2 to a goal in the final quarter, which was enough to make sure of the win. Roscommon, who shipped a heavy beating to Galway last time out, were much improved in defence and will be happy to have shown up well at midfield and half back, which had been problem areas for the group so far.

The first quarter definitely had a shadow boxing quality to it, with points from Tony Brosnan and Conor Cox among the highlights as the Rossies edged the period by the odd score in seven.

As has been the case in so many games this weekend however, the hydration interval proved to be a momentum shifter, and the Kingdom were revitalised afterwards. Paudie Clifford got the first of two points he registered this afternoon, Diarmuid O’Connor fired over the first of his three from midfield, and Kerry were rolling as they moved into a four point lead.

0-10 to 0-7 at half time became 0-11 apiece after ten minutes of the second half. Diarmuid Murtagh was on the mark, his brother Ciaráin struck two, before a mark from Enda Smith tied up the game. Shane Killoran was dropping out from wing forward to make a real impact at midfield, while defensively the shackles were being put on Kerry’s star-studded forward line. Kerry kept their noses in front with two of the next three scores, but Morley’s high tackle on Cian McKeon gave Roscommon an extra man, and even more reason to believe that they might snatch a win.

Instead Kerry found a way, proving that they can grind out wins as well as dazzle the country with their spectacular scoring power. Paudie Clifford broke through and set up his brother for a simple palmed goal after 57 minutes, a fifth goal in three starts for the Kerry captain. Points from O’Connor and David Clifford moved the gap out to six, before an exchange of goals in the closing minutes – a superb finish from Roscommon substitute Conor Devaney, cancelled out by a green flag from Kerry sub Joe O’Connor – completed the scoring.