A win for Kerry over Dublin! 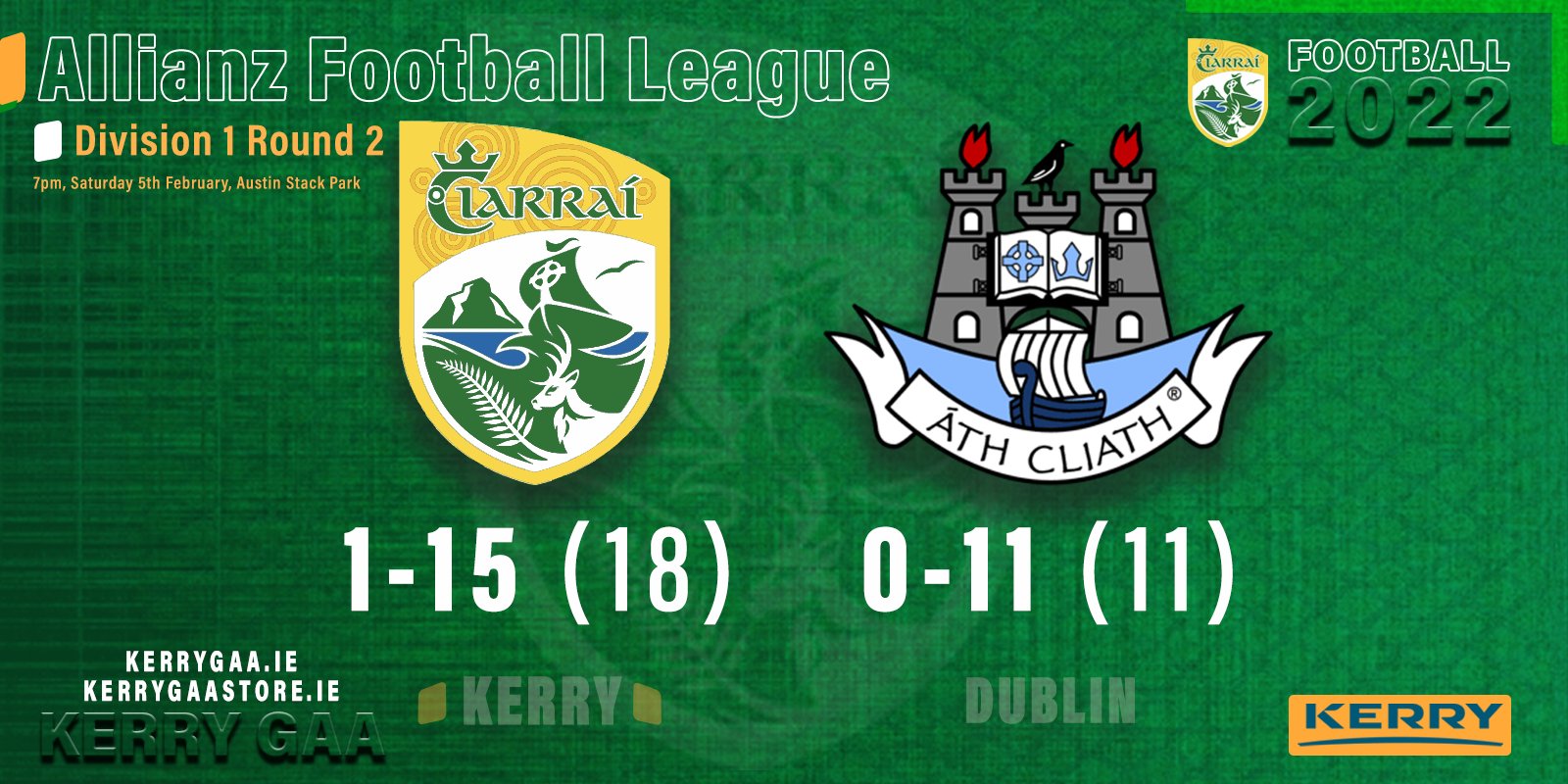 Kerry were left singing in the rain this evening after securing their first win of the League with a seven-point win over Dublin at a rain-lashed Austin Stack Park that saw the visitors produce their second disappointing performance in a week.

That Kerry managed just one point in the entire second half speaks to their dominance in the first half, that they could afford to lose the second period by six points and still win by seven.

What the result might predict for a Championship meeting between the two teams – if it comes to pass – is anyone’s guess, but Kerry were intent on inflicting another loss and wound on a Dublin team that is beginning to make losing look like a habit.

Kerry won this game in the first half, taking a 13-point lead to the interval, and thereafter it was all about saving face for Dublin. Dessie Farrell might take some consolation for that second half revival but it is the first 35 minutes that will haunt the Dublin manager.

For Kerry it was almost all good, so good in fact that they could afford the luxury of a missed penalty from David Clifford in the first half.

The penalty miss came just after Sean Bugler had pointed for Dublin to have them trail 0-4 to 0-5, and it prefaced a Kerry assault on the Dublin posts in the driving wind and rain.

Dublin did have the ball in the Kerry net in the first half when Dean Rock’s shot went in through a combination of the post and Shane Murphy’s hand, but an off the ball foul by Niall Scully on Dan O’Donoghue in the build-up saw him black carded and the goal disallowed.

It was a timely escape Kerry were happy to play, and thereafter they went to town on the Dubs for the rest of the half.

In the 26th minute Loran O’Dell overcooked his pass to Rock with just Murphy providing the Kerry cover at that stage, but Kerry weren’t nearly as wasteful.

Points from Moynihan, Paul Geaney, David Clifford (two) and a Sean O’Shea free made it 0-12 to 0-4 and then David Clifford’s handpass into Moynihan got the finish it deserved: a right-footed shot to the top corner of Comerford’s goal that made it a 12-point game on the 35-minute mark.

The half finished with a Geaney point, a Jack Barry black card, and Dublin reeling from a 13-point deficit going to the dressing room.

Thereafter the game petered out with black cards for Tom Lahiff and then Paudie Clifford, while Ciaran Kilkenny, Brian Howard, Brian Fenton, Ryan Basquel and Dean Rock (three frees) restored some bit of respectability for Dublin in what was their second loss of the campaign.