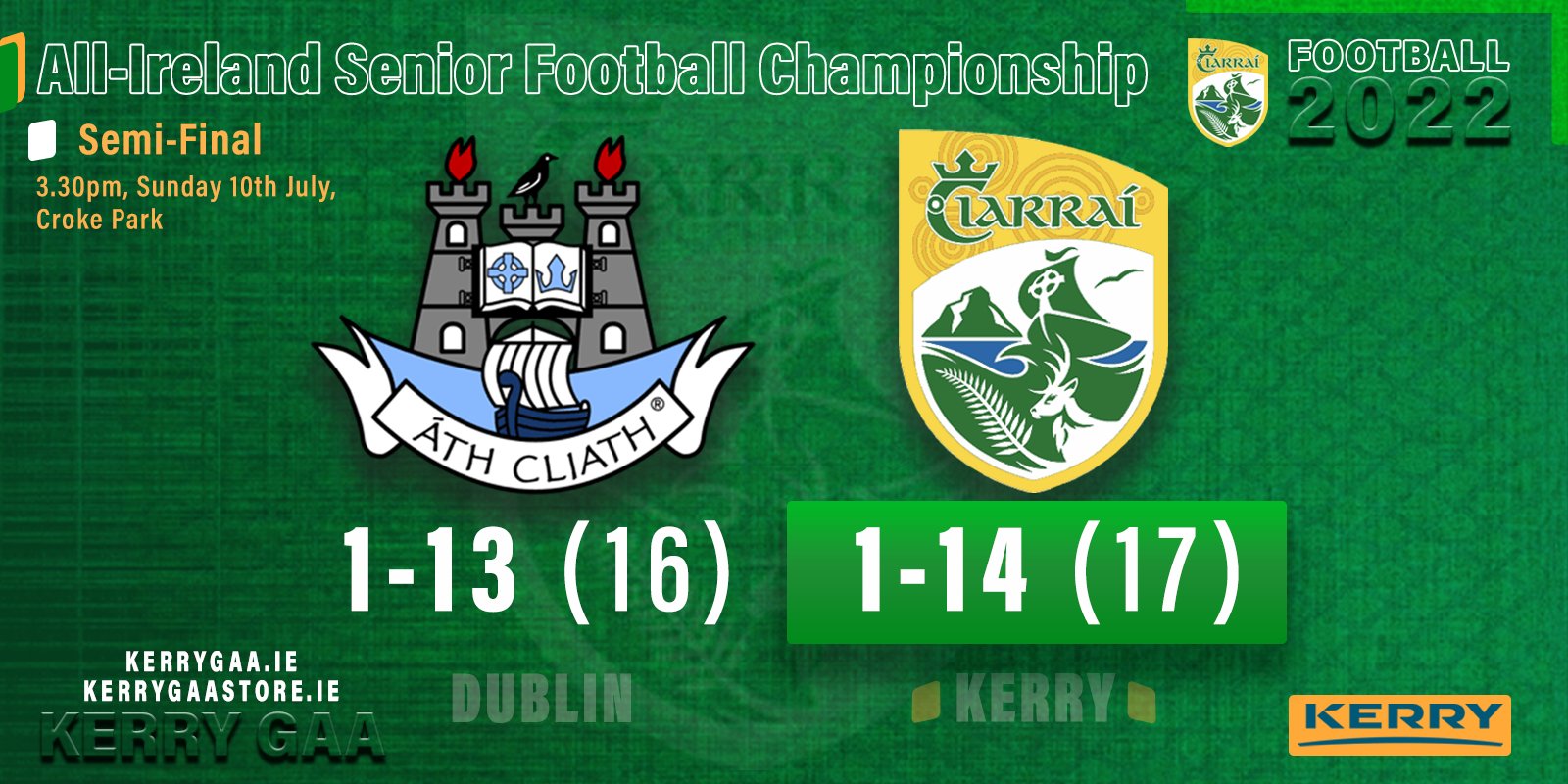 Sean O’Shea displayed nerves of steel and incredible technique to win this dramatic All-Ireland SFC semi-final for Kerry by converting a 50-yard free at the death.

It was a wonderful score, and all the more impressive considering he was kicking into a stiff breeze and a raucous Hill 16.

But the Kenmare man made it look easy as his kick sailed over the bar with plenty to spare.

It must have been a hugely satisfying moment, particularly as he’d missed a first-half penalty that could have made this a much more straight-forward game for Kerry.

They were much the better team in that first-half and for a good portion of the second-half too, but had to do it the hard way in the end because Dublin showed such courage in the face of adversity.

Inspired by warriors like James McCarthy, Ciarán Kilkenny, and Brian Fenton, they summoned a second-half comeback that very nearly turned the game on its head.

Kerry showed character too because it would have been easy to wilt when Dublin suddenly caught fire in that second-half, and in the final reckoning Jack O’Connor’s team were definitely deserving victors.

From the very start this was an absorbing contest played at an incredibly high tempo by two superbly conditioned teams.

Every turnover felt like a statement, every big hit drew loud acclaim from the supporters.

Such was the ferocity with which both teams tackled that ball handling had to be superb to transition from defence to attack successfully, and in the opening minutes both teams did that very well.

Lee Gannon opened the scoring for Dublin with a sweet point from the left side off his right foot, but Sean O’Shea responded immediately for Kerry with a nice left-footed score.

Two minutes later the powerful Kerry centre-forward did even better, scoring the first goal of the match when he charged in along the end line and shot low past Evan Comerford.

It was poor defending by Dublin to give him the latitude to get his shot off, but credit to O’Shea for backing himself to go for the jugular.

Dublin’s response to this early set-back was positive. Dean Rock converted a free and then Brian Howard pointed after James McCarthy’s shot at goal was well saved by Shane Ryan.

But as the half progressed, Kerry started to turn the screw. Their defending was superb as they packed their half of the pitch whenever Dublin had possession and put huge pressure on the ball.

This approach yielded a series of big turnovers that delighted the Kerry crowd and when Dublin forwards did create an opportunity to shoot they were usually doing it under pressure.

Kerry’s counter-attacking gameplan was working well, and when they got the ball forward to David Clifford he showed he was very much in the groove.

He scored his first from play on 12 minutes, converted a brilliantly taken mark seven minutes later, and then scored his second from play two minutes after that to push Kerry 1-6 to 0-5 ahead.

Dublin sustained another body blow when John Small was then black-carded for an off-the-ball pull down, but Kerry didn’t quite make as much of a benefit of their numerical advantage as you felt they might.

A Dean Rock free reduced the gap to three again before Kerry had a glorious chance to put real daylight between the teams when Gavin White won a penalty after being fouled in the square by Lorcan O’Dell.

Sean O’Shea fluffed his lines with the subsequent kick though, with his side-footed effort well saved by Evan Comerford.

Kerry did have the last say of the half though and it was that man David Clifford again, bullying his way past three Dublin defenders to curl over another glorious score that left the Kingdom leading by 1-8 to 0-6 at the break.

Clifford weaved some more magic right at the start of the second half to create a goal-scoring chance for Stephen O’Brien with a brilliant cross-field pass.

O’Brien probably should have kicked it first time, soccer-style, but instead tried to collect the ball on the run and fouled the ball by picking it straight off the ground.

Kerry did score the first point of the half two minutes later and once again it was that man Clifford, this time curling over another left-footed after jinking outside his marker Michael Fitzsimons.

You felt like Kerry had the wherewithal to start pulling away, but Dublin stuck grittily to the task and points from Brian Fenton and Paddy Small kept them in touch.

Then came what they really craved, a goal to blow the game wide open again.

It was a sumptuous score too. A handling error from David Moran turned over possession and Dublin swept down field with the ball eventually reaching Cormac Costello on an overlapping run.

The Whitehall man had a lot to do, but he struck his low cross-shot brilliantly to the net off the far post.

When Ciaran Kilkenny then hand-passed a point a minute later there was just a point between the teams and the roars from the Dublin supporters told you they believed this would now be their day.

Credit to Kerry, they managed the game well in the next 15 minutes, holding onto possession for concerted periods to stifle Dublin’s momentum.

Paudie Clifford was having a big second-half and two points from him put a buffer between the teams again.

But Dublin just refused to die and two well taken point from James McCarthy and Ciaran Kilkenny reduced the deficit to the minimum again, 1-12 to 1-11, with seven minutes of normal time remaining.

This was now a gut-test for Kerry, and their supporters must have had their heads in their hands when Diarmuid O’Connor missed a good chance that would have put them two clear with three minutes of normal time remaining.

A brilliant Michael Fitzsimons interception then gave Dublin the impetus to find a 69th minute equaliser. It was the increasingly influential Ciaran Kilkenny who scored it, turning smartly onto his right to convert under pressure.

Sean O’Shea must have thought he’d won the game for Kerry when he won and a converted a close-range free in the fourth of five allotted minutes of injury-time.

But Dublin went straight down the field from there and won a free of that Dean Rock clipped over.

At that stage everyone in the stadium was preparing for extra-time, but Kerry showed great ambition to take the kick-out quickly, work the ball down field, and win one more free when David Clifford hauled down 50 yards from the posts.

Up stepped O’Shea to land that monster of a kick to seal the Kingdom’s first championship win over Dublin since 2009 and send Kerry supporters in the stadium delirious with joy.