A win for Antrim in the Joe McDonagh Cup Final 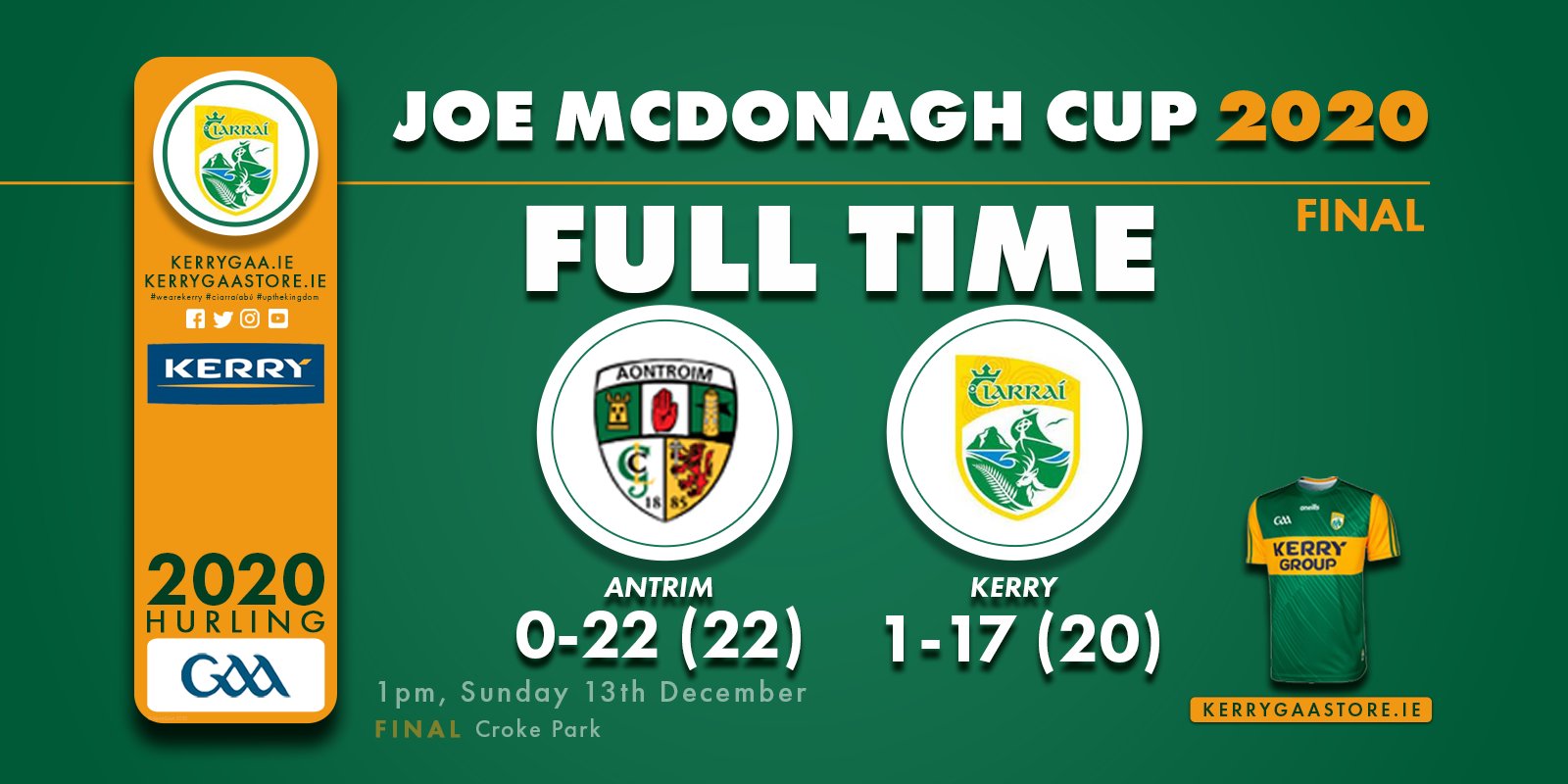 Antrim held on at Croke Park for their fourth and by far most significant win over Kerry in 2020, securing the Saffrons the Joe McDonagh Cup title.

Antrim, who’d beaten Kerry by margins of six, three and seven points throughout the year in the League and Championship, were six clear again with 10 minutes to go.

But Fintan O’Connor’s Kerry refused to relent and outscored their old rivals by 0-7 to 0-3 in the closing minutes to push Antrim all the way.

The closest they got was a two-point deficit though and back to back McManus points from frees in stoppage time ultimately proved the insurance scores.

Antrim resisted the temptation to include talisman McManus from the start despite taking his place among the subs following a hamstring injury.

He suffered that setback in the Division 2A League final defeat of Kerry in mid-October and missed all of their McDonagh Cup group campaign.

Antrim got by without him in those games and, initially, hinted that they would have little problem again in his absence as they surged 0-6 to 0-2 clear by the water break.

Clarke was their key man in this spell with four of the six points, two of which came from placed balls.

The half would swing on two bizarre moments, the first of which occurred two minutes after the water break and resulted in a Kerry goal.

Antrim full-back Matthew Donnelly should have dealt with a speculative Shane Conway ball in from the wing but somehow missed his catch, leaving Mikey Boyle in space to gobble up the loose ball and strike to the net.

Conway slotted a free for the Munster men soon after and suddenly the sides were tied at 0-6 to 1-3.

Kerry were clearly energised by the goal gift and a tit-for-tat scoring encounter played out until the interval with the teams level three more times.

The Kingdom took the lead for the first time three minutes into stoppage time when Michael O’Leary opened his account with a point.

But Antrim were so unfortunate not to have grabbed a goal themselves moments earlier during the second remarkable episode of the half.

Niall McKenna’s shot looked set to roll over the goal line but ‘keeper John B O’Halloran somehow got back to clear the ball before all of it had crossed the whitewash.

Kerry led 1-7 to 0-9 at half-time but it was clearly anyone’s game and a Clarke point seconds after the restart for Antrim levelled it up yet again.

Antrim reasserted their authority throughout the third quarter and reeled off six points in a row to put significant daylight between the teams for the first time.

McManus was sprung from the bench in the 45th minute and required just three minutes to split the posts with an audacious effort from way out on the right wing.

McManus’ second point from a 65 came just before the water break and left the northerners in pole position with a 0-16 to 1-8 lead.

Their lead was out to six points by the hour mark with Clarke and sub Conall Cunning both on the mark.

Kerry got a strong kick from the bench and subs Padraig Boyle, Colm Harty and Brendan O’Leary all pointed as they piled on the pressure in the closing minutes.

But the closest they got to Antrim was two points and the 2017 Christy Ring Cup finalists held on for a hugely important win.