Strong second half sees Kerry through to Munster Final 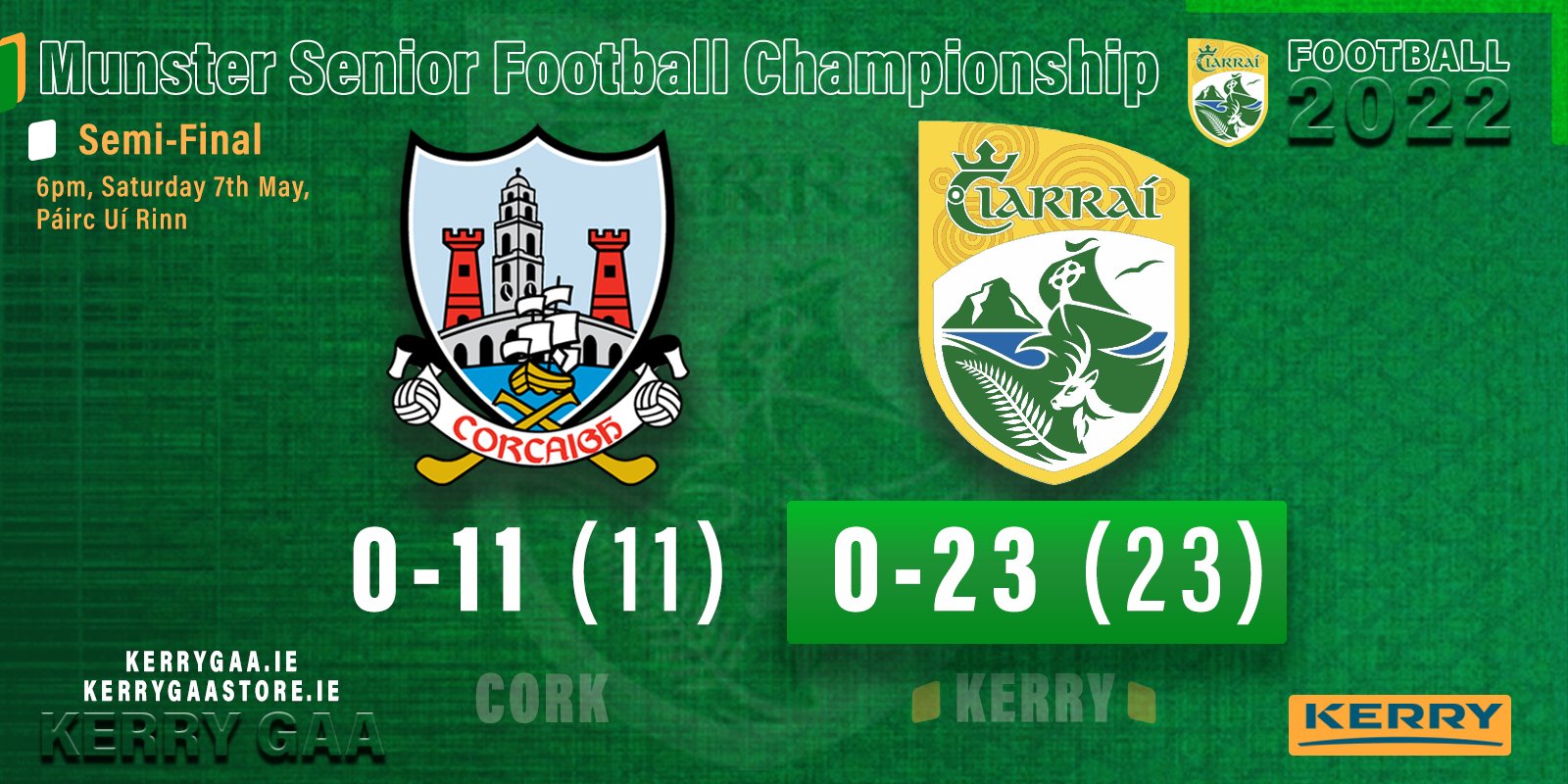 After all the to-ing and fro-ing over the venue for this Munster SFC semi-final, the old order was maintained as Kerry went to Pairc Ui Rinn and came away with a 12-point win over Cork that was, by and large, in the region of what the winning margin was expected to be.

Kerry won’t be cock-a-hoop about their overall performance, and Cork won’t be as depressed as they were after the 22-point loss in the corresponding fixture last year, so all in all everyone left the small but well turned out ground with something to work on.

For 50 minutes Cork made a real contest of this game, coming within a point, 0-10 to 0-11, of the Munster champions as the teams turned for the final stretch in the 50th minute.

The Rebels, perhaps feeding off the sense of injustice that they were being forced up the road to Killarney for this fixture, gave as good as they got for the bones of the first hour, so much so that Kerry had to call on a well of experience off their bench to get the job done.

When Cathail O’Mahony raked over the second of two huge points in the second half Cork were back within one point of Kerry and giving the Rebel support in the 10,743 crowd something to shout about.

But Kerry kicked the next eight points – helped by the introduction of Paul Geaney, David Moran, Paul Murphy and Micheal Burns – and the game ran to its inevitable conclusion as Cork ran out of ideas and gas.

Cork opened the scoring inside the first minute, O’Mahony winning a free for Stephen Sherlock to convert, but scores from David Clifford (2), Paudie Clifford, Stephen O’Brien and Sean O’Shea (2) pushed Kerry into a 0-7 to 0-3 lead after 20 minutes.

And it seemed as if the visitors might be making their second quarter push to kill off the Rebels, but Cork steadied themselves were just 0-9 to 0-7 behind at the interval, with Sherlock kicking five frees and another from play.

Jack O’Connor surely had stern words for his players at half time and whatever was said had the desired effect – eventually.

Kerry pulled three clear early in the third quarter but O’Mahony nailed two monster points to haul Cork back to within one before Kerry sent for the cavalry. Geaney, Moran, Murphy and Burns added much needed energy and nous to what was hitherto a patchy and scratchy Kerry performance.

Eight unanswered points saw Kerry finally shake off a belligerent Cork side whose Achilles heel was their ability to work the Kerry defence and scoreboard enough.

Next up for Kerry is a Munster Final against Limerick or Tipperary in three weeks in Killarney while Cork head out on the Qualifier route.