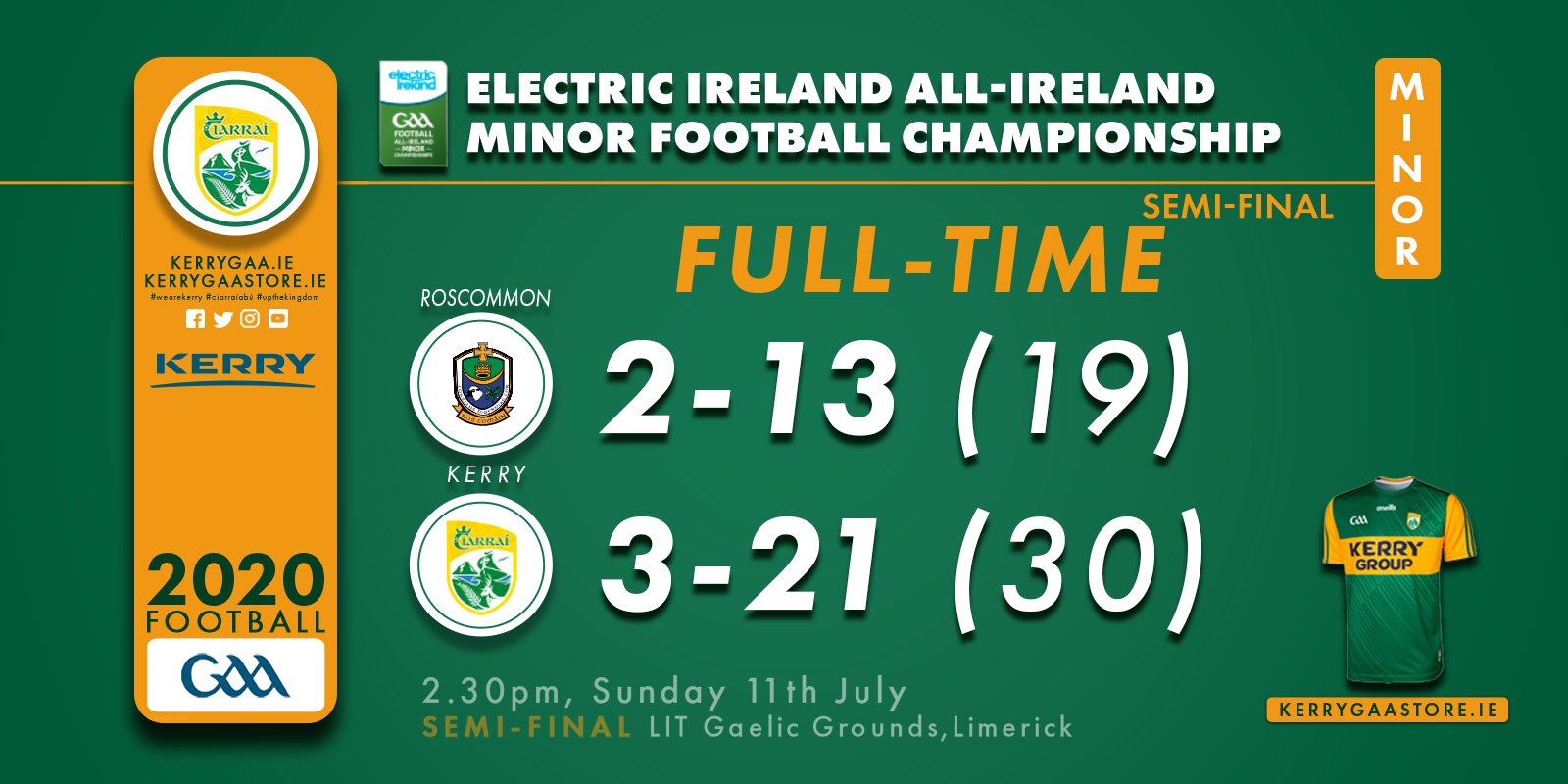 John O’Dowd at the Gaelic Grounds

A blistering finish to the first half propelled Kerry into the 2020 Electric Ireland All-Ireland MFC Final after a hugely entertaining contest with a gallant Roscommon at a sunny Gaelic Grounds in Limerick.

After Ryan Conlon had rounded the Kingdom netminder, Sean Broderick, to slot the ball into the back of the net in the 20th minute, instantly replying to a fantastic left-footed finish by Darragh O’Sullivan at the other end, the sides were on level terms (2-3 to 1-6), and it appeared as if the pendulum would continue to swing as we headed towards the half-time break.

However, with Kerry getting on top of the possession stakes around midfield as Roscommon struggled to keep the ball on their own kick-outs, James Costello’s charges put the foot on the accelerator with seven points on the trot to put clear daylight between the protagonists at the interval, despite a superb effort from Rossies captain Eoin Colleran that closed out the first half scoring (2-10 to 1-7).

Wing-forward Keith Evans was the undoubted star of the opening period, culminating with a personal tally of 1-3 from play, and his composed right-foot precision finish to the Roscommon net in the ninth minute, after great initial work from Oisin Maunsell and William Shine, epitomised the combination play and effective movement of an impressive Kerry forward division.

Kerry had propelled themselves ten points clear by the second half water break (2-17 to 1-10), with the outstanding Evans, O’Sullivan and Cian McMahon continuing to shine up front, but Roscommon, most certainly, never threw in the tool, and inspired by Conor Hand, they made a lightning start to the fourth quarter that almost gave them a glimmer of hope of rescuing the situation.

The never-say-die Darragh Gately notched a free, Hand fired in a goal and a point, and Kerry’s lead had been cut to five points. Could the Connacht side perform a miracle? Not on this occasion.

A piece of inspirational thinking from O’Sullivan caught the losers’ defence unaware when his crossfield delivery from a scoreable free was collected by McMahon and rocketed to the roof of the net to finally seal the Munster champions’ place in next week’s All-Ireland decider against Derry.

All in all, a magnificent confrontation between two excellently-prepared outfits, and when you consider that they hadn’t kicked a competitive ball in anger since Christmas, they deserve every ounce of credit that they will receive.