You are here: Home/ News/ Kerry Triumph in Eirgrid Munster U-20 Final 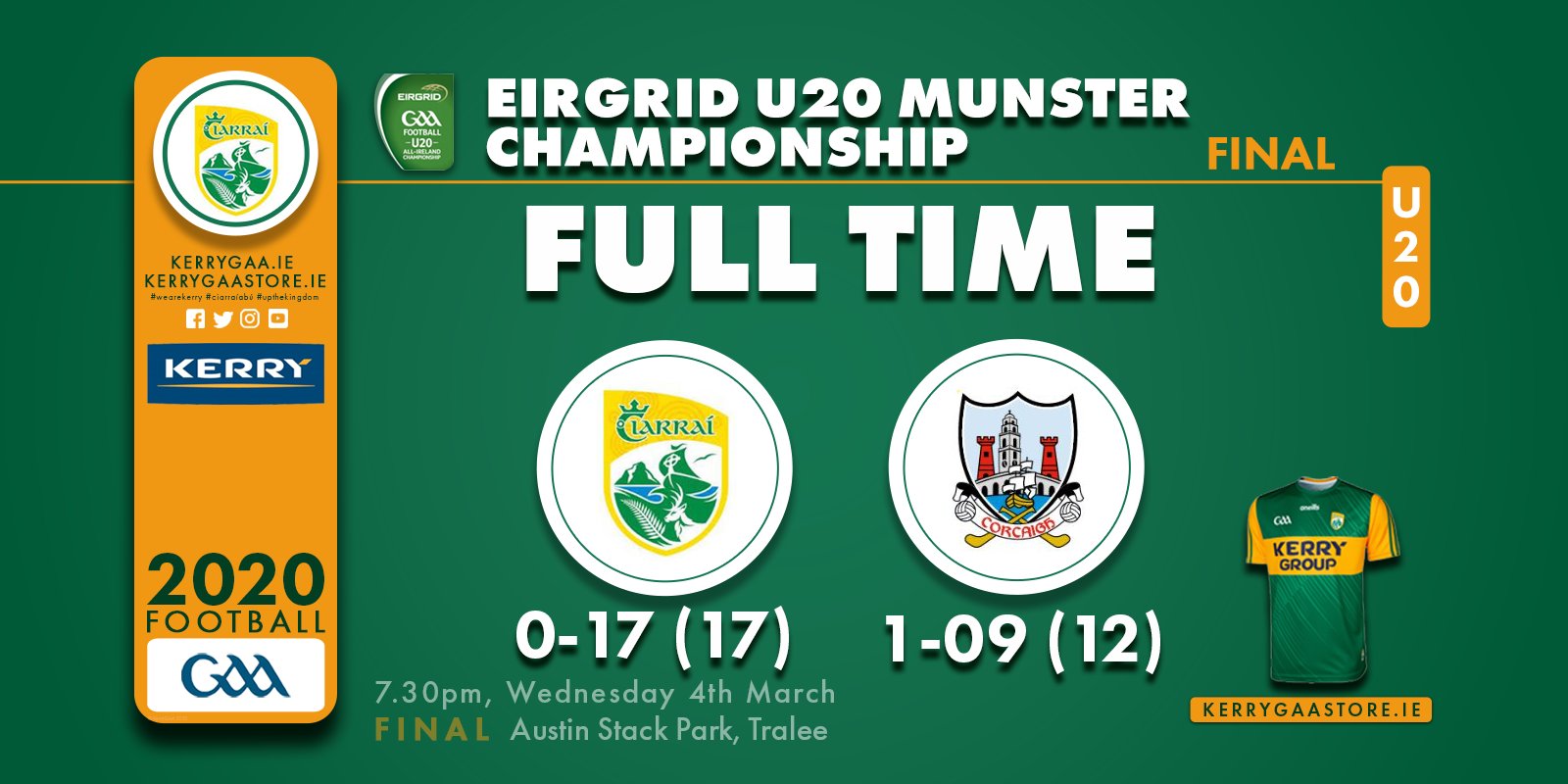 A powerful and productive second half saw Kerry reclaim the Munster Under-20 football title after seeing off All-Ireland champions, Cork.

The Kingdom outscored the Rebels by 0-12 to 0-3 in a statement second period, overturning a four-point half time deficit and easing into an All-Ireland semi-final against Galway or Roscommon on St Patrick’s Day.

Both counties had been less than impressive in their respective semi-final wins, but Cork were the slight fancy to retain their provincial title. And by half time they were on script. Kerry had other ideas in the second period, and went about their business immediately with points from midfielder Darragh Lyne and a free from Paul Walsh.

Cork hit back with a fine long-range score from joint-captain Mark Cronin, but it was clear that the momentum had already shifted. Where Cork had been all power and speed and directness in the first half, now Kerry had the measure of the champions, and were hoovering up most of the ball around middle and running all the best angles and lines.

Ruaidhri O Beaglaoich had to be hauled down en route to goal to present Walsh a tap-over free, and when Paul O’Shea and then Sean Horan pointed the gap was gone; 0-10 to 1-7.

Thereafter it was a near Kerry procession with a succession of points: O Beaglaoich converting an advanced mark, O Beaglaoich again from play, and the two from sub Sean Quilter pushing Kerry into a 0-14 to 1-8 lead.

Blake Murphy fired over Cork’s third and final point of the half to make it a two-point game, but Kerry weren’t for catching, with O Beaglaoich (2) and Sean Keane sealing the win.

The first half was a story of two goal chances: one missed by Kerry in the 16th minute and the other converted by Cork in the 25th minute.

That green flag was, more or less, the difference between the teams at half time, with both sides rueing plenty of missed chances, most of them undercooked shots that dropped short.

Kerry were first on the scoreboard through O Beaglaoich’s free in the fifth minute, but there was never any more than two points between the teams until Blake Murphy struck Cork’s goal late in the half.

Patrick Darcy and Killian Falvey converted to edge Kerry 0-3 to 0-1 in front, but Cronin (free) and Jack Murphy replied to level it up. Moments before Murphy’s score O Beaglaoich got inside his man and teed up Darcy a couple of metres from the goal line, but a moment’s hesitation by the Kerry no.11 allowed David Buckley recover from a slip and make a brilliant goal line block.

It was 0-4 apiece when Cork’s no. 11, Aodhán Ó Luasa dispossessed Dylan Casey and put Blake Murphy through, but the joint-captain still had plenty to do. But do it he did, calmly side-stepping Marc Kelliher and slipping the ball to the Kerry net from a couple of feet out.

That score lit a fire in Murphy, who added two late points to give the Rebels a 1-6 to 0-5 interval lead, even though they had kicked four scoreable shots short into Kelliher’s hands.

Kerry were guilty of wastage, too, in that first period, with five wides and a couple of under hit efforts hurting them on the scoreboard, but they got their radar aligned in the second period to keep their hopes of a first All-Ireland title since 2008 alive.