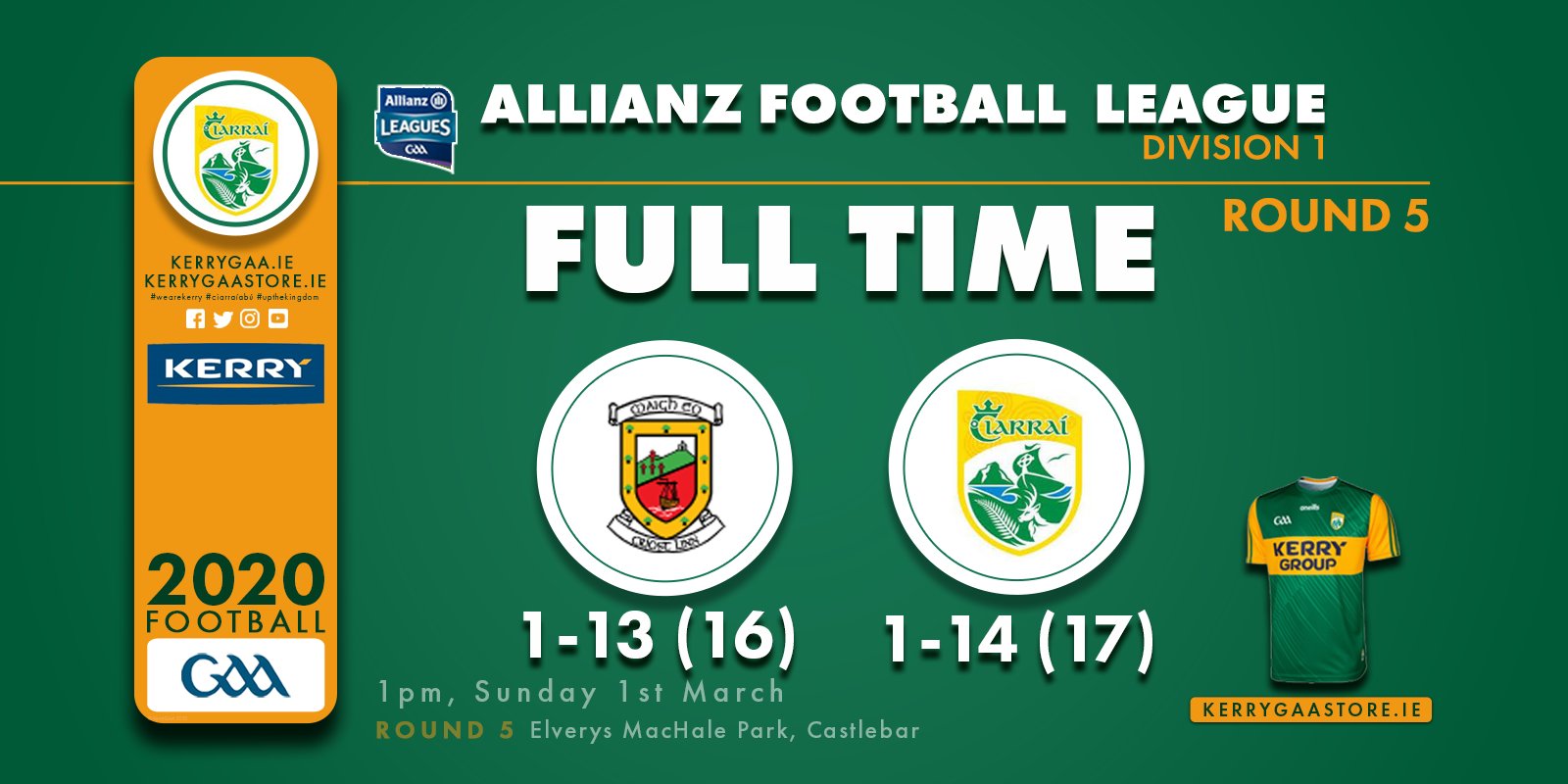 Kerry left Castlebar with the points after they were pushed all the way by a Mayo side who put a very poor first half behind to almost reel in the Munster champions.

Kerry hit the ground running in MacHale Park rattling the back of the net inside the opening minute. Sean O’Shea struck after he was played in by Tommy Walsh following Micheal Burns’ interception of a poor Mayo clearance from their full back line that got caught on the breeze.

O’Shea landed his sides first point of the day not long after from a free and Gavin White made it 1-2 to 0-0 on four minutes and a minute later they could have been out of sight after Kerry were awarded a penalty when Keith Higgins fouled Dara Moynihan.

David Clifford stepped up to take on the responsibility for the spot kick, but his effort crashed back off the bar and away to safety.

Mayo opened their account through a Darren Coen free and Mayo looked to be getting a little bit of a grip of the game, but they kicked a number of wides and dropped the ball short into the 'keepers hands.

Moynihan and Parsons swapped points before Kerry hit three in a row from Clifford, O’Shea and Tony Brosnan to lead 1-6 to 0-2 with 23 minutes gone.

They would push that lead out to 1-18 to 1-2 as the game approached the end of the half with Clifford and Michael Burns adding points before Kevin McLoughlin replied with two injury time frees to send Kerry in leading 1-8 to 0-4 at the short whistle.

James Horan made three changes at the break with Tommy Conory, Eoin O’Donoghue and Eoin McLaughlin coming into he action and inside seven minutes they had cut the gap back to five points with Diarmuid O’Connor slotting over two close range frees.

The Mayo challenge was dealt a major blow when Oisin Mullin was shown a black card for a trip on David Clifford after the ball had been played.

Mayo did close the gap to three points by the 47th minute when Ryan O’Donoghue and Eoghan McLaughlin kicked good points from play, but Kerry went four in front again a minute later when Sean O’Shea kicked skyscraper from well out the park.

David Clifford put five between the teams holding off Lee Keegan to win the ball and then arc it over the bar on the run expertly.

But Mayo weren’t going to bend the knee that easily and Eoghan McLaughlin turned over Shane Ryan as he tried to work his way out from goal, the Westport man traded passes with Aidan O’Shea and hammered the ball home on the run to to put just two between them.

Diarmuid O’Connor pointed for Kerry - but points from Eoin O’Donoghue and Aidan O’Shea had the game back to a one point contest with ten minutes left to go in normal time.

Stephen O’Brien marked his introduction with a fine point to edge Kerry two clear with seven minutes left on the clock as both sets of supporters got settled in for a grandstand finish. Tommy Conroy pulled it back to a one point game as the rain started to spill.

The atmosphere started to ratchet up in the stand and the action got tougher and harder, Kerry hit two points in quick succession through Paul Geaney and Sean O’Shea to look like they were going to see out the Mayo fight back - but Paul Towey drove over a free and Kevin McLoughlin pointed to put just one between the teams as the four minutes of injury time elapsed.

There was still time for one last Mayo chance, but Keith Higgins’ effort drifted just wide of the target and Kerry went home with the spoils.