Kerry triumph over Offaly - AHL, Round 2

You are here: Home/ News/ Kerry triumph over Offaly - AHL, Round 2

Kerry triumph over Offaly - AHL, Round 2 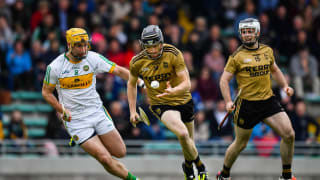 Kerry and Antrim are very much in the driving seat for league final places in Division 2A after they picked up key victories in home fixtures this afternoon.

The clash between Offaly and Kerry at Austin Stack Park in Tralee was the headline fixture in the division, a repeat of the Joe McDonagh cup clash that led to Offaly’s relegation last year, and the early evidence suggested that the Faithful County were on course to secure a measure of revenge.

Eoin Cahill shot six frees as they moved 0-10 to 0-3 clear, though Colum Harty’s goal in first half injury time changed the landscape of the tie.

Again Offaly got out to a decent start after half time but the concession of a second goal to Jordan Conway and then a red card for Cillian Kiely left them with an uphill battle and Kerry powered on well, holding the visitors scoreless to win by 2-11 to 0-14.