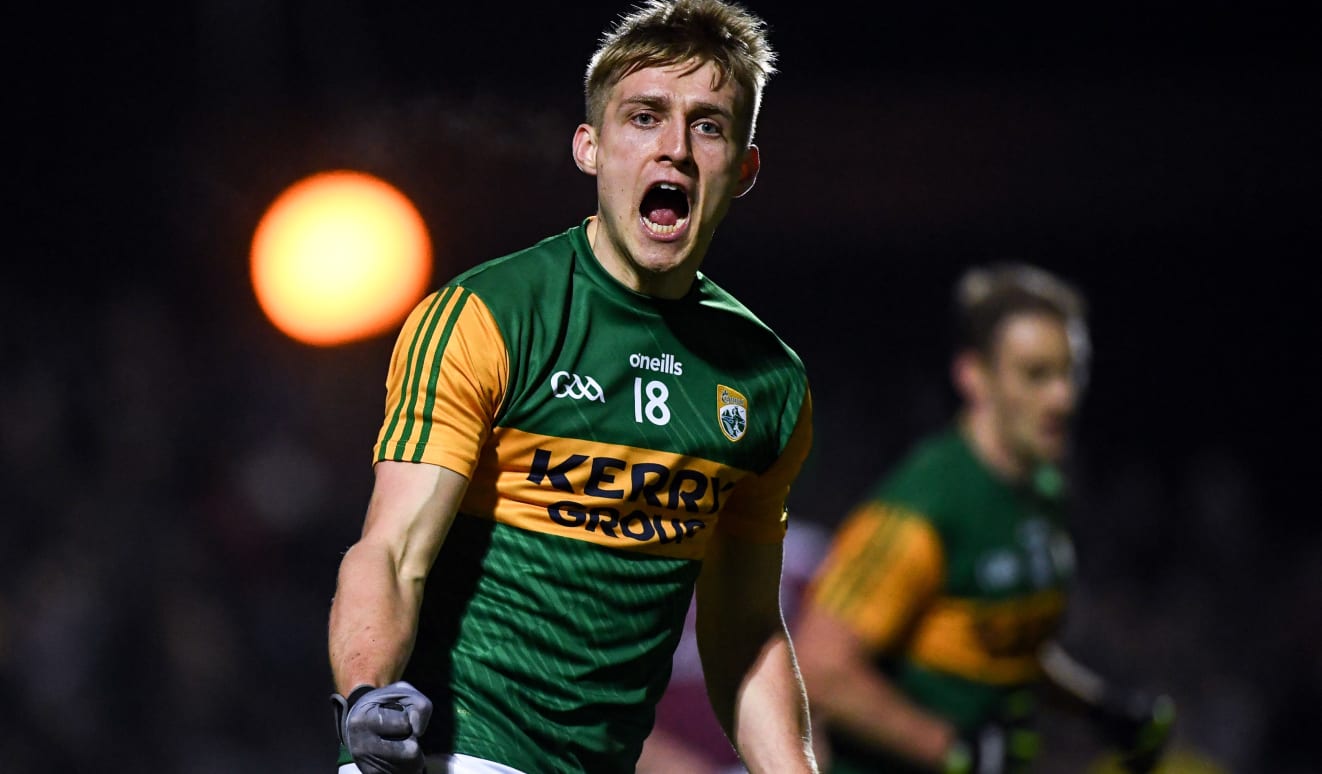 Kerry snatched a late and barely deserved victory over Galway in Tralee with a goal from Paul Geaney and a Killian Spillane point, both in additional time, to consign the visitors to their first League defeat under manager Padraic Joyce.

Shane Walsh's goal in the 58th minute - after defender Johnny Heaney had found the net in the first half - looked to have given Padraic Joyce's side their second win in as many weeks, but with Cillian McDaid going to the sin bin in the 63rd minute they couldn't close the deal against a gutsy, if wasteful, Kerry team.

McDaid was just preparing to come back on after his 10 minutes on the sideline when Geaney struck for Kerry's only goal in the 71st minute to level the contest, 1-14 to 2-11, and substitute Spillane nailed the winner three minutes later after David Clifford had hit the post with his effort.

It was a victory Kerry scarcely deserved, nor a defeat Galway deserved, and neither team could have had any complaints had they gone home with a point apiece.

The late withdrawal of Tadhg Morley and Sean O'Shea from the named Kerry starting certainly deprived the hosts of something crucial in defence and attack, but in Clifford and James O'Donoghue (in the first half) they just about had enough scores banked so that Geaney could strike late to rescue them.

Kerry settled into their work well, with Clifford opening the scoring after just 18 seconds, and when he clipped over a 20-metre free seven minutes later Kerry were 0-4 to 0-1 to the good, with Galway's point from Damien Comer, whose shot rose just over the bar.

Eamonn Brannigan cut the gap to two points in the 11th minute but Kerry extended their lead with excellent scores from Geaney (2) and Clifford to lead to 0-7 to 0-3.

Galway carried a strong scoring threat through that first half, though some poor execution saw them squander four very decent goal chances in the opening 36 minute.

Corner back Heaney did find the net in the 18th minute to get Galway back to within a point, and they trailed by two, 0-10 to 1-5, at the break with Shane Ryan making two smart saves to keep Kerry's noses in front.

Kerry were 0-13 to 1-7 clear by the 48th minute, but then Galway found their best form, driven on by the excellent Shane Walsh and points from McDaid, Walsh (free) and Eamonn Brannigan had them level by the 55th minute.

Clifford's free got Kerry in front again but then Tommy Walsh had a great goal chance saved and straight away Galway moved down the field for his namesake, Shane, to beat Ryan with a low shot to put Galway two ahead.

It looked like the Connacht men would hold on for the win but Kerry had other ideas; Geaney raised the green flag, Spillane raised the white flag, and Galway were beaten.