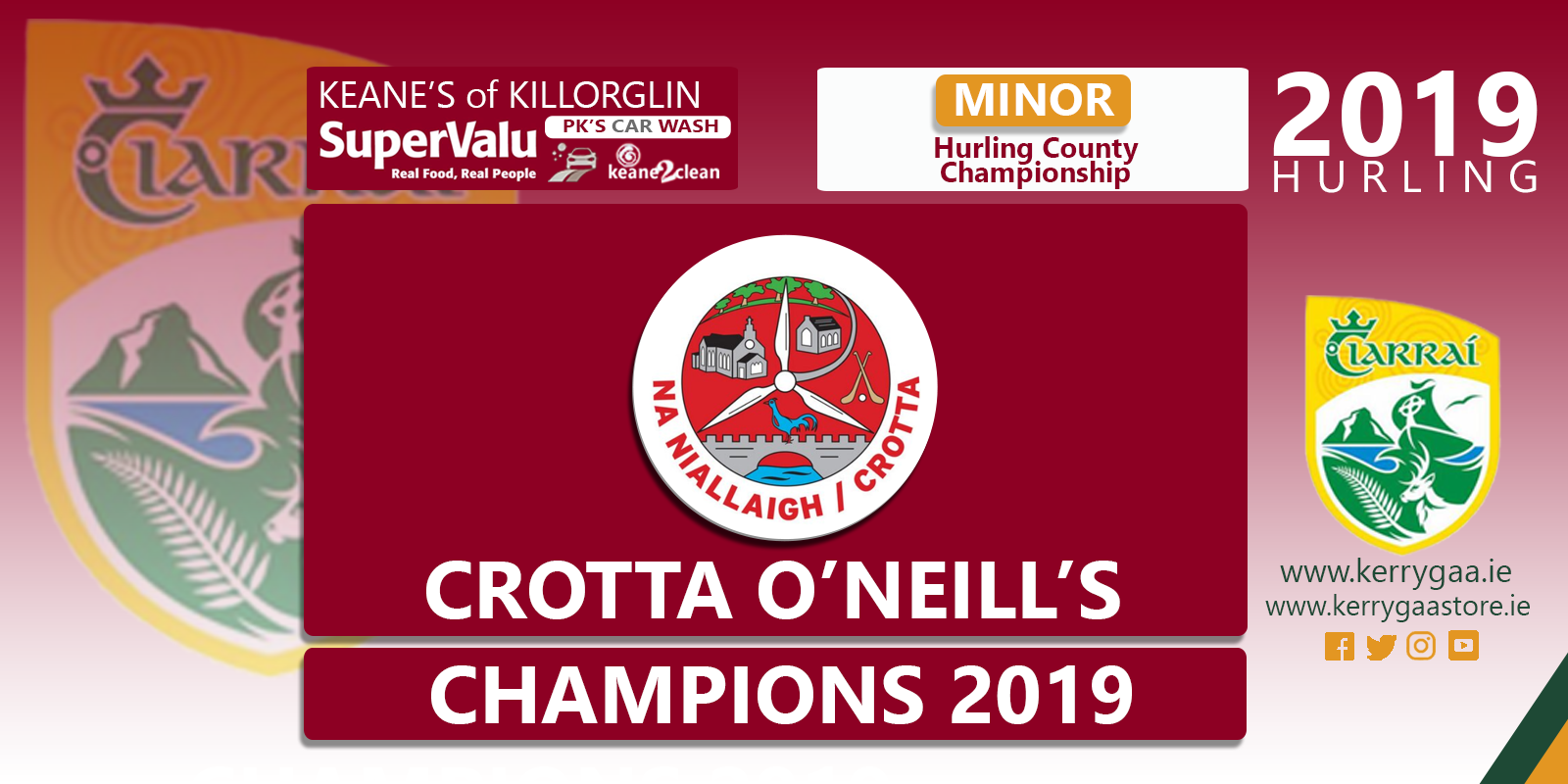 A goal by super sub Gavin Parker in the 63rd minute snatched victory from the jaws of defeat for Crotta O’Neill’s over a devastated Ballyduff side in this exciting County Minor Hurling Final, played at the Austin Stack Park on Sunday.

Crotta O’Neill’s are making a habit of winning county minor titles, as this is their third in the last four years, having won none before this current golden era at underage level. However they will be hoping that pick of these crop of minors will now go on and make the transition to the senior ranks because it will be fifty two years in 2020, since Crotta O’Neill’s last won the Senior Championship.

There is no doubt that Crotta O’Neill’s had good fortune on their side on Sunday but it’s the final result that counts not how you got there and to their credit the Crotta boys kept playing to the very end which ran to just over sixty six minutes.

Ballyduff will be devastated as they held a two point lead going into injury time and were caught napping for the goal brilliantly finished by Gavin Parker but at that stage, their goal mouth should have resembled a fortress with extra bodies back.

Overall Crotta O’Neill appeared to have the better team ethos and worked hard for each other while Ballyduff at times were guilty of individuals going it alone and ignoring a player in a better position.

From a neutral point of view it was a disappointing contest with Crotta O’Neill’s only managing 0-5 in the opening half while Ballyduff only managed 0-4 in the second period.

Dylan Moriarty opened Ballyduff’s account in the 1st minute when he converted a free but then he missed from long range as Ballyduff who started well with the wind, shot two wides.

Crotta were employing wing forwards Denis Quille and Tomás Dillon as extra defenders to keep an eye on the pacey Kevin Goulding and Paddy O’Rourke.

Rory Mahony levelled in the 6th minute when a Declan O’Donoghue free dropped short before Kevin Goulding was fouled as he raced through with goal on his mind and Dylan Moriarty restored Ballyduff’s lead.

Ballyduff then hit three points in a row from Kevin Goulding, Aidan O’Connor and Dylan Moriarty as they enjoyed a purple patch to lead 0-5 to 0-1 at the end of the opening quarter.

Crotta were defending well with Sean McGrath and Cillian Trant clearing their lines but it was their two wing backs that stood out, as both Denis Nolan and Aodhán Behan were first to every ball and supplied their attack with good ball.

Two points from Declan O’Donoghue closed the gap to two before Dylan Moriarty increased it to three in the 20th minute with a superb effort from play.

But after Behan had fired wide from long range in the 20th minute, his wingback team mate Denis Nolan made no mistake a minute later as Ballyduff were not working hard enough without the ball in the middle third.

Andrew Murphy and Rory Mahony swapped points but Crotta were getting stuck in and every Ballyduff score appeared hard won. Ballyduff finished the half the stronger with points from Dylan Moriarty (free) and shot from Adam Segal that was deflected over by Crotta keeper Darragh Murnane. Kevin Goulding then burst through and could have goaled or tapped over the bar but instead his shot under pressure was weak and Murnane cleared as Ballyduff retired 0-9 to 0-5 in front.

Crotta began the second period well with Rory Mahony having a goal chance and two quick points from O’Donoghue and Sean Murnane closed the gap to two.

Ballyduff who had lost nippy full forward Aidan O’Connor just before half time only managed one third quarter point from Dylan Moriarty and Eric Daly spurned a great goal chance which the keeper saved but again as things transpired, how important would a point have been?

Points from Denis Quille and Cillian Trant closed the gap to a point before points from Eric Daly and a Dylan Moriarty free pushed Ballyduff 0-12 to 0-9 clear with ten left.

Declan O’Donoghue converted a free and beat four defenders to score the point of the game but then missed the chance to equalize.

Then when Kevin Goulding extended Ballyduff’s lead to two entering injury time Crotta needed a goal   and they got it.  In 63rd minute a long ball looked to have taken a deflection off O’Donoghue’s hurley and it fell to substitute Gavin Parker who shot low to Ballyduff net thus snatching another County Minor title from the grasp of a luckless Ballyduff side.

Crotta O’Neill’s trainer Micheál Lynch while praising his own team for their never say die second half also felt that Ballyduff were unlucky not to get something from the game “We went in at half time four points down but we felt that we had not hurled at all in the first half as we had left Ballyduff dictate the terms of the game. So we asked the lads to throw the kitchen sink basically at it in the second half and they did. Although they brought it back to a point, they allowed it back up to three again and it would have been easy for them to drop the heads but they did not.  They kept fighting, we were missing chances. We were missing frees and we had chances for easy scores but we did not take them.  But there was a never say die attitude and young Gavin Parker kept his cool and stood up and was counted, taking his opportunity when it came and he got the goal that won the day”

“Its days like this that is the reason we are involved in sport because when you come out in the right end of them, they are fantastic days but you would have to feel for Ballyduff because they controlled the game for long periods but we kept with them, we kept fighting and we kept trying to find a way and in the end we did. But my heart goes out to Ballyduff as that was a game that probably should have ended in a draw which might have been fairer but we won it and today we are delighted to be county champions”

But Micheál believes that while minor success is great, it does not necessarily guarantee senior success and Crotta O’Neill’s have not won a senior championship since 1968 “ We would be hoping  that it would follow but there is an awful lot of hard work to do . Minor success is no guarantee of senior success but if the club structure is right at both underage and senior and fellows keep working hard, it should come. But the work has to be done, players have tune in to that. There are no short cuts and no guarantees and hard work is the only way will end over fifty years of waiting”