You are here: Home/ News/ Kerry Minors beaten in All Ireland Semi-Final 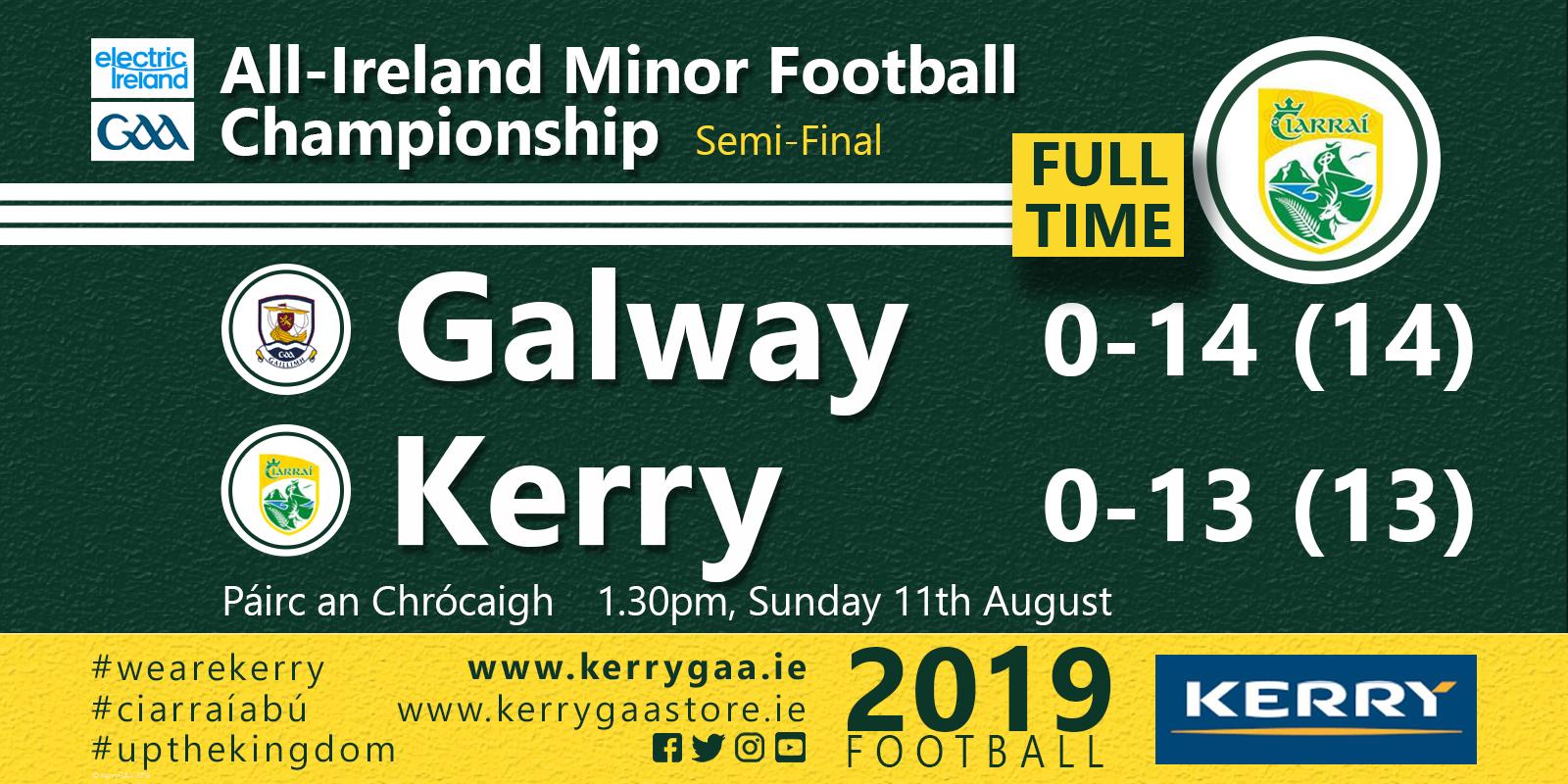 Kerry's five-year reign as Electric Ireland All-Ireland minor football champions is finally over but it took an almighty effort from Galway to dislodge them.

In what was a repeat of the 2018 final, Donal O Fatharta's outfit returned to haunt the Kingdom at the semi-final stage with a lion-heart display.

Tomo Culhane, part of that 2018 group, led the line superbly for Galway with six points though it was a strong defensive effort that ultimately got them over the line and into the September 1 final.

Kerry threw the kitchen sink at the young Tribesmen late on but were simply unable to conjure the scores to at least rescue a draw.

It means that after 34 wins in a row, a run that stretched back to the 2013 All-Ireland quarter-final against Tyrone, Kerry have finally been defeated at the minor grade.

As for Galway, they'll be back at Croke Park early next month for a final date with Cork, a side that ironically lost twice to Kerry in the Munster championship.

It was August 4, 2013, to be exact, when a Kerry minor side had previously lost a game and Galway fell foul of the Kingdom on two occasions during that run, in the 2016 and 2018 All-Ireland deciders.

Goalkeeper Donie Halleran and corner-forward Daniel Cox were the two Galway players in action today that also lined out in last year's final with Culhane coming on last year.

As for Kerry, Dylan Geaney was the only player who lined out in both games though Jack O'Connor, who started in attack this time, came on in their four-point 2018 final win.

Kerry clung to that record for dear life through the first-half as they racked up the wides and lagged behind the Connacht runners-up for the most part.

It wasn't that Kerry didn't have the chances but six first-half wides and three more efforts that dropped into the Galway goalkeeper's arms undermined their efforts.

Galway led 0-7 to 0-5 at the interval with Culhane scoring two of those points.

Kerry restarted with gusto and reeled over four points in just over two minutes to turn the game on its head.

Colin Crowley, Darragh Lynch, Geaney and O'Connor all split the posts and suddenly it was Kerry that led by two, 0-9 to 0-7.

But they didn't kick on from there as anticipated and missed chances - they hit 13 wides in total - will torment James Costello and his group of Kerry players.

Galway got back to level terms on three occasions before moving two points ahead late on through Culhane and Kennedy points.

Geaney clawed one back for Kerry to leave the minimum in it but Galway held on for a memorable win.