You are here: Home/ News/ Kerry Book Place in All Ireland Final 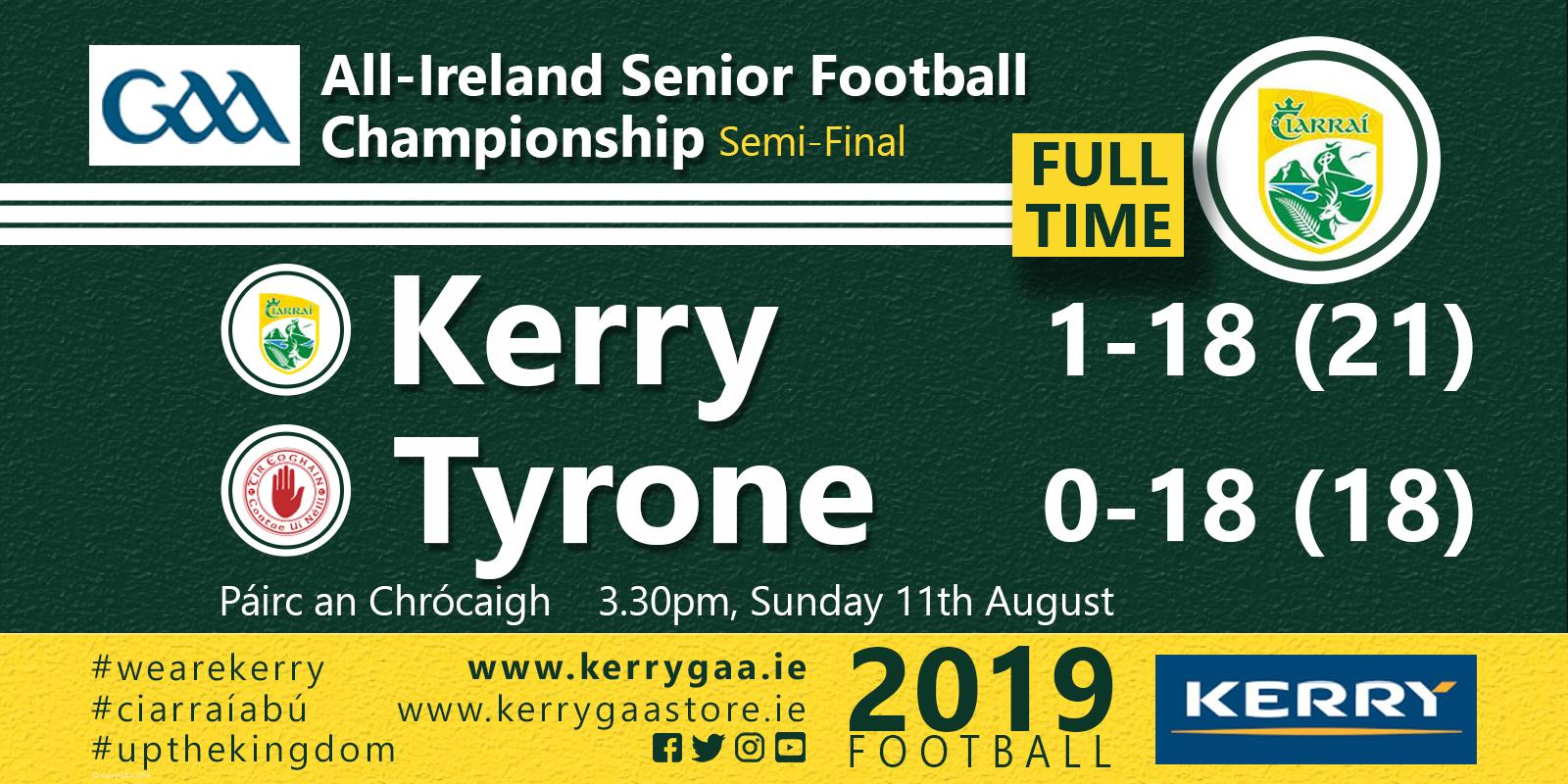 by Michael Devlin at Croke Park

Kerry will take their place in the All-Ireland final on September 1st after a stirring second half performance turned this afternoon’s semi-final encounter with Tyrone in their favour.

It was a classic game of two halves. Tyrone looked to have Kerry's number by the end of an opening 35 minutes that saw them carve out a four-point lead, largely through the influential Cathal McShane and Mattie Donnelly.

The duo were the chief protagonists in the Tyrone attack, and time and again were successfully located by accurate direct kick-passing that characterised Tyrone’s offensive approach.

Kerry meanwhile were not as penetrative in their own attack, and any sign of trepidation on the ball was pounced on for turnovers by a ravenous Tyrone defence.

Whatever Peter Keane communicated to his players at the break though seemed to jolt them into life, and their second half performance was a very different story.

The Kingdom emerged from the tunnel more energised, squeezing Tyrone across the pitch, and as spaces opened up, they were able to break through the resolute Tyrone rearguard and tag on the crucial scores that brought them back into the game, Stephen O'Brien's goal midway through the half the key moment of course.

After Michael McKernan clipped over the game's first score for Tyrone, Sean O'Shea levelled up from a free before McShane and Donnelly opened their accounts for the day. It was nip and tuck up to that first quarter, Niall Morgan's miscued kick out allowing Geaney to bring the sides level in the 11th minute before the Tyrone keeper made amends to split the posts from a '45 almost immediately after.

David Clifford languidly stroked over a score before Niall Sludden worked an angle at the other end to keep Tyrone edged in front. McShane was still revelling in the space being afforded by the Kerry defense, and the Owen Roes man sent over two points with Donnelly and Sludden chipping in as well as Tyrone looked full value for their four-point lead at halfway.

Kerry needed to change something, and their restart was defiant. The accuracy of O’Shea from frees helped them cut back the gap and Clifford conjured a roar from the Kerry crowd with a point in the 55th minute drew the sides level at 0-12 apiece. McShane was still operating effectively in full-forward at the other end, adding a few frees of his own while Connor McAliskey marked his introduction with a fine swerving point from the right wing.

Just after that Clifford score came the game’s turning point. Geaney did the spade work inside the 21-yard line, and O’Brien came storming through to collect a pass and fire past Morgan. The Kenmare man knocked over a point just after to put Kerry four up and motoring well.

Tyrone had their own attempt on goal just before the hour mark when McShane barrelled past Jason Foley to tee up the oncoming Peter Harte, but the palmed effort lacked the conviction to beat Shane Ryan.

From then on Kerry closed in on the final whistle with bristling confidence, holding any sort of a Tyrone fightback at bay while adding to the scoreboard through Clifford, Geaney and O’Brien.

The clinching moment came in the fifth of the six added minutes, when Fossa phenom Clifford somehow managed to arc a lofty right-footed effort between the posts despite being knocked off balance by Ronan McNamee. Nothing was going to go wrong for Kerry it seemed, and it didn’t. They will revisit Croker on September's first Sunday, with a view to calling a halt to the Dublin ‘drive-for-five’.