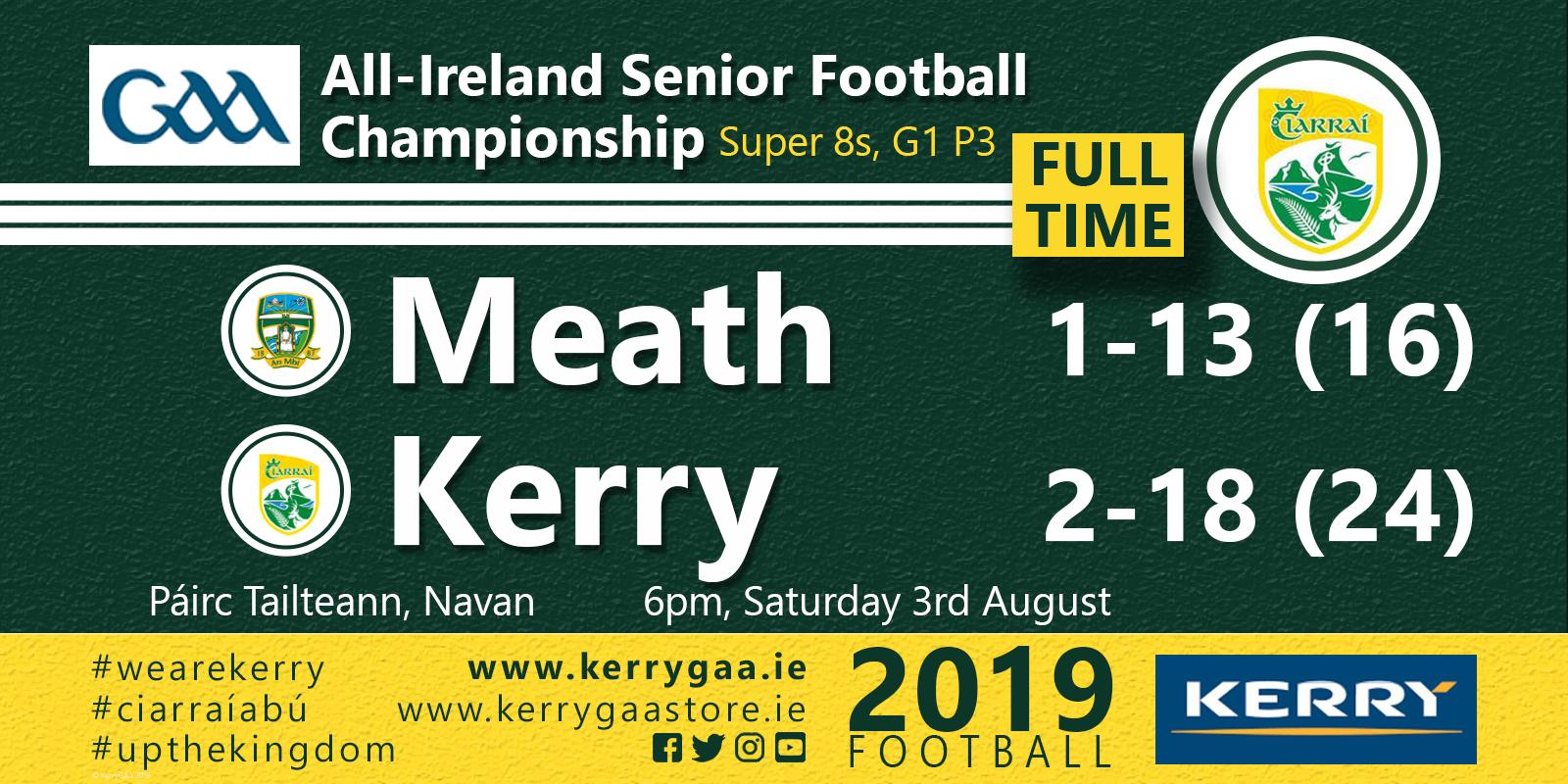 Kerry are through to next weekend's All-Ireland SFC semi-finals where they will play the losers of tomorrow’s quarter-final clash between Tyrone and Dublin.

They won by a comfortable margin in the end, but they had to work hard for the win in what was a very physical game of football.

As a contest it followed the same template of Meath’s prior defeats to Donegal and Mayo in the All-Ireland SFC Quarter-Final series.

The Royals were very competitive for 60 minutes, but faded coming down the stretch which can be probably be attributed to a lack of depth in their panel.

Kerry were able to bring on Dara Moynihan, Tommy Walsh, Jack Sherwood, Jonathan Lyne, and Jack Barry, but Meath had nothing like the same strength in reserve.

You couldn’t fault their attitude or application throughout this Quarter-Final series though, so they definitely have solid foundations to build on next year when they will also have the benefit of playing Division One Football.

As for Kerry, this was a solid, workmanlike victory, but it won’t have left defending All-Ireland champions Dublin quaking in their boots.

They led by 0-4 to 0-1 after the first seven minutes, and in that period scythed through the Meath defence all too easily when they brought the ball forward.

David Moran and Sean O’Shea were especially prominent early on for the Kingdom, scoring all of those four points, and recycling a lot of ball.

As the half progressed though and Meath started winning more primary possession, they grew more and more competitive.

Now we were finding out that Kerry looked just as uncomfortable when put on the back foot in the same way Meath had in the opening exchanges.

Shane Walsh and Thomas O’Reilly were proving to be effective target-men, while Cillian O’Connor, Ethan Devine, Bryan McMahon, and Darragh Campion had the legs on their markers when they ran the ball from deep.

Three points in a row from Walsh, O’Reilly, and Campion had Meath level at 0-5 apiece by the 13th minute, and now the home crowd were really involved in the match.

Kerry briefly silenced them though when Brian Ó Beaglaoich then scored the first goal of the match.

He did well to turn the ball over in the middle third and raced forward before playing a clever one-two with Paul Geaney before shooting to the net.

It was a fine score by Ó Beaglaoich, but really the Meath defence should have stopped him in his tracks somewhere along his journey to goal.

Meath were unfazed. Bryan McMahon kicked a nice point and then they scored a goal of their own.

Cillian O’Sullivan was the creator as he set off on a typically jet-heeled run before putting through Campion who showed a lot of composure to round Shane Ryan and then slot to the back of the net.

Kerry looked to be gaining the upper hand again near the end of the half when they scored three points in a row to move three ahead, but Meath rallied again in first-half injury time to reduce the deficit to just one.

And as they jogged to the dressing-room trailing by 1-10 to 1-9 after the half-time whistle blew they were given a rousing ovation by the home supporters who clearly felt a fancied Kerry team were looking a bit rattled.

The impressive Shane Walsh drew the home team level at the start of the second-half, but they then suffered a real body-blow when Kerry scored their second goal on 42 minutes.

It dispatched by Man of the Match, Sean O’Shea, who showed a clean pair of heels to Gavin McCoy out wide before racing towards goal and crashing the ball to the roof of the net from a tight angle.

Walsh hit back with a free almost immediately, but that’s as close as Meath would ever get to Kerry thereafter as their energy levels waned.

There were still just three points between the teams with ten minutes of normal time remaining, but that’s when Kerry really put their foot on the gas to leave Meath choking on their dust.

They scored six points to just one in replay down the home stretch, with the pick of them a beautifully flighted Sean O’Shea ’45 from near the right sideline.

Kerry won by a handsome margin in the end, but they’ll still have to find room for improvement if they’re to win an All-Ireland title this year.