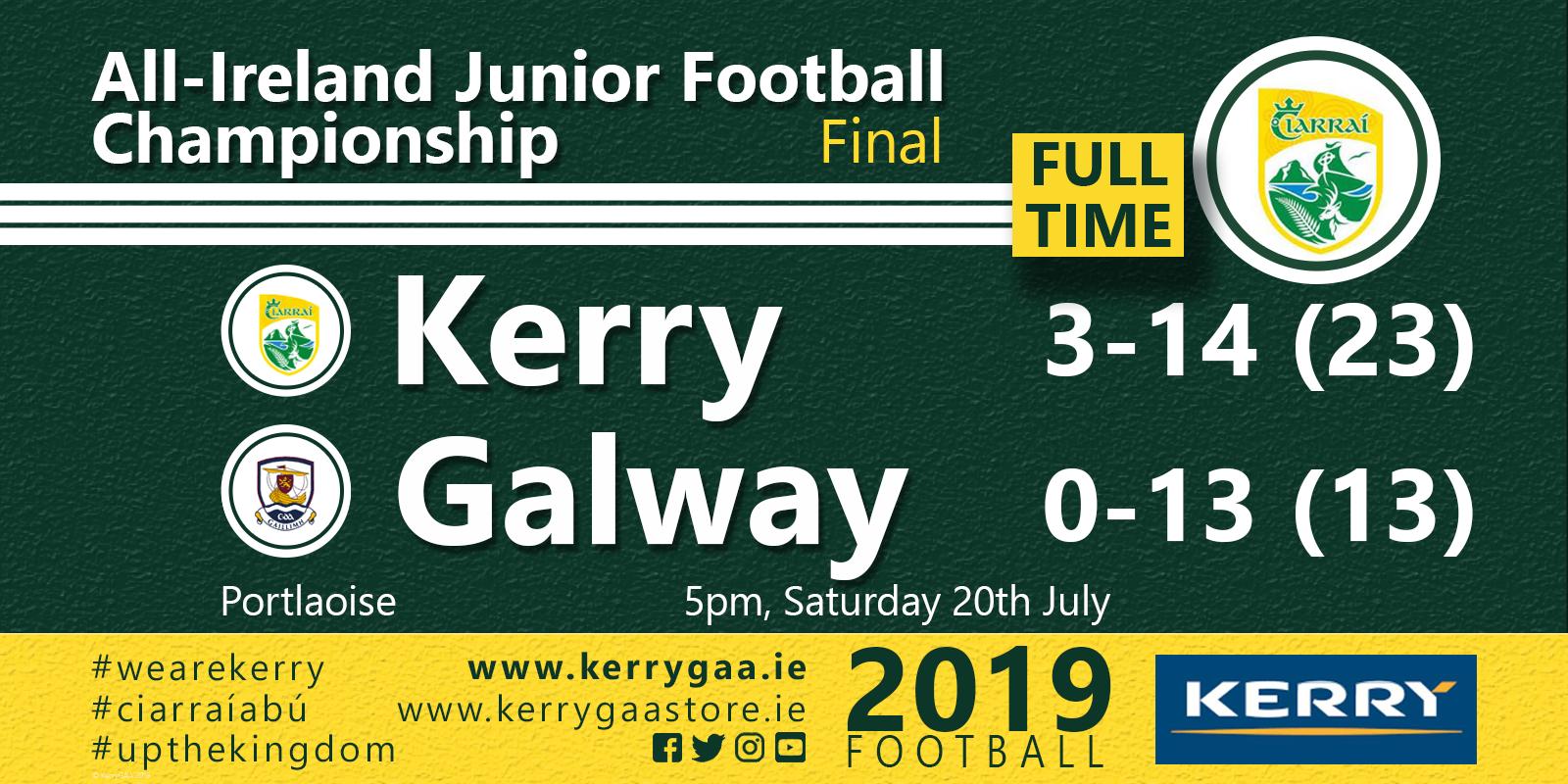 After completing an unprecedented four-in-a-row in 2018, the Kerry Junior footballers went a step further this evening completing an unrivalled five All-Ireland titles on the spin.

Three second half goals from the Kingdom courtesy of corner forwards Barry O’Dwyer and Stephen O’Sullivan along with substitute James Crean took the wind out of Galway’s sails as Kerry ran out for a convincing victory over a depleted western outfit in the decider.

The men in maroon started the game the brighter and on five separate first half occasions held the lead but each and every time they were pegged back by Jimmy Keane’s irrepressible men.

Williamstown’s Garry Kelly was his elusive best early on and finished the first half with five points, four from play, a couple of which were half goal chances that went array. Patrick O’Donnell the only other teammate to get on the scoresheet in the first half.

Kerry were slow to find their rhythm but when they did get into their grove they caused the Galway rearguard serious issues with six different first half scorers in Daniel Daly, Stephen O’Sullivan, ‘keeper Eoghan O’Brien from placed balls and marauding wing-back duo of Jack Brosnan and Michael Foley.

O’Brien and his opposite number Cormac Haslam were called into action throughout the first half and both pulled off stunning saves to deny the opposition full-forwards Colm Brennan, who was a real handful early doors, and Daniel Daly who used his quick thinking from a free to call the Glenamaddy netminder into action.

Kerry’s late burst left them two points to the good at the interval, 0-8 to 0-6.

Matt Duggan’s troops had pegged Kerry back by the 33rd minute through scores from Kelly and Sean Ó Currin but Kerry’s three goal salvo ensured there was no way back.

Barry O’Dwyer fisted to the back of the net on the 34th minute and six minute later the exceptional Stephen O’Sullivan put the game beyond all doubt with their second.

Galway continued to toil hard but a professional and clinical Kerry kept them at arm’s length and repelled their advances.

James Crean finished off his side’s third goal with three minutes remaining to ensure the All-Ireland Junior Cup would be heading back to Kerry for the the 20th time.