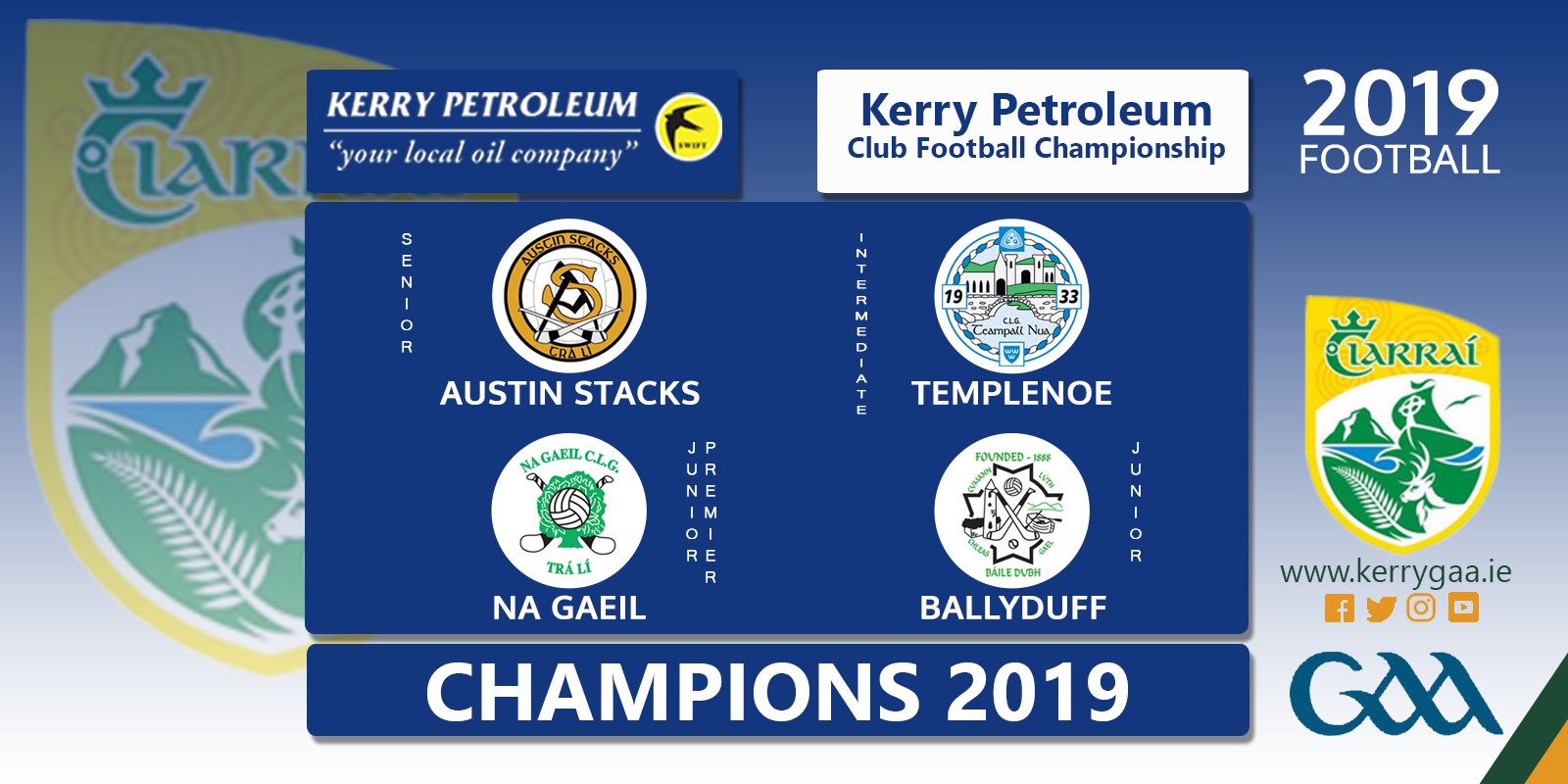 Templenoe too strong for An Ghaeltacht in Inter decider

By Murt Murphy at the Austin Stack Park

Templenoe powered by the Spillane brother Killian and Adrian, along with the Crowley twins Gavin and Brian and outstanding fullback Tadgh Morley put a below par An Ghaeltacht side to the sword in this one sided County Intermediate Club Final, played at the Austin Stack Park on Sunday afternoon.

Templenoe dominated from the throw-in and in fact within 15 seconds Kian Hallissey finished to An Ghaeltacht’s net and this ensured that An Ghaeltacht was on the back foot from early on.

Templenoe were dominant in all sectors with wing-backs Gavin Crowley and Patrick Clifford along with Adrian Spillane driving forward and their pacey attack were shredding an overworked An Ghaeltacht defence.

Killian Spillane added two first-quarter points while Stephen O’Sullivan converted two frees and Brian Crowley made it 1-5 to no score at the end of the opening quarter, with An Ghaeltacht kicking three wides. They can thank their keeper Tomas Mac an tSaoir making two magnificent saves to deny Josh Crowley Holland and Stephen O’Sullivan goals for being still in the contest.

An Ghaeltacht did improve in the second quarter with Eanna O’Conchuir their best player by a distance and Rob Ó Sé winning good ball at midfield and the introduction of PJ Mac Láimh also made a difference, but they had five wides on the board before Mac Láimh opened their account in the 24th minute. Óigí Ó Sé added another while the reliable Sean M O’Conchuir converted two frees and one from play to leave Templenoe leading by eight at half-time, 2-7 to 0-5 and they had a mountain to climb.

Templenoe were relentless in the second half they defended in numbers as Eanna Ó Conchúir and Pádraig Óg Ó Sé tried to rally An Ghaeltacht but Templenoe were deadly on the counter with Killian Spillane five second half points (four from play), Brian Crowley was denied goals on two occasions by the brilliance of Mac an tSaoir.

Pat Spillane scored a point that his dad would have been proud off, and despite three late An Ghaeltacht points, they were a well beaten side long before the end. Templenoe will now look forward to playing in SFC in 2020 plus a Munster and probable All Ireland Club campaign in the autumn.

Templenoe Manager John Rice was thrilled afterwards “This is as serious side with serious talent and you can see that any small club from our area at senior level is struggling for numbers. We had twenty six togged out today and that was everybody. It’s a small rural parish and that commitment from the fact that these lads came up together because down in South Kerry there is nothing else to do but play football. They are all from football families, the Spillane’s, Hallissey’s, Crowley’s and Rice’s and they are all the older people in the club and it is great to see the next generation coming along. Look it’s a once in a lifetime generation and we will enjoy this while we can. We are a senior club now next year and we will give that a rattle and let things take care of themselves after that”

Fourteen-man Na Gaeil made up for suffering the heartbreak of having lost two of the last four Kerry Junior Premier Finals when they defeated St Senan’s in a one-sided encounter at Austin Stack Park on Sunday afternoon.

Na Gaeil’s inter-county pairing of Jack Barry and Diarmuid O’Connor, who scored 2-3 between them, gave the Tralee side the early advantage with O’Connor scoring a spectacular goal in the 10th minute when he raced through from midfield and gave St Senan’s keeper James Barry no chance.

St Senan’s fought back with points from Conor Kennelly and Donal Hunt but in the 15th minute Jack Barry raced through the heart of the St Senan’s defence before parting to Jamie Lowham who left Na Gaeil 2-3 to 0-3 in front.

However, St Senan’s began to win breaking ball at midfield and they struck for a crucial goal in the 17th minute when Jason Browne found the net after Na Gaeil’s keeper had come off his line. Then when Conor Kennelly quickly added a point just two points separated the sides but two points from Darragh Devine saw Na Gaeil move four clear before Paudie Quill converted a free to leave just a goal between the sides.

Then on the stroke of half-time after a clash near the St Senan’s goalmouth referee James O’Sullivan red carded Na Gaeil’s wing-back Kieran O’Donovan but Na Gaeil had the final say of the half when Jack Barry raced through and his scuffed effort finished up in the St Senan’s net to leave Na Gaeil 3-5 to 1-5 in front, proving the crucial score of the game.

Na Gaeil had the aid of the breeze for the second half and once Diarmuid O’Connor, Jack Barry and Mike Griffin (2) added four points without reply there was going to be only one winner. In fact Na Gaeil with Mike Griffin and Dan Goggin working hard in attack and Jack Barry a powerhouse art both ends, it was always comfortable for the Tralee side that had  Ryan O’Neill and Damien Burke playing superbly at corner back against a team coached by his Dad Mark.

St Senan’s were not at the races despite the best efforts of Sean Weir, Sean T Dillon and David Foran  but they had no answer to the power and poise of Donal Rooney’s Na Gaeil side, were ending four years of near misses, with  Jack Barry, being joined by his brothers Andrew and teenager Fergal.

The unbridled explosion of emotion at the final whistle among Na Gaeil players and management was a mixture of joy and relief that they had finally delivered a county title after being so close in recent years. This was their third final in four years, losing to Glenbeigh/Glencar after a reply and last year by a point after extra time. So for Manager Donal Rooney it was relief to lose the “nearly “ tag

“We are thrilled with the win because it has been a long four years I suppose when we started we were only trying to get up through the divisions and then the last few years we have been searching for the Holy Grail, in trying to win this Junior Premier Championship. I am just delighted today that we got over the line”

Were you happy going in at half time after losing a man and Jack Barry getting that goal ,did you think six points was enough “ I wasn’t that happy at half time to be honest even if Jack’s goal put us six up because we certainly had not played well by any means. It showed tremendous character from Jack to come up with that goal after the sending off and that’s what great leaders do. It gave us a cushion but we had not played that well so it was crucial that we had that cushion in case they got a goal. “

Rooney believes that the experience or hurt at losing in previous years helped the team as they improved in the second half and never allowed St Senans get close “I suppose most of the lads have been around for the last four years and had played in at least three county finals so we had other players who stepped up. Last week we were missing Jack but Dan O’Connor had a great game in the middle of the field for us. We have been missing players all year but we have a panel of nearly forty and we will need all them over the next few months in the league”

Never say die Ballyduff whose DNA screams hurling, produced yet another master class in wining against the odds, when coming from behind to mug the Killian Young led Renard in the County Junior Club Football final, played at the JP O’Sullivan Park Killorglin on Saturday evening.

In fact, Ballyduff  only led for the first time in the first minute of injury time, as they completed an amazing six weeks of “football focus” for the predominantly hurling club,  when Kerry senior hurler Padraig Boyle scored the second of his two goals that ensured they overcame the challenge from a vibrant and very good  Renard side.

The talented South Kerry side scored the first four points of the game before Ballyduff got on the scoreboard in the 12th minute as Young’s personal duel with Mikey Boyle was one of the highlights of the first period. Six points from the impressive Dara Fitzgerald came in the first period as they led by 0-7 to 0-2 approaching the final 10 minutes of the half. Ballyduff found scores a bit easier before half-time however, as they only trailed by 0-8 to 0-6 at the break.

Former Kerry underage and rugby star Robert Wharton was powering forward for Renard as Alan Curran impressed defensively as a lead of 0-12 to 0-7 after 49 minutes, suggested they had found a way to deal with Ballyduff’s physicality.

However just like the semi-final the introduction  of a third Boyle brother, Aidan, proved  crucial however as two high and direct balls into his grasp in the full-forward  position led to their goals, the first for  brother Padraig in the 54th minute making it 0-12 to 1-8.

Renard captain Brian Sugrue went off injured four minutes later following a hefty hit as the momentum was really with Ballyduff at this stage. Padraig Boyle followed up his second goal with a third point for himself to finish with 2-3 as Padraig Walsh was black carded for a foul on Young late on.

The South Kerry side will wonder on how they became the latest side to fall victim to Ballyduff’s never say die spirit as an amazing campaign has seen them come through titanic struggles with both Cromane and Annascaul. It was also a first Kerry Football title for the club since they won the Novice Championship back in 1991 and remember they play in Div.5 of the County League.

But for Mikey and Padraig Boyle, Jack Goulding, Daniel O’Carroll Eoin Ross, Paud Costelloe and Philip Lucid its Antrim on Saturday next  for Kerry in the Joe McDonagh Cup