You are here: Home/ News/ Curtain comes down on Kerry Petroleum Club Championships 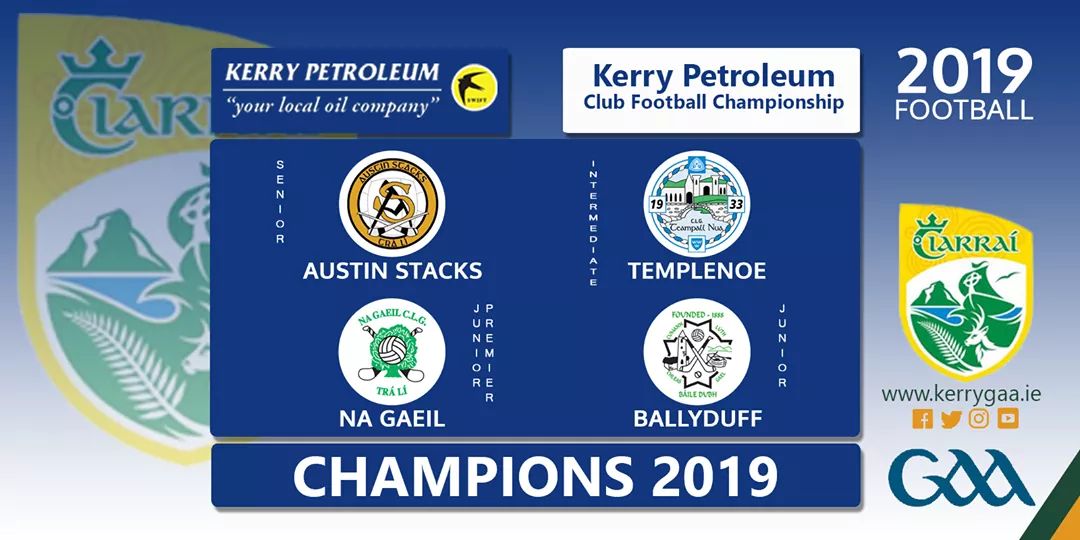 The Curtain Comes Down on the Kerry Petroleum Club Championships!

First up on Saturday night was the meeting of Ballyduff and Renard in the JP O’Sullivan Park, Killorglin. Renard held the lead right up until 5 minutes before the full-time whistle but 2 goals in quick succession from Ballyduff ensured the Cup was going North for 2019. The game finished Ballyduff 2-9, Renard 0-12. Vice Chairman Diarmuid Ó Sé presented the Cup to winning captain Paul O’Carroll. Mike Tangney from Kerry Petroleum presented goal scorer Pádraig Boyle with the Man of the Match trophy!

The second game was a much-anticipated Intermediate Final between Templenoe and An Ghaeltacht, two teams who are very familiar with each other! Within seconds of the throw in, Cian Hallissey netted the ball giving Templenoe the dream start! Their second goal came minutes before the half time whistle giving Templenoe a half time lead of 2-7 to An Ghaeltacht’s 0-5.  The men from the west rallied hard in the second half but Templenoe never relinquished their commanding lead. The game finished Templenoe 2-14, An Ghaeltacht 0-12. The Chairman presented the winning captain Brian Crowley with the Cup and Templenoe’s Killian Spilliane was named as Man of the Match.

The two relegation finals were also played. Castleisland Desmonds prevailed over Brosna on a scoreline of 3-15 to 1-12 which secures their Intermediate status for 2020. In Cromane, Skellig Rangers beat Lispole 4-16 to 0-7 securing their Junior Premier status for 2020. Commiserations to Brosna and Lispole.

Next weekend we return to Credit Union County League action with Round 3 fixtures. A full list of updated fixtures are available on the Kerry GAA website.