You are here: Home/ News/ Lightning Strikes Twice for Spa 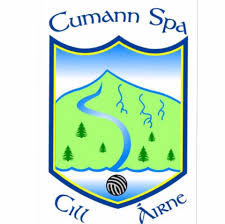 It was certainly a case of déjà vu for Michael Cronin chairperson of Spa GAA who for the second year in a row made the short journey to Aherns Castleisland’s state of the art premises to take collection of their new car.

The car was the top prize in the annual Kerry GAA Draw and vice chairperson of the Kerry County Board Diarmuid O’Se was on hand to present the keys in the company of Tom Keane treasurer Kerry GAA and Joe Wallace from the Kerry GAA draw committee.

Michael along with Mags Brosnan of the Spa club were dispatched to collect their prize and they were more than thrilled. “We are absolutely delighted, we never expected to be back here again. It means a lot to the club as things are very expensive and it takes a lot to keep clubs running”.

Something that vice chairperson of the Kerry County Board Diarmuid O’Se also echoed. “It is great to see a club winning it. Clubs have to raise a lot of finances and the further up the leagues you are like Spa in Division 1, it can be very costly. This prize will mean a lot to them and were delighted about that”