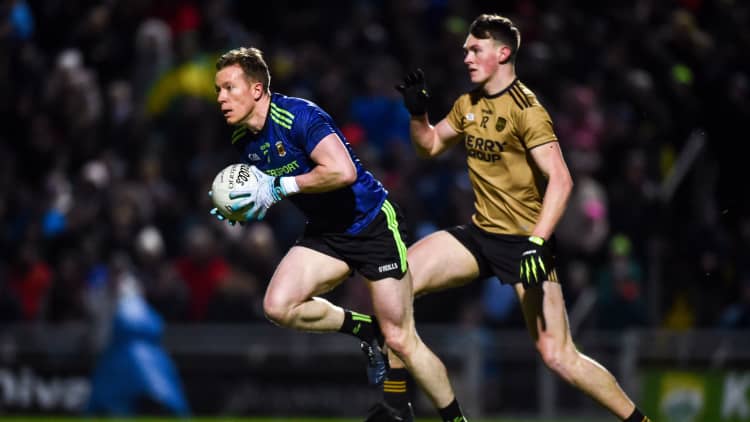 Matthew Ruane was the hero for Mayo in Tralee hammering home a 67th minute goal to give James Horan’s side their fourth league win of the season and bring to an end Kerry’s unbeaten start to the campaign.

Mayo had to come back from three points down at the break. They did have the aid of a gale at their back in the second-half, but they made hard work of it at times.

It took the hosts 20 odd minutes to get to grips with the game and the conditions in Tralee, but once they did they were able to put themselves into a deserved three point lead at the break.

Sean O’Shea was the main man on the scoreboard in the opening 35 minutes kicking four of Kerry’s seven points, with Kevin McCarthy chipping in with two of his own and Tommy Walsh slipping over a mark.

Mayo started the game brightly and were three points to the good inside the opening seven minutes, with Kevin McLoughlin opening the scoring followed by a Matthew Ruane effort after a strong run and a Jason Doherty effort from out on the right.

Kerry got things going on their scoreboard with Sean O’Shea pointing eight minutes in from play and following that up with a free dispatched with ease just before the quarter of an hour mark.

McLoughlin put two between the teams again with a neatly taken score on 18 minutes, but from then on in Kerry took control of the action for the rest of the half.

Kevin McCarthy drove over a point on 20 minutes followed by O’Shea’s third to level the game up two minutes later. Tommy Walsh pointed a mark to put Kerry in front for the first time and they added on two more scores from O’Shea and McCarthy to go in leading 0-7 to 0-4 at the half time whistle.

Kevin McLoughlin cut the gap to back to two points inside the opening minute of the second half, but Mayo went on to miss a number of good chances to close in the gap, including a goal chance for Ruane which was well saved by Brian Kelly.

Kerry managed to push themselves back into a three point lead when sub Diarmuid O’Connor pointed on the run 50 minutes in, but from then on Mayo took over.

The big moment of the game arrived three minutes from time, when Ruane was found in oceans of space down the left hand side of the ground by Kevin McLoughlin and he kept his cool to slot the ball under Kelly and put Mayo four clear.

There were six minutes of injury time to be played and Kerry hit back with an O’Shea free and a point from James O’Donoghue, but Mayo held on to pick up the points and win number four in the league this season.