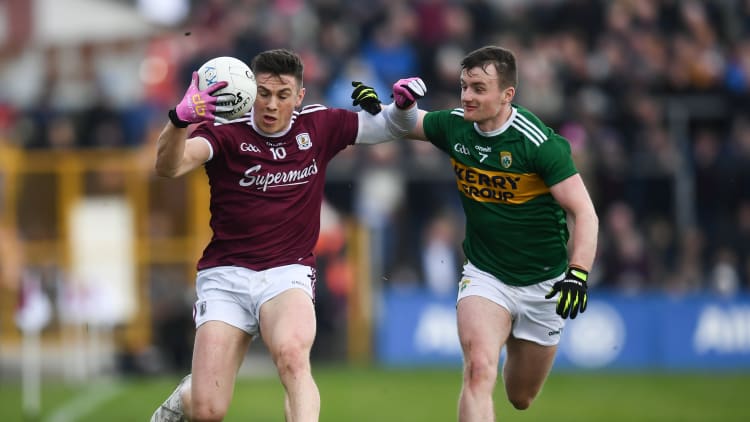 By Cian O'Connell at Tuam Stadium

A Kerry footballing year is never going to be defined in February, but the spring signs are favourable for Peter Keane’s developing outfit.

Four Allianz Leagues wins on the spin have been chalked up by Kerry, who ultimately prevailed after a splendid late cameo from substitute Tomás O’Sé edged them over the line in the west.

Galway had come thundering back from five behind to lead when Danny Cummins fisted an opportunistic goal.

Kerry, though, remained ice cool in the dying embers as Sean O’Shea levelled from a free before the delightful, dancing feet of O’Sé nudged the visitors ahead.

Backed by a passionate travelling support Kerry enjoyed a productive opening period departing at the interval armed with a 0-8 to 0-3 advantage.

That was chiefly due to a burst in the closing seven minutes of the half while Barry McHugh was in the sin bin as Kerry pulled five clear.

There was plenty to admire during that Kerry burst as Peter Keane’s hard working forced turnovers and were keen to break at speed.

While Kerry demonstrated fire and fury poise was evident too with Sean O’Shea landing four first half points as Galway were put under severe pressure.

Initially Galway were efficient and when Michael Daly rifled over a sweet 26th minute effort the teams were trading at parity, 0-3 each.

Stephen O’Brien, who had been black carded returned to the action as McHugh left for 10 minutes and Kerry made the numerical superiority count.

Galway, though, were much improved with McHugh prominent as Kevin Walsh’s outfit clipped six of the next nine scores narrowing the deficit to two.

In the 65th minute a Heaney delivery caused panic and Cummins grabbed a goal for Galway, who took a surprise lead.

Then O’Sé assumed centre stage and while Stephen O’Brien was sent off for a yellow card after picking up an earlier black it didn’t matter. Kerry took the spoils and the massive visiting contingent left Tuam content.