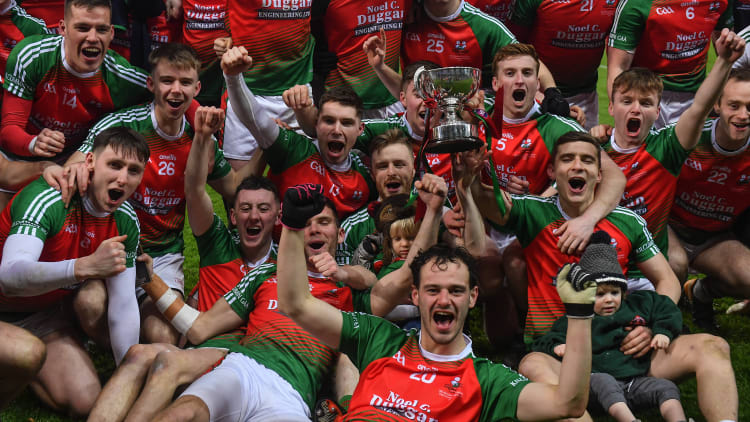 The Kerry county footballer scored an incredible 3-7 from play and absolutely tore the Antrim club’s defence to ribbons with his pace, strength, and deadly finishing.

His performance was all the more admirable considering he was a major injury doubt before the match having broken his hand in the Munster Club Final.

McCarthy was the name on everyone’s lips afterwards, but this was very much a consummate team performance by Kilcummin.

They physically dominated a younger Naomh Éanna outfit, and all of their players displayed the sort of ease in possession and mastery of the basic skills you associate with Kerry teams.

McCarthy’s first goal of the match came after seven minutes and put Kilcummin 2-3 to 0-0 ahead and seemingly in complete control at that juncture of the match.

But, credit to Naomh Éanna, they showed a lot of guts to overcome that early adversity and steadily played their way into the match.

Classy full-forward Odhran Eastwood cored two nice points to give their vocal supporters something to really shout about, and then they were on their feet when corner-forward Eoin Nagle smashed a brilliant shot to the corner of Brendan Kealy’s net.

The nine-point deficit had been reduced to just two, but then Naomh Éanna suffered a triple blow that probably caused them fatal damage.

Goalkeeper Paddy Flood conceded a penalty and was black-carded for hauling down Kilcummin’s Noel Duggan, and in the same sequence of play Naomh Éanna wing-back Conor McAuley sustained what looked like a bad ankle injury.

The game was held up for seven minutes while he was attended to and taken from the field, and when Kilcummin’s Kieran Murphy was finally given the green-light to take the kick he thumped it to the back of the net.

The Kerry side led by 3-6 to 2-4 at half-time, and in the second half they steadily pulled clear of Naomh Éanna.

They were dominant right down the middle of the pitch. Chris O’Leary was solid at centre-back, Kieran Murphy and Kevin Gorman lorded the midfield, Gary O’Leary was a clever presence at centre-forward, and McCarthy simply went to town at full-forward.

Kilcummin hit the first four points of the second-half before Naomh Éanna briefly threatened a comeback with a salvo of three of their own.

But the result was never in doubt as soon as McCarthy struck for his team’s fourth goal to push them 4-11 to 2-8 ahead.

From there they coasted to the finish, and McCarthy added one last exclamation mark to his dramatic display with another smashing goal in injury-time.

The better team won, but you get the feeling that Naomh Éanna’s talented young team will have learned a lot from this experience that will stand to them in the future.