A win for Kerry Footballers over Tyrone in AFL Round 1

You are here: Home/ News/ A win for Kerry Footballers over Tyrone in AFL Round 1

A win for Kerry Footballers over Tyrone in AFL Round 1 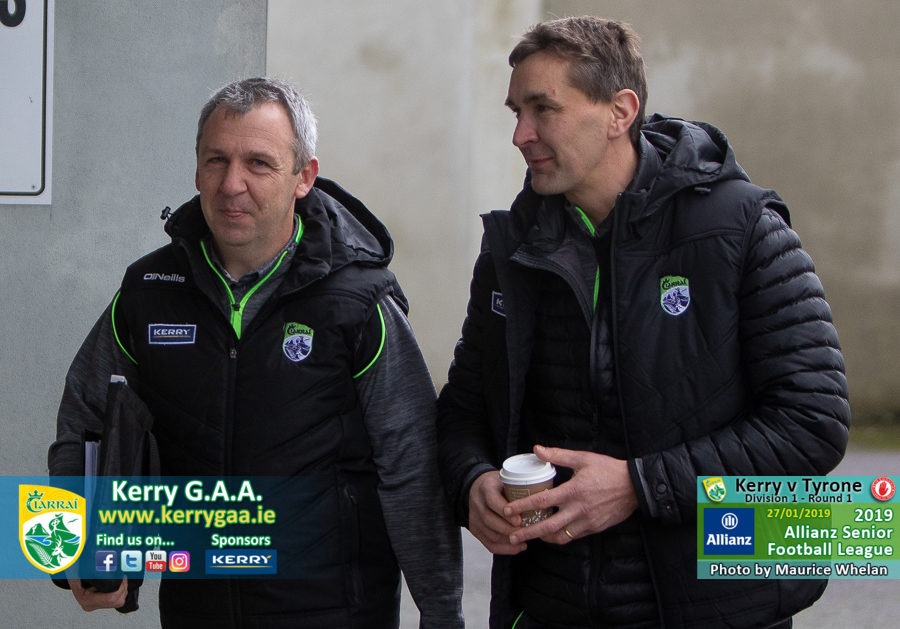 It was a rare opening day win for Kerry in the League and an important one for new manager Peter Keane who, despite playing down this four-point win over Tyrone, still acknowledged that it was nicer to win games than lose them.

Kerry beat last year's All-Ireland finalists with a performance that was more steel and style, which will suit Keane just fine.

It was a grim, dank day in Killarney, which was the perfect backdrop for the football produced here, but there was plenty for Keane, his players and the critics in the 12,921 crowd to be encouraged about. Steeling the Kerry defence was always going to be an immediate priority for this new management team so restricting Tyrone to two points from play and not a single meaningful strike on Shane Ryan's goal will be especially pleasing.

Indeed, individually and collectively Kerry gave Tyrone a good dose of their own medicine in that department, with plenty of bodies back in defence to choke up and stifle most Tyrone attacks. The aesthetics of the game suffered as a result but Keane, like Mickey Harte, is a pragmatic manager, and he will win ugly every day of the week.

The first half was turgid stuff, and it said much about the first half that the biggest talking point from the opening 35 minutes was Stephen O'Brien's miss in the 18th minute. A fine turnover in the middle of the field by the excellent Tom O'Sullivan put his team mate in the clear from 45 metres out but O'Brien dragged his shot wide from only 15 metres out and only Niall Morgan to beat in the Tyrone goal.

That chance came with Kerry ahead by the game's only score at that stage - a Sean O'Shea free after ten minutes - and it was 21 minutes before another O'Shea free doubled Kerry's lead.

Morgan converted a long-range free to get Tyrone on the scoreboard after 27 minutes but it was the 34th minute before the first score from play arrived. That came from the excellent Dara Moynihan, making an impressive senior debut, and two minutes later he slipped another shot over the bar to put Kerry 0-5 to 0-1 ahead at the break.

Three Darren McCurry frees made it 0-6 to 0-4 but Kerry were able to find ways through the traffic to pick off scores from O'Sullivan, Jack Barry and Mikey Geaney to keep three points between the teams and send Tyrone into needing a goal territory.

Mattie Donnelly's 64th minute point made it a two-point game but O'Shea brilliantly converted a sideline kick to make it 0-10 to 0-7 and converted his fourth free with the game's last kick to hand Kerry a deserved win, and send them up to Cavan next weekend already on the front foot.