You are here: Home/ News/ Pa Kelly Announces His Retirement 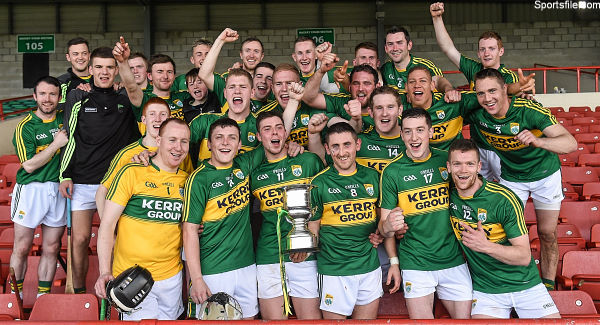 It's with a heavy heart that I announce my retirement from inter county hurling with Kerry. To play at this level requires 100% dedication, but unfortunately I could not keep up with the demands to play at this high level.

I would like to thank Fintan O'Connor and his management team in their support of my decision. I would also like to thank Ger McCarthy, Paudie Dineen, John Joe Carroll and everybody in the Kerry County Board who have supported me and who have helped me to play for Kerry over the last 4 and half years, along with providing assistance for the players whenever we had asked. I would also like to thank Eamon Kelly who 1st gave me the opportunity to play for The Kingdom.

I would like to thank my club Clarecastle. Without their understanding and well wishes I wouldn't have been able to play for both teams. I would also like to recognise the continued backing from the staff and students of Scoil Pol throughout my Kerry journey.

I would like to thank my family, girlfriend Claire and friends for their unwavering support throughout my time with Kerry. Their support and passion for the green and gold was a contributing factor for us being so successful, which cumulated in us gaining promotion to the Division 1 Hurling and been crowned Christy Ring Champions in 2015.

Finally, to the players who accepted me as one of their own. It was a privilege to dawn the green and gold with ye, and I will be forever indebted to you all for the manner in which you've treated me. I wish Kerry hurling all the best in 2019, and I hope to be in Croke Park in July seeing Martin Stackpoole lift the Joe McDonagh cup.

On behalf of Kerry GAA I wish to thank Pa Kelly for his excellent contribution and commitment to Kerry GAA over the last four years. Having an experienced and successful player such as Pa on our squad was invaluable. He played a huge role in our 2 league title wins and also in the Christy Ring Championship. We were delighted to have Pa involved with Kerry GAA. We congratulate Pa on his retirement and wish Pa and Claire all the best for the future.

I would like to congratulate Pa Kelly on his retirement. We are all disappointed in Kerry to lose Pa as he was an exceptional member of the squad, both as a player and an inspirational figure behind the scenes. Having had such great experience, Pa was able to share his knowledge particularly with the younger members of the squad and they are better because of it.

Pa has left the set up but given his great contribution to hurling in Kerry, he will always remain an 'honorary Kerryman'

I wish Pa, Claire and all his family every good wish for the future.

Congratulations to Pa Kelly on his retirement. The minute he put on a Kerry jersey, he became a true Kerry man showing great loyalty to the county. He made a great contribution and it is appreciated by us all in Kerry GAA. Best wishes to Pa for the future.

The arrival of Pa Kelly to Kerry hurling was a big step forward for Kerry hurling in 2014 under manager Eamon Kelly Pa having won an All Ireland with Clare in 2013 he brought experience and leadership to the dressing room and pitch on both training and match days. His commitment to the team and panel was beyond imagination along with his advice to the younger players on the panel to reach their full potential which coming from an All Ireland medal holder was massive. His contribution to two league titles in 2014 and 2015 also adding a Christy Ring title also in 2015 but certainly his proudest moment was getting promoted to play Division 1B league hurling in 2016. I take this opportunity to thank Pa for his commitment to Kerry hurling,  he was a gentleman to work with and honest during my time as hurling officer. Pa you made friends for life from the moment you first wore the Kerry Jersey no doubt in the near future you will play a part in the continuing the on going work to progress Kerry hurling. To your mother and father and girlfriend Claire I thank ye for yer friendship and support of Kerry hurling over the last four and a half years. I wish you a very happy retirement from Inter County hurling and all the best with your club Clarecastle. Enjoy bud!

"The harder the battle
The sweeter the victory (that was Pa )
Trophies gather dust
Memories last for ever.
Thanks Pa it was a pleasure"