You are here: Home/ News/ Secretary's Report to Convention 2018 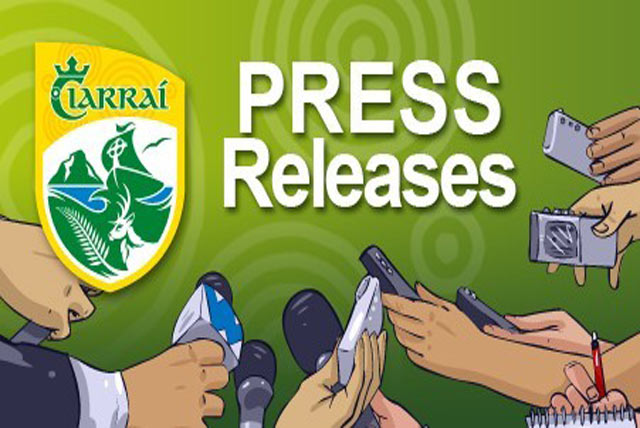 Seo dhibh mo thuarascáil ar ímeachtaí Cumann Lúthchleas Gael i gCiarraí i rith nambliana 2018. Ba mhaith liom mo bhuíochas a gharbáil do gach éinne a chabhraigh liomi rith na bliana.That elusive 5 in a row All-Ireland titles that even the greatest of teams found beyondtheir reach, was finally reeled in by our Minor Footballers in Croke Park in September.Our young stars not only landed the 5 in a row but became the first team to win the AllIrelandMinor Championship at the new U17 age level, while team manager Peter Keanebecame the first and so far only team manager to win All-Ireland Minor titles at twodifferent age levels.While Kerry supporters rejoiced at our Minors’ success, we were left somewhatdownbeat at the failure of our Seniors to qualify for the All-Ireland Semi-Finals followingsome indifferent performances in the new Super 8’s Group style All-Ireland QuarterFinals.Becoming the first team to ever exit the Championship having won our last game was oflittle consolation with the realisation that the result of the other Round 3 game betweenGalway v Monaghan ensured a potential Semi-Final clash with Dublin the followingweekend did not materialise.With Eamon Fitzmaurice announcing his resignation as Team Manager immediatelyafter the game against Kildare, a year that promised so much ended in hugedisappointment.We congratulate Dublin on winning 4 in a row All-Ireland Senor FootballChampionships a feat last achieved by Kerry (1978-81).On behalf of all Kerry supporters, our sincerest thanks to the management team,backroom team and of course the players who committed so much to the cause.

Congratulations to the following:➢ David Clifford – All Star and Young player of the Year.➢ Bryan Murphy & Sean Weir - Selected on Irish Senior Shinty Team➢ Evan Murphy & Fionán Mackessy - Selected on Irish U21 Shinty Team➢ All-Ireland Scór winners Spa & Churchill.➢ Minor All-Stars; Owen Fitzgerald, Colm Moriarty, Darragh Rahilly & Paul Walshwho was also selected as Minor Footballer ‘Player of the Year’.➢ Dr Crokes & Kilcummin on winning Munster Club 2018 Senior & IntermediateChampionships respectively and best wishes to Beaufort in their upcoming MunsterJunior Club Final. Should Beaufort be successful it will be a clean sweep of MunsterFootball Championship titles (x7) for Kerry at both intercounty and Club level in2018.➢ McNamee Awards winners Austin Stacks.➢ To Shane Conway on winning the U21 B Hurler of the Year award for the secondyear in succession.➢ Kerry Camogie team on reaching the All-Ireland Junior Final played in Croke Park.➢ To Spa on launching new Handball ClubClub SceneDr Crokes continue to set the standard in Club football, completing a 3 in a row in theSenior Football Championship. Special mention to Dingle on reaching the Final andbringing a great buzz to the Championship.

This year our senior county footballchampionship was played in one block during the September/October period. With theClub Championships played and completed during the April/May period, all the teamsparticipating (especially the group teams) were able to give the County Championshiptheir full attention, while the uninterrupted flow of the games insured great interestthroughout for both players and supporters.In the Club Championships the new format ensured teams played a minimum of 3 gamesrather than what used to be a straight knock-out competition The new system generatedgreat interest and with a couple of minor adjustments, these championships can befurther enhanced going forward. A particular highlight was the atmosphere and qualityof football served up at the Intermediate and Premier Junior Finals played as a doublebill in Austin Stack Park on Sunday 5 May.Hopefully the national fixtures programme will continue to provide specific time periodsin the calendar year to allow us continue with our new format. I believe this is muchbetter than the stop start nature of competitions that prevailed up to this year.On the hurling front, Lixnaw were crowned county champions in dramatic style withgallant opponents Kilmoyley having a last second penalty saved by Lixnaw goalie MartinStackpool. This year the hurling championship started and finished a little earlier than inprevious years. This new alignment of dates in our fixtures calendar was of particularbenefit to dual players with the Hurling championship completed before the footballchampionship started.For the first time in their short history, Tralee Parnells entered a team on their own in theMinor Hurling Championship. This was an important milestone for a Club that has beengrowing steadily over the last number of years, facilitating the growth and developmentof hurling in the Tralee area. Well done to all involved.We are well served in this County with the structure of our County Football Leagues.Regular games played on schedule is most important for players. The less restrictions onplaying these games the better. The non-availability of an Intercounty player shouldnever be a reason to deprive 30/40 other players from the enjoyment of playing incompetitive and well organised competitions.With regard to minor competition, while respecting the wishes of the Clubs to continueto keep the age level at U18, I believe that only when the minor grade is completelyseparated from Senior and dropped to U17, can we develop a proper games programmefor this level. The reality is that our present minor competitions are not fit for purpose.

DisciplineSome unsavoury incidents involving high profile games and personnel did not serve theCounty well this year. The coverage of these events by the media diverged as seems to bethe norm these days, into two distinct strands. One being accurate, fair and informative,the other inaccurate, over the top and based wholly on hearsay. As a Board we welcomeand take note of the former and try our best to ignore the latter. While the abovementioned incidents have no place in our games, their frequency is thankfully rare enough. Indeed I believe the amount of such incidents in and around the playing fieldshave diminished a lot over the last 20 years. However any such incident is one toomany. Each and every individual regardless of who he or she is, or whatever their rolewith any team is or whether they find themselves on a side-line or in the Stand is subjectto the same laws that applies to everyone else in this country. They must realise andwhere necessary be informed though our clubs and other units that society has notgranted anybody permission to use a sports occasion to justify this sort of behaviour.A more pressing concern is the lack of respect within the Association for those who giveof their time voluntarily, be they referees, stewards, officials, or whoever. The problemhas become endemic and appears at all levels from juvenile to senior games, involvingsupporters, parents, players & team mentors.Why this is so and what can be done about it, I don’t know but I feel rather thanexpending all our energies on the high profile incidents we need as an organisation tofocus on finding solutions to this much more prevalent issue. If left go unchecked, it willdo more damage to our games than problems with fixtures ever will.

Adult Club Coach Education.On a more positive note I would like to complement Coaching &

Games and inparticular Games Development Administrator Mike Quirke for recently developing anddelivering a coaching course for would be Adult Club Coaches.The idea behind this initiative (a pilot scheme for Clubs in the Tralee and surroundingarea has just been completed) is to give up and coming club coaches the confidence,knowledge and skill set to take up the challenge of coaching their own Senior Club team.With some Clubs spending a lot of money every year trying to secure the services of aSenior team trainer, I feel this is a very timely and practical initiative.

Kerry Stars announce their retirement from Inter-County Football.It was inevitable in the aftermath of Kerry’s departure from this year’s Championshipthat some players, having given so much to Kerry over long and successful careers woulddepart the inter-county scene. To all of those players and their families we want to thankthem most sincerely for the fantastic contribution they gave to the county, for theexcitement and joy they brought to all of us and we wish them continued success both onand off the field in the years ahead.Kieran DonaghyIn a glittering career that spanned 14 years, theAustin Stacks man won 4 All-Ireland seniormedals, three Allianz League titles, 10 MunsterSenior Championships, 3 All-Star awards and wonPlayer of the year in 2006.He became one of the most popular players in thehistory of the GAA, and was an outstanding rolemodel for young people all over the country. Darran O’SullivanOur winning Captain in 2009 theGlenbeigh/Glencar star won 4 AllIrelandSenior titles, 9 Senior MunsterChampionship medals, 3 AllianzLeague titles and was selected on the20011 All-Star Team. His brilliantbalance combined with electric paceenabled him to cut through defencesscoring some memorable goals during agreat career.Donnchadh WalshThe Cromane native won 3 All-IrelandSenior titles and received an All-Star awardin 2015. He holds 8 Munster SeniorChampionship medals and 2 Allianz Footballleague titles. A brilliant all round player, heperfected the role of the modern day halfforward, linking play, supporting colleaguesand providing a vital outlet to his defenders.Anthony MaherThe towering midfielder from Duaghclaimed 2 All-Ireland Medals, 2 AllianzLeague medals, 8 Munster Senior Footballchampionship titles and was an All-Star in2015. A superb fielder he developed into abrilliant kick passer of the ball and longrange point scorer. Unfortunately injuryover the last couple of years seriouslycurtailed his contribution and his absence invital games was a big loss to Kerry.

AdministrationMy thanks to my fellow officers for their tremendous work on behalf of the Board duringthe year. We are ably led by our Chairman Tim Murphy whose commitment andleadership ability continues to serve the county well.I would like to thank all our Sub-Committees where so much work goes on. Thank youfor your time and commitment and I hope each and every one of you enjoyed beinginvolved.Congratulations to our Strategic Plan Sub-Committee ably led by Joe Crowley & WillieO Connor who recently launched ‘The Road to Gold’ Kerry GAA strategic plan 2019 -2021.Also congratulations to our Vice-Chairman Diarmuid Ó Sé and his sub-committee fortheir production ‘Stay, Play & Work in Kerry’ a very informative booklet which onceagain emphasises the GAA’s commitment to the local community.This Convention see’s Dermot Lynch complete his 5 year term as Treasurer, having priorto that served for 5 years as Assistant Treasurer. Dermot has made a huge impressionduring his ten years involvement. His revamping of our gate system with the introductionof the ‘Ticket Van’ was a major imitative that will always stand to his vision andforesight. As Treasurer he was diligent in ensuring the finances of the Board were kept ingood order while his ability to explain in simple language, complicated financial data wasimpressive and greatly appreciated.As well as minding the books, Dermot was very involved in securing the support ofAssociate Sponsors for the Board and played a key role with the Austin Stack ParkCommittee for a number of years. When last minute help was needed by any officer overthe years, Dermot was always the first port of call.On a personal level, Dermot was a huge help to me, particularly around ticket time,making sure monies balanced and every now and then lightening up the moment with afunny story. Most of all Dermot, thank you for being a good friend.I have no doubt that your talents will not be lost to the GAA and we wish you the verybest for the years ahead.