Kerry have won the All Ireland Minor Final

You are here: Home/ News/ Kerry have won the All Ireland Minor Final

Kerry have won the All Ireland Minor Final 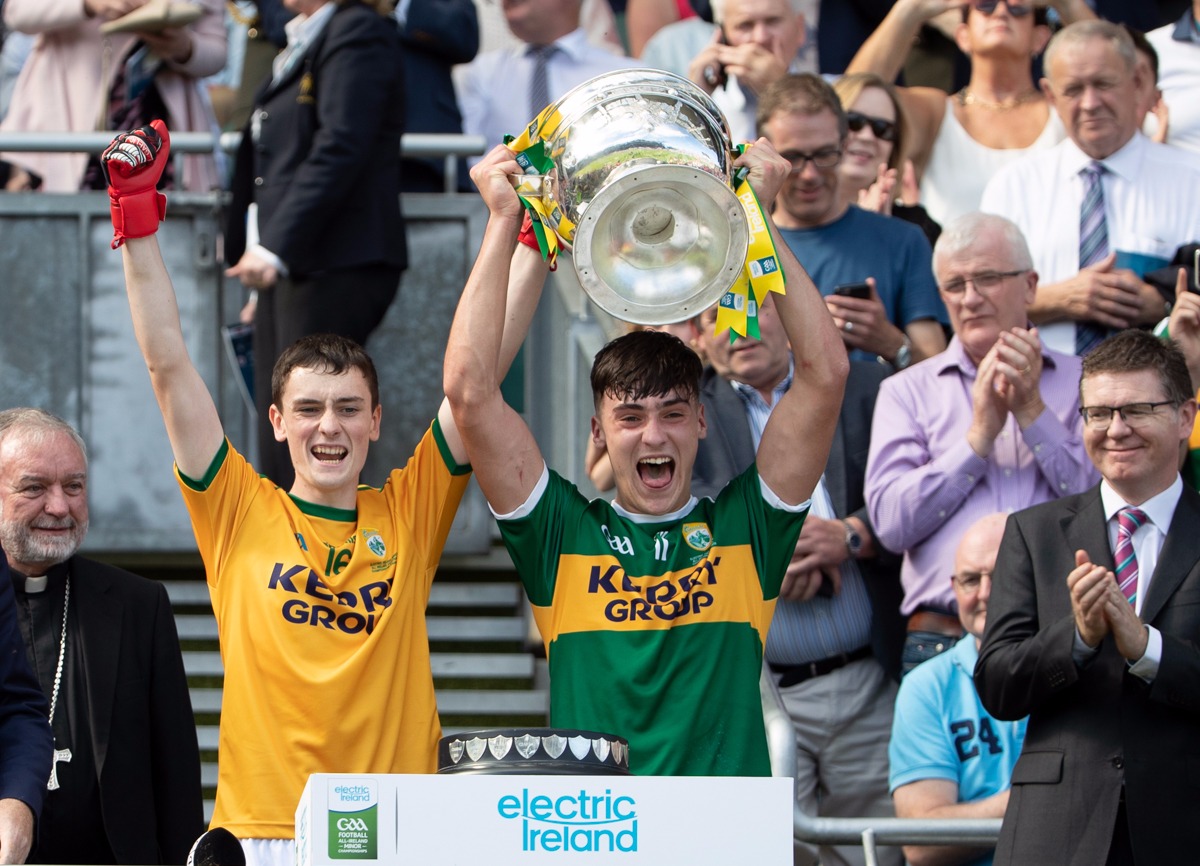 Homecoming tomorrow (Monday) evening at 6pm at Kilcummin GAA Grounds - Please come and give your support to these amazing young men!

Kerry completed a historic drive for five Electric Ireland All-Ireland Minor Football titles in a row by beating Galway in this afternoon’s Final in Croke Park.

They had to show character as well as quality to pull it off, because they were in a deep hole when they trailed by 1-8 to 0-4 after 26 minutes of the first half.

Galway had kicked an unanswered 1-7 to roar into that seven-point lead and were playing with great confidence, but a rally just before half-time gave Kerry hope and they were magnificent in the second 30 minutes.

Galway’s Ryan Monaghan scored the first point of the match after just 18 seconds, but it was Kerry who looked the better team in the first ten minutes of the match.

The two Darragh’s in midfield – Rahilly and Lyne – established an early dominance that ensured a good supply of ball was making its way into the Kingdom forwards.

Star-man Paul Walsh was looking lively in the early running too, and one typically classy point from the Brosna teenager helped Kerry into a 0-4 to 0-1 lead by the 10th minute.

Bit by bit, though, Galway were starting to find their bearings.

Their half-back line of Ryan Monaghan, Tony Gill, and Cathal Sweeny started driving them forward, and midfielders Paul Kelly and Conor Raftery were now the duo dominating the middle third.

The previously isolated Galway inside forwards were now being brought into the game, and Eoghan Tinney and Matthew Cooley looked really lively when they got on the ball.

The increasingly under pressure Kerry backs were fouling in desperation, and Cooley punished them every time they did.

Galway took control by scoring six unanswered points between the 11th and 22nd minutes, and then made an even more emphatic statement by scoring the first goal of the match.

Another flowing move led to an opportunity for full-forward Daniel Cox, and when his shot was blocked it rebounded straight into the path of centre-back Gill who finished a fine first-time shot to the back of the net.

Kerry looked in serious trouble now trailing by 1-8 to 0-4, but they clawed their way back into the game in the five minutes before half-time by outscoring Galway by 0-4 to 0-1.

That meant Galway led at half-time by 1-9 to 0-8, which perhaps wasn’t quite as emphatic a reflection of their first-half dominance as they would have hoped for.

Kerry moved Paul O’Shea from centre-forward to midfield for the second-half, and the team captain was the chief inspiration of their second-half comeback.

He won a huge amount of ball in the middle third and delivered an array of exquisitely weighted passes into his forwards that brought a whole new dimension to Kerry’s play.

They served notice of their renewed intent when Michael Lenihan scored the first point of the second-half, and four more in a row had them 0-13 to 1-9 ahead by the 43rd minute.

Galway were given a badly needed boost by the introduction of substitute Tom Culhane who would kicked two brilliant points, and the match entered a new end to end phase with neither team conclusively dominating.

Culhane’s second-point after a brilliant solo dummy had the teams level at 1-13 to 0-16 on 56 minutes, but it was Kerry who then came with the finishing kick in the final four minutes of normal time plus six of injury-time.

They out-scored Galway by 0-5 to 0-1 in that period, with livewire substitute Ruaidhri Ó Beaglaoích particularly impressive as he kicked his second and third points of the match.

It was an emphatic finish from this young Kerry team, who have written their names into the history books in fitting style.