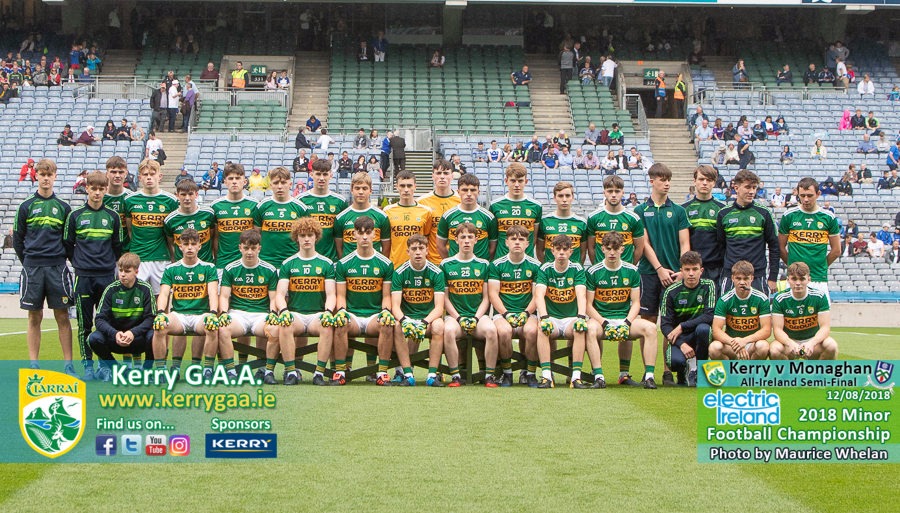 By Paul Keane at Croke Park (From GAA.ie)

There'll be a familiar scene on All-Ireland final day when Kerry participate in the minor curtain raiser for the fifth season in succession.

But Peter Keane's Kingdom charges had to dig deep to come from behind in a dramatic finale to secure their place alongside Galway in the September 2 decider.

The holders, chasing a fifth consecutive title at the grade, looked all certain to win with plenty to spare when they strode nine points clear early in the second-half.

They retained a seven-point advantage with 47 minutes on the clock but a remarkable Monaghan rally that yielded an unanswered 2-2 turned the game on its head.

Goals from Jason Irwin and Mark Mooney drew the game level before Donnacha Swinburne sensationally put Seamus 'Banty' McEnaney's side a point ahead in the 62nd minute.

But they couldn't hold on as they chase a rare final place and late Kerry points from Paul Walsh, 2, and sub Jack Kennelly edged it.

It was, incredibly, Kerry's 29th win in a row at the minor grade and the show of late character was all the more impressive given they lost defender Conor Flannery to 46th minute dismissal.

It'll be a remarkable fifth consecutive final appearance for Kerry who retained their Munster title before taking out Roscommon to set up this last four clash.

They looked good from the off despite the slick, misty conditions with centre-back Dan McCarthy and Darragh Rahilly hitting the game's first two points.

Aaron Mulligan was Monaghan's chief scoring threat beforehand and approached the encounter with 3-22 to his credit.

He added three first-half points though Monaghan were always playing catch up and fell 0-8 to 0-2 down after 20 minutes.

Kerry top scorer Dylan Geaney, brother of 2015 minor final star Conor, hit three points in a row at one stage to help the Kingdom open up that six-point advantage.

Monaghan looked to be in danger of slipping out of the contest as they chased a first final appearance since 1939.

Their hopes of a historic return to the September showpiece appeared to be dashed by a strong start to the second-half by Kerry.

Monaghan needed a goal but it went Kerry's way in the 34th minute when Michael Lenihan picked out corner-back David Mangan who burst up the left, cut inside a defender and booted a low finish to the net.

Paul Walsh and McCarthy added points and suddenly Kerry were nine points clear with a 1-12 to 0-6 advantage.

Monaghan, to their credit, refused to wilt and three converted frees from Sean Jones narrowed the gap and gave them vital momentum.

They almost pulled off a great escape too but Kerry simply refused to relinquish the title and conjured those three late points to win it in thrilling circumstances.